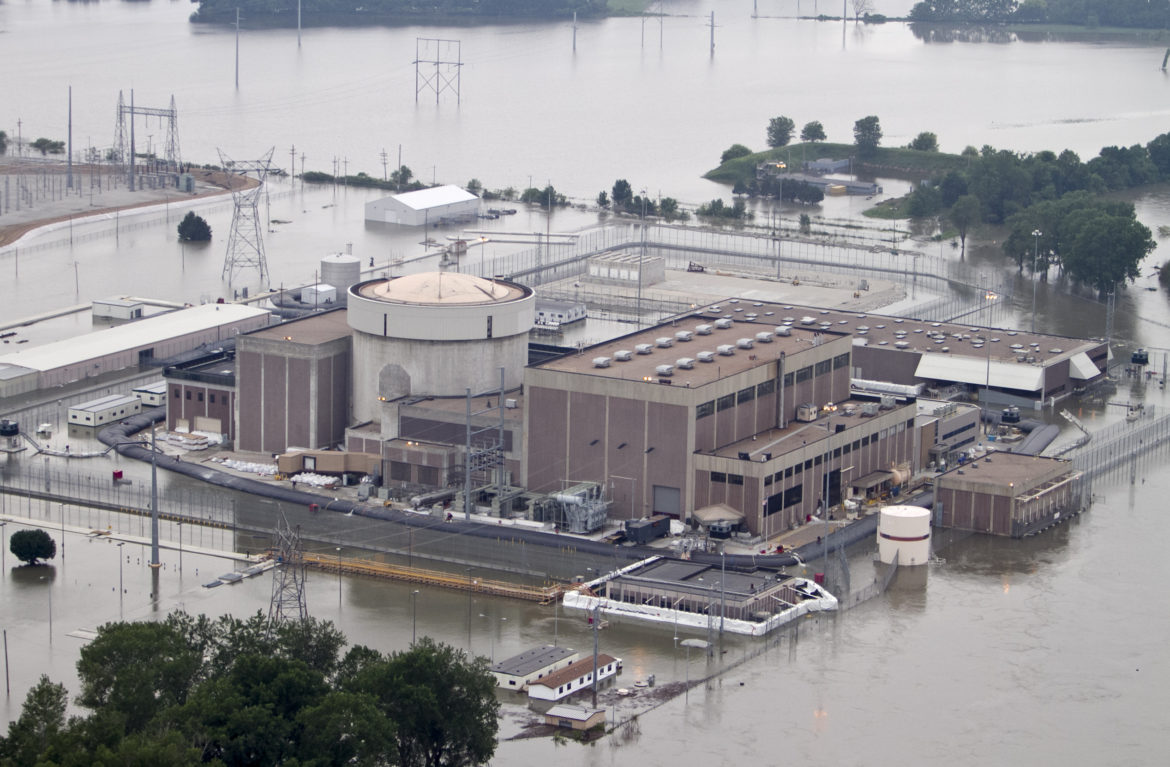 The Fort Calhoun nuclear power station in Nebraska was severely damaged by flooding in 2011 and shut down a few years later. Photo Credit: AP Photo/Nati Harnik

As debates over operating subsidies continue, stresses from rising temperatures and flooding increase the risk.

Illinois nuclear plants are at high risk of climate stress, a new investment report finds, an issue that could become increasingly important for plants across the Midwest as they seek license renewals and consider infrastructure improvements in coming decades.

A report released last week by Moody’s Investor Services found that five of Exelon’s six Illinois plants are at “high risk” and/or more extreme “red flag” risk for both heat and water stress. Exelon’s Quad Cities plant on the Mississippi River, meanwhile, is considered at high risk of flooding.

Nuclear plants need large amounts of water for cooling, so if water becomes too hot or if levels fall too low in the rivers or lakes the plants rely on, or if flooding occurs, the plants may have to temporarily shut down or curtail generation. Opponents of nuclear power note that heat and water stress risks are highest in summer, when the plants are most needed to meet peak demand.

All but Davis-Besse are among the 37 U.S. nuclear plants that have licenses expiring before 2035, the report notes.

“Given pressures to support baseload demand, we expect many nuclear plant operators to file for license extensions over the next decade, given that they have to apply for them many years in advance,” the report says. “Their ability to operate effectively will be affected by these climate hazards.”

Exelon’s Clinton and Dresden plants are among the licenses expiring soonest, in 2027 and 2029, respectively.

On Aug. 27, Exelon announced that Dresden along with its Byron plant will close by next fall unless the state of Illinois guarantees increased payments it says it needs because low energy prices and competition are making the plants unprofitable. But in announcing his energy policy recently, Gov. J.B. Pritzker denounced the measure that Exelon wants legislators to adopt.

Toby Shea, Exelon analyst for Moody’s, noted that while climate impacts are not part of the discussions about legislative supports for Exelon, they will likely be relevant if the plants survive and seek license renewals.

“They’re teetering on the brink of closure,” Shea said. “If they’re needing to invest to shore up the physical risk issues such as heat stress, that would be a wonderful thing for them to have to worry about. Their decision to keep it open or not doesn’t have anything to do with capital expenditures [to address climate impacts] — they can’t cover their operating costs, so any capital expenditure in the future would only compound the problem.”

FirstEnergy Solutions in Ohio has also argued it needs subsidies to continue operating its Davis-Besse plant. But a law passed last year, which critics called a “bailout,” is being reconsidered and could be repealed in the wake of a bribery scandal.

Extreme flooding events, becoming more common as the climate warms, can also have a significant impact on a plant’s economics. The Fort Calhoun nuclear plant in Nebraska, for example, suffered significant damage in a 2011 Missouri River flood and was shut down for three years. Omaha Public Power District, which owns the plant, voted in 2016 to shut it down permanently despite it being licensed to run through 2033.

“The consequences of climate change can affect every aspect of nuclear plant operations — from fuel handling and power and steam generation to maintenance, safety systems and waste processing,” says the report, produced by a Moody’s affiliate called 427.

If companies don’t adequately invest in resiliency measures, their ability to access credit could suffer, the report notes.

Report co-author David Kamran, project and infrastructure finance analyst, said the report relies on climate projections for the area and does not take into account the often considerable resiliency investments the plants have already made.

“These are some of the most hardened assets in the U.S.,” Kamran said. “The post-Fukushima response was pretty robust from the nuclear industry, they put in when needed certain systems to ensure cooling at the plants, backup generators and pumps.”

The report notes that after the 2011 Fukushima disaster in Japan, “updated evaluations of flood and earthquake risk led to modifications of some U.S. plants, including the installation of hardened battery banks, pumps and generators.”

Exelon did not respond to questions about climate change impacts or measures it has taken.

The study defined high risk of heat stress as the area predicted to experience “relatively high changes in extremes compared to global average,” while red flag risk meant the area would likely be “exposed to some of the most severe changes in global heat extremes.” High risk of water stress was defined as “current water stress is likely already high, and water supplies are diminishing.” “Red flag” water stress meant “competition for water resources is extreme, and future water supply failure is possible.”

At least two plants in regulated Midwestern states are also considered at high risk of heat and water stress: DTE’s Fermi plant in Michigan and the Monticello plant in Minnesota.

Moody’s noted that plants on the West Coast and in the Southeast are more vulnerable to flooding, because of the risk of sea-level rise and hurricanes. Those plants are also more likely to be in regulated states where they can recoup costs for resilience investments from ratepayers. The Midwestern plants at higher risk of heat and water stress are largely in deregulated states where they sell their power on the market.

The Moody’s report says that “the credit impact of these climate risks is likely to be more pronounced [for plants in deregulated states like Illinois] relative to regulated/cost based nuclear plants because market-based plants do not have the ability to recoup costs through rate recovery mechanisms, thereby posing a higher financial risk for operators. In certain cases, zero emissions credit programs, such as those found in Illinois, New Jersey, and New York, offer some counterbalancing financial support to operators.”

The zero-emissions credit program, or ZEC, was implemented in Illinois as part of the Future Energy Jobs Act. But it only applies to two of Exelon’s plants, in the MISO market territory, and the company has said it needs more supports to keep its Illinois fleet operating.

Critics of Exelon have long questioned whether the plants are as financially troubled as the company claims. In his energy policy, Pritzker said, “Exelon has refused to show their math,” adding “they are asking us to take their word for it without providing the relevant financial statements for each plant.”

Shea said it would seem in the interest of fighting climate change to make sure the plants stay open — a position increasingly embraced by climate advocates.

“These are very large plants — without additional state support, we’re likely to see at least two of them close,” Shea said. “If you’re talking about climate-related issues, closing two nuclear power plants is a negative.”

He cited Nuclear Regulatory Commission filings in saying that in 1988, Exelon’s Dresden and Quad Cities plants partially or entirely curtailed generation over the course of more than three months because of high temperatures and low river levels. A fact sheet published by Kraft’s group also lists other times generation was curtailed or nearly curtailed at Illinois, Minnesota and Michigan plants, citing official filings.

“The reactors were unavailable when needed most to meet the severe power demands during those heat waves,” Kraft said. “Future predicted conditions will be much more severe and unpredictable. … It is therefore a dangerous gamble — environmentally and economically — to rely on [nuclear power] in a major energy plan.”