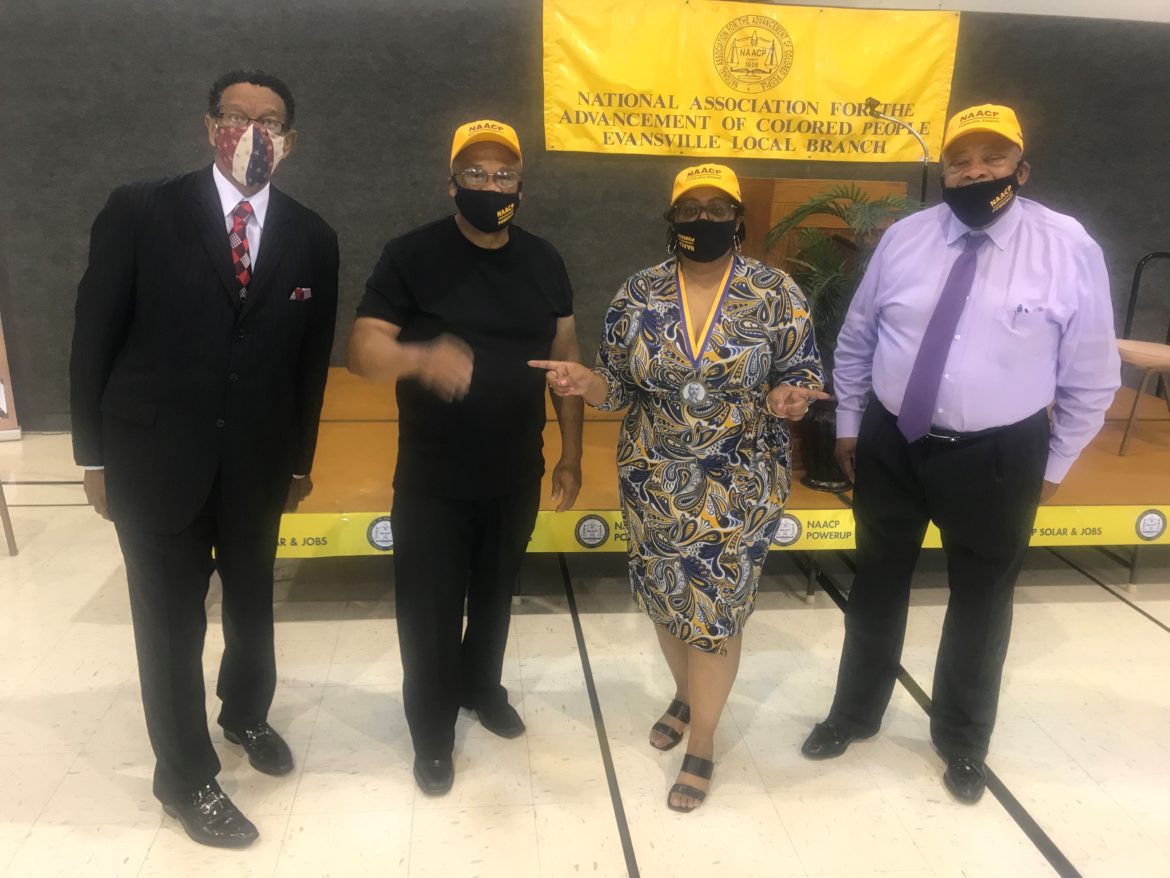 As the solar industry continues to grow, advocates want to ensure that job opportunities are accessible for Black people, who remain underrepresented in the sector.

In Indiana’s coal country, a new program aims to create a “black to green” pipeline, recognizing the disproportionate burden that fossil fuels have placed on Black communities.

The Power Up Solar and Jobs Program, administered by the Indiana State Conference of the NAACP and the Evansville Vicinity Branch, provides instruction and hands-on training in solar panel installation. It is targeted toward unemployed and underemployed workers, as well as formerly incarcerated individuals and young adults between the ages of 18 and 25.

In an interview with the Energy News Network, Denise Abdul-Rahman, a climate justice organizer for the NAACP, explained how smart grid technology and clean energy jobs training fit within the mission of the Evansville NAACP by providing opportunities for local residents.

The interview has been edited for length and clarity.

Q: What need do you see for providing smart grid job opportunities to the African American community in the Evansville area?

A: Our aim is to create a just transition, or a “black to green” pipeline. Jobs in the solar industry prior to the pandemic were growing [tremendously].

Q: How was the Power Up program established in Evansville?

A:  The Power Up program originated with Rosemary Lytle [president of the NAACP’s Colorado/Montana/Wyoming chapter and executive director of Positive Impact Colorado]. When she first launched her Power Up it was with formerly incarcerated, or what we call returning citizens. So that was the model she did. They launched solar on a particular facility there, and then our national office launched solar both in Los Angeles and Compton. One of those models was put on the Genesis Center, which was a center that had domestic violence survivors. And domestic violence survivors were trained on how to build solar. And another model that is in the midst of being launched is in Laredo, Texas.

With the Evansville model, we had conversations with the Midwest Renewable Energy Association. We said, “Hey, you’ve got this online version [of a training program]. How about you customize it for the NAACP by way of giving us a special portal?” So we have a special NAACP portal. We said we want to make it culturally relatable and culturally grounded for our communities. Right now, it’s free because we have it funded with our partners.

Q: How are candidates identified for the Power Up program?

A: People were identified through our local branch on the ground with [Evansville NAACP president] Rev. Gerald Arnold. He’s connected to the community and he’s already a servant leader, a missionary in the community. Our second cohort is expected to start on Oct. 8 and a third cohort with statewide outreach should begin shortly after. We will have Zoom meetings with our identified cohort where we share everything around the climate changing and clean energy.

Q: What kind of training did the cohort receive?

A: They were given six hours of hands-on training, in a solar demonstration house where we brought in a trainer from Bloomington. Each unit had 10 online modules each and there were two units, so it worked out to 20 modules. And they will now have the opportunity to start 16-hour virtual classroom or hands-on training that will lead them to get a solar certification. They can also go to the International Brotherhood of Electrical Workers (IBEW), which offered them the opportunity to apply for apprenticeship.

If for some reason they weren’t able to do that, they could become helpers on a project, or they could become what we call an indentured apprentice. So they can become certified, then get their apprenticeship and then be ready to do the large utility-scale projects with IBEW in Evansville. Or go off to another area that’s not certified and start building. Our local grant was willing to help them gain employment with other opportunities.

With this next cohort, we’re going to expand our offerings in energy efficiency training.

A: Right now, we are the Little Engine That Could, plus we’re in a pandemic. We weren’t really trying to have large groups for the hands-on [training]. Initially we had eight or nine identified, and seven of them actually registered. Four of them completed the training within the timeframe that we billed, which was two to three weeks, very rigorous. Many of them had construction backgrounds, and one of them had a welding background. And so they easily understood this information. It was like transferable skills. I was extremely impressed.

For the next group, like I said, it’s going to include energy efficiency and energy. Right now we have about seven more identified for the next cohort. Some people that registered, we told them to wait till the next cohort. For our next project, we will have folks from Hammond and Evansville. Because we are in the Zoom technology world, we can have people across the state join in. So we’ll do more intentional marketing, to let everyone that wants to participate be able to participate.

Q: How has the coronavirus pandemic impacted your program?

A:  When it comes to the hands-on training, we’ll have to look at a different strategy around that. The only model that we really have that has the nice little demo house with the solar panels on it, an inverter box and the box in the building is in Evansville. With social distancing, we don’t want to have more than four or six. We’ll have to see how we can creatively figure that out. That hands-on [training] was extremely important. You know, after you read all those chapters, and then to touch and feel and see how it all comes together.

Q: Besides COVID-19, what other challenges have you faced with the training program?

A: We had to mail hard copies [to one trainee]. We did have that as a backup. Another person was so determined; he was taking quizzes and reading assignments on the app. We were hoping the library could be a backup. The library access was limited from 11 a.m. to three o’clock and they only had 10 computers. One of the people that did not finish was having computer problems. He was trying to go to the library, I believe, and I don’t think he asked for access to the hard copies. We would like to identify a technology partner that may be willing to provide laptops to people. We know that we’ll be looking and reaching out for that as we go along.

Q: You mentioned the “black to green” pipeline earlier. Could you say more about that?

A: Oh, that’s a term I have to credit to the national office and to our director Jacqueline Patterson. That just goes to the fact that there’s all these clean energy jobs and we only hold [a small percentage] of them. But yet, the BIPOC [Black, Indigeonous, People of Color] community hosts all the pollution of the polluting systems. So how can we get a just transition? How can we get a just transition for our communities, and the jobs of course.

The other part is everything from bringing it early into our children’s schools, putting it into our communities so people can visually see it and learn it. To access that black-green pipeline, and also creating these apprenticeships and internship opportunities. The black-green pipeline is inclusive of “How many energy efficiency jobs can we create?”

Q: You mentioned that you were impressed by the transferable skills of people in the program. Could you discuss that further, as well as possible hurdles in transitioning to clean energy jobs?

A:  Brad Morton of Morton Solar talks about how his family, his father, I believe, was a coal miner. How he then started a solar company. He was rooted in how that was our original system and form of energy. Certainly we want coal workers to transition from coal. We want them to see the opportunity in clean energy. We think that their skills obviously could be transferable.

We have to change all of our broken systems. We have to bring everyone forward — create the new and stop the bad. Even though it has served the coal miners for many years as far as feeding their families. For the risks that they’ve had to take and the sacrifice for the rest of us to be able to turn the lights on is a major sacrifice. It’s unfair and they should be afforded a just transition and access to clean energy jobs and other opportunities. We’ve created a model that may be quite easy for them to do.