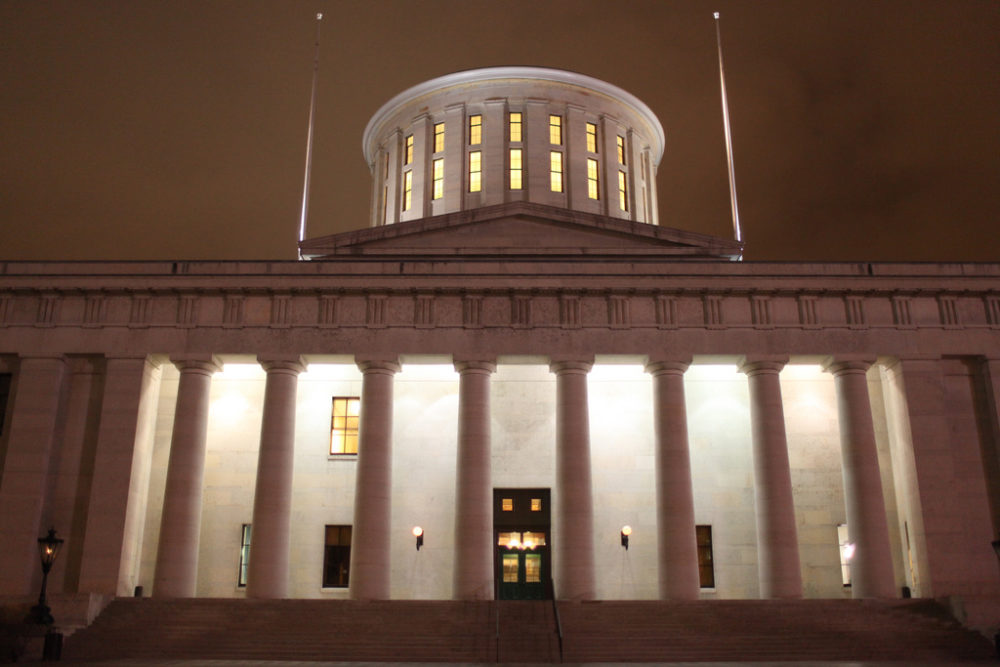 The Ohio Statehouse in Columbus.

The bill singles out wind energy, frustrates property rights and “would be fatal” to the state’s wind industry, critics say.

Ohio lawmakers are looking to erect more hurdles to wind energy in the state.

House Bill 401 would let opponents compel individual township referendums on new or modified wind farm projects after they get approval from the Ohio Power Siting Board.

“Nobody’s going to build anything under threat of a township referendum,” said Andrew Gohn, eastern regional director for the American Wind Energy Association. “That approach would be fatal to the industry because of the regulatory uncertainty that it would impose in the state.”

The bill is an about-face by primary sponsor Bill Reineke, R-Tiffin. “Property rights should never be subject to a vote,” he said last year, talking about the tensions between concerned neighbors and landholders wishing to lease land for turbines.

In his sponsor testimony on Nov. 13, however, Reineke said, “If there is a majority, either silent or vocal, for or against these projects, then there should be a local vote!” He testified that he had gotten “overwhelming, let me stress overwhelming, constituent outreach.” He did not return a call or email Thursday afternoon.

The bill would give wind farm opponents 90 days after a siting board approval to collect signatures calling for a referendum from 8% of a township’s voters. That, in turn, would trigger a special township election to accept or reject the approval at either the next primary or general election.

“These behemoths are going up in our backyards, and, currently, there’s very little that residents can do to ensure they get a say,” Reineke said. He did not discuss the fact that Ohio law lets affected parties intervene in regulatory proceedings and also calls for notices and meetings for interested residents.

“The public isn’t being shut out,” said Tyler Duvelius, executive director of the Ohio Conservative Energy Forum. “There are ample times for them to make their voices heard in the process.”

The bill would apply not only to new projects, but also to most amendments to previously approved projects. Examples would include minor changes to turbine heights, diameters, or placement made to take advantage of the latest equipment or to account for local site conditions. As a result, the bill could give opponents multiple opportunities to block a wind farm, even if a project is already underway.

The bill also ignores the lengthy approval process in place at the Ohio Power Siting Board, said attorney Miranda Leppla at the Ohio Environmental Council Action Fund. “The OPSB’s process is rigorous, is science-based, and is the appropriate place to evaluate a wind project proposal,” she said.

If a township voted down a licensed approval or amendment, HB 401 would then require the state licensing board to revise the permit to exclude the township. However, the board could not make other changes. As a result, wind developers might be unable to adapt or redesign their projects to account for any carve-outs.

“These projects often cover several townships, and if you were to interrupt the project in the middle for one township that didn’t vote to support it, you might have an unbuildable project,” Gohn said. For example: “What if all the townships were fine [with the project] except for the interconnection point? It’s not a workable construct.”

Singling out a sector

Reineke quoted Eden Township resident Shanna Price in his sponsor testimony, claiming that there’s “no other utility or thing that can happen in your community that transforms it into an industrial zone and you have no say in that process.”

In fact, the bill would single out wind energy projects for special treatment — an approach Gohn said would be “deeply unfair.”

Ohio wind farms are already subject to restrictions such as property line setbacks that are stricter than those for other types of energy resources. A 2014 budget bill amendment tripled those setbacks without any opportunity for industry or property owners to testify before lawmakers.

Polling by the Ohio Conservative Energy Forum shows that most Ohioans would prefer to relax the state’s property line setbacks for wind turbines, Duvelius noted. In his view, HB 401 is “antithetical” to individual property owners’ rights.

“There’s a strong belief among Ohioans that if it’s your land, it ought to be your rules on your land,” Duvelius said. “My land, my rules.” As he sees it, letting others say what you can and cannot do on your land is “not who we are, either as Ohioans or Americans.”

Similar arguments arose when cellphone towers first went up a few decades ago and before that when power lines went up, he added. Society now depends on much of that infrastructure.

The new bill comes on the heels of the passage of HB 6 earlier this year, which effectively guts Ohio’s renewable energy and energy efficiency standards. Similar provisions for township referendums on wind energy were removed before a final vote on that bill.

Before HB 6 passed, several efforts had been made to relax property line setbacks in order to allow for more wind energy development. Although the Ohio Senate would have allowed that, those efforts were blocked in the Ohio House of Representatives.

The House Energy and Natural Resources Committee held its second hearing on HB 401 on Nov. 19, with statements from more than 100 wind energy foes. Opponents will have an opportunity to submit testimony in one or more future hearings.

Meanwhile, industry supporters worry that Ohio could be missing out on opportunities. The levelized cost for new wind and solar generation is already cheaper in most parts of the country than the costs to keep running existing coal plants. Many companies look for renewable energy resources when they consider building new facilities in a state. And Ohio has some of the best wind energy resources in the PJM grid area, Gohn said.

“House Bill 401 is yet another example of Ohio legislators singling out wind from all other forms of energy generation, and continuing to impede an industry that could bring significant economic and environmental benefits to Ohio,” Leppla said.

“The fact of the matter is this is a slap in the face to the renewable energy industry,” Duvelius said. “This is a way for us to go in the other direction that we want to go in, in terms of procuring more of our renewable energy in Ohio.”

He added, “We need to make sure we’re not prohibiting development in an emerging industry.”