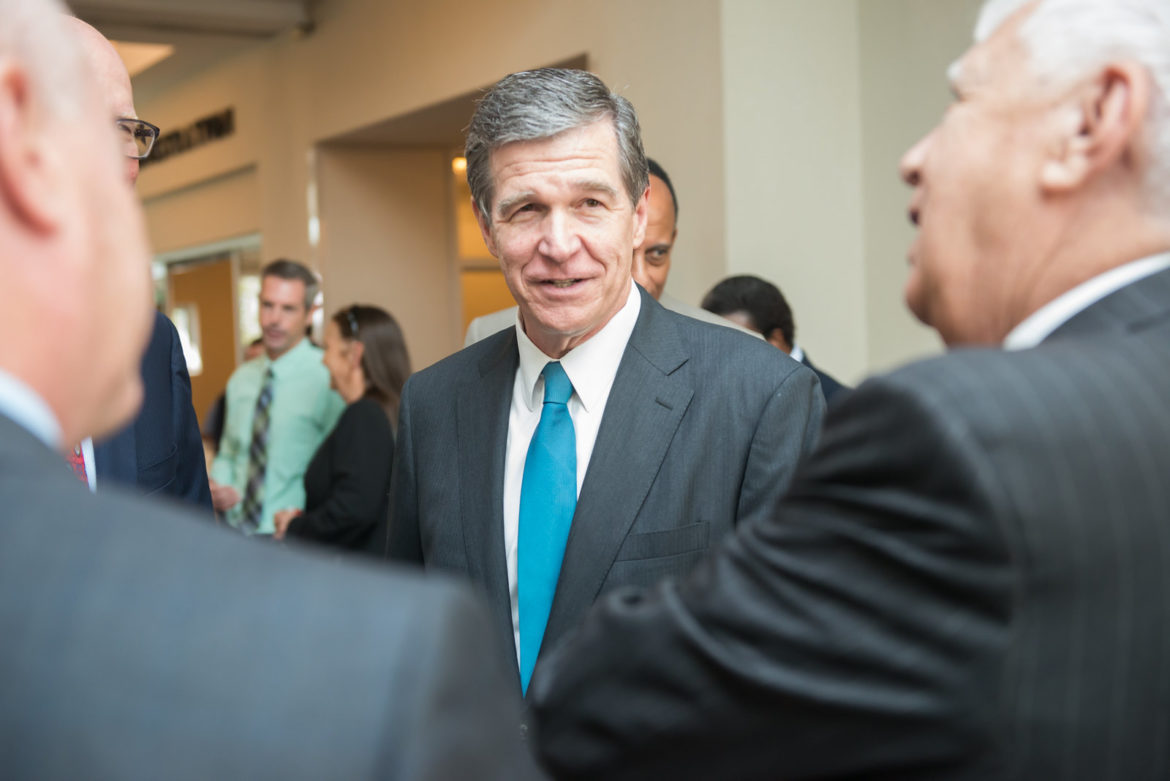 After a three-year political struggle over spending authority, state lawmakers approved a plan with little fanfare.

Clarification: This story has been updated to clarify that while Cooper dropped his appeal of the 2017 Volkswagen budget language, the case over the 2018 language is still active.

After years of battling over control of North Carolina’s share of the Volkswagen settlement, the state’s Republican-led legislature and Democratic governor have reached an anticlimactic détente.

With little discussion and not a single dissent, lawmakers appropriated $31 million from the automaker’s multibillion-dollar nationwide trust fund in the final hours of their regular legislative session. Last week, Gov. Roy Cooper signed the measure into law with equally little fanfare.

The first of three installments, the funds will mostly be spent on replacing old, dirty school and transit buses with more efficient and zero-emission models, in accordance with a plan the Cooper administration finalized nearly two years ago.

That blueprint, which also sets aside money for electric vehicle charging stations, hasn’t drawn any public objections from lawmakers. But it has been stalled by a philosophical debate — flamed by partisan animosity — over who holds the purse strings for windfalls like that from Volkswagen.

Since 2017, lawmakers have been winning that argument, leaving the Cooper administration little choice but to wait for this summer’s appropriation before moving ahead with its clean transportation plans.

With that allotment now reality, the administration expects money that had been on hold for months to begin flowing soon, and clean energy advocates are breathing sighs of relief.

“Other states have already started spending their money,” said Cassie Gavin, the chief lobbyist with the North Carolina Sierra Club, “and it’s definitely time for North Carolina to get in the action.”

For six years, Volkswagen sold over a dozen diesel models with computer software designed to fool tailpipe inspection tests, allowing them to spew up to 40 times the legal pollution limit. Regulators caught the automaker in 2015, ultimately extracting a massive settlement that includes a $3 billion mitigation trust fund, distributed to states according to how many affected vehicles they registered.

Under the settlement’s terms, only certain projects that curb air pollution can be financed by the trust fund, and governors must choose a single agency to develop plans to spend the money in three phases over 10 years. The settlement’s trustee must approve each plan and then, in a separate step, disburse the money.

The restrictions are designed to prevent wayward expenditures by states or their legislatures.

But they irk many in the North Carolina General Assembly, who say the state constitution gives them — not the governor or any of his agencies — the sole power to appropriate money in the state.

“It’s a legislative-versus-executive-authority issue, and I think it’s a legitimate constitutional issue,” Robin Smith, an environmental attorney and former assistant secretary at the Department of Environmental Quality, told the Energy News Network back in 2018.

“What the legislature has been saying,” she added, “it has been saying for a good while: ‘There is not supposed to be any free-floating money spent by the state agencies.’”

Indeed, even with Republican Pat McCrory in the governor’s mansion, lawmakers had passed a measure requiring appropriations of any settlement funds in 2014. But Cooper’s narrow win in 2016 only heightened the power struggle, especially as Republicans held a veto-proof majority in both chambers.

In 2017, lawmakers adopted a budget provision asserting authority over the Volkswagen money despite Cooper’s veto. The governor added that budget language to a lawsuit alleging a number of unconstitutional power grabs by the GOP. He lost in April 2018 in Wake County Superior Court but later appealed.

That summer, again overriding the governor’s veto, Republicans tweaked the budget law to tighten their control over the money — a move critics worried would disqualify the state from receiving the funds altogether. The 2018 provision, still in effect today, states, “no funds by may be expended under the Plan … until the General Assembly has appropriated [them].”

Cooper officials proceeded to develop their Phase I plan, submitting it to the trustee in August of 2018. It devotes 60% of funds to converting diesel school and transit buses to cleaner-burning and electric models, 20% for replacing diesel equipment, and 15% for electric vehicle charging infrastructure — the maximum amount allowed under the settlement.

Lawmakers never voiced qualms with this strategy. And after Republicans lost their supermajority in the fall of 2018, Cooper and other Democrats had leverage in 2019 to change the language or get the Volkswagen funds appropriated.

It wasn’t to be. Cooper offered to drop his complaint about the 2017 Volkswagen language, but refused GOP demands to abandon his entire appeal of the Superior Court ruling, and the budget provision remained intact. Due to a logjam over teacher pay and expanding Medicaid, the state never adopted a comprehensive budget for the fiscal year that ended July 2020. While lawmakers passed a series of stopgap spending measures, none included the first round of Volkswagen spending.

Another dustup arose in November, when lawmakers tucked into a popular disaster relief law more restrictions on monies not collected from state taxpayers. Legislative leaders told the Raleigh News &Observer the limits were in reaction to the controversial environmental mitigation trust fund the governor had negotiated with developers of the now-defunct Atlantic Coast Pipeline; Cooper’s office said the restrictions could also threaten the Volkswagen monies.

‘More necessary than ever’

Still, the Cooper administration did all it could to move its Phase I plan along, issuing a request for proposals due last fall. Applicants eager to install electric vehicle charging stations, replace school buses, and the like became vested stakeholders who could lobby for this year’s appropriation.

Rep. Chuck McGrady, a Hendersonville Republican who is among the chairs of the House appropriations committee, continued to mediate between Cooper’s office and GOP leaders. “I kept pushing,” he said over email.

When lawmakers returned this spring amid the pandemic, they waged plenty of partisan battles over reopening. But they punted on long-running arguments over issues like Medicaid expansion. They disbursed federal funds, adopted another series of “mini-budget” bills, and — with the state’s Tax Day moved to July 15 — braced for new projections about available revenue.

It was in this arguably more cooperative environment that McGrady’s wide-ranging funding bill that included Volkswagen appropriations, House Bill 1087, passed in the session’s wee hours, without a ‘no’ vote in either the House or Senate.

“My view is this happened in some part because we worked to solve problems and vetted drafts of the legislation with the Cooper administration and with Democratic leaders,” McGrady said of H1087 and other popular measures he spearheaded. Both the substance of the bills and their drafting process, he wrote in his constituent newsletter, “drew praise from both Republican and Democratic legislators.”

Stan Cross, who directs electric transportation policy for the Southern Alliance for Clean Energy, said unlocking the Volkswagen funds was particularly vital in light of the pandemic-induced economic freefall. “It’s money that’s earmarked to flow into the North Carolina economy and support jobs,” he said. “In the present moment, that is more necessary than ever.”

The $3.4 million dedicated to installing fast-acting electric vehicle charging stations around the state, will provide an especially meaningful boost, Cross said. “Those contractors and electricians then have to buy conduit, and rebar and wire and other equipment,” he said. “A significant amount of that money is going to find its way into the local economy.”

By paying the difference between the cost of a lower-emission diesel school bus and a zero-emission electric school bus (about $215,000), Duke hopes the state will convert more buses to electric than it would otherwise under the settlement.

But other aspects of Duke’s proposal have split clean energy groups and the state-sanctioned consumer advocate, and it’s still sitting with the North Carolina Utilities Commission, where it’s been for over a year. Perhaps, advocates say, with the Volkswagen monies finally greenlighted, regulators will make a decision. “The commission seems like they have everything they need to rule,” Cross said.

With the settlement funds secured at last and the Cooper administration having reviewed and scored all the Phase I applications, its next step is to announce awards, a move that could come as soon as this month.

Perhaps then, Cooper officials will do a little more public celebrating. But for now they’re laying low. The governor signed H1087 among two dozen bills, and made no statement about it. Asked about the measure by email, Ford Porter, a Cooper spokesperson, said only, “the governor wants these Volkswagen settlement funds to be used toward a clean energy future for our state.”

While the first third of North Carolina’s share of the Volkswagen funds is now secure, it’s not clear if that’s the model lawmakers and the governor will use in the future. Presumably at some point, the state will return to normal, rather than piecemeal, budgeting. And the tug of war over spending authority continues: While Cooper last fall quietly dropped his appeal of the 2017 Volkswagen language, the lawsuit over the 2018 language is still pending in the lower court. The governor, Porter confirmed, still believes the provision is unconstitutional.