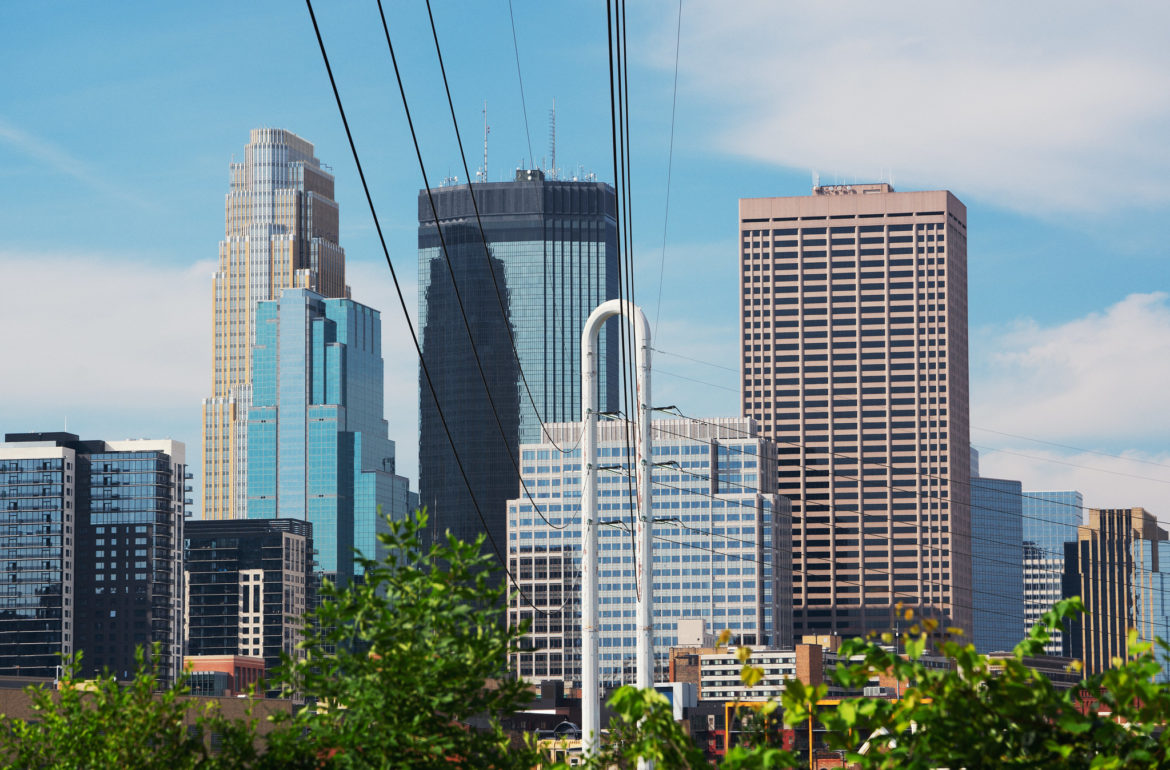 Downtown Minneapolis as seen from Nicollet Island on the Mississippi River.

The city has issued a “request for information” seeking alternatives to a utility green tariff program.

Concerned it may be paying too much for renewable power through an Xcel Energy program, the city of Minneapolis has invited other companies to submit ideas on powering all city operations with clean electricity.

The “request for information” asks companies for clean energy at prices below what Minneapolis pays currently to Xcel’s Renewable Connect program, and for strategies on meeting several other objectives.

Renewable Connect is Xcel’s green tariff program. The largest subscribers are the state of Minnesota and the city of Minneapolis, which pays a premium of 6 to 8 cents per kilowatt-hour.

The city’s interest in alternatives was also heightened by an announcement last year that Xcel would build two wind farms dedicated to powering a $600 million Google data center in Becker, Minnesota, he said. A long-term power purchase agreement of the kind offered to Google would remove the price uncertainty that comes with being a Renewable Connect subscriber.

A power purchase agreement “would give us fixed pricing,” Millberg said. The program’s pricing is unknown because the city and other subscribers only see it at the end of each billing cycle. Renewable Connect replaces the fuel clause charge customers see every month and that changes based on market conditions.

Regulators approved the arrangement between Xcel and Google this year. “Asking them to do the same for us is one possible outcome of this project,” Millberg said. “Or they may say we have a new Renewable Connect program and it’s going to be cheaper.”

The city’s decision to look elsewhere for less expensive renewable energy highlights a nascent debate over whether Renewable Connect and other green tariff programs like it across the country are exploiting a growing desire by cities and companies to purchase clean energy.

Minneapolis officials wonder why the premium remains so high at a time when wind and solar prices have plummeted. With two Renewable Connect contracts up for renewal in a few years, Minneapolis could opt for a company that owns and manages solar on government buildings and on land outside the city, Millberg said.

If Minneapolis was to buy electricity from a company other than Xcel it would have to pay the utility to transport the electricity, he said. In the past, the expense “was so high it was not worth it,” Millberg said.

The city also emphasizes it will not buy renewable energy certificates from existing wind and solar installations to meet climate change goals. Instead, Minneapolis wants new clean energy projects to be built to cover electricity needs.

Xcel submitted information on a new Renewable Connect green tariff program to the Public Utilities Commission that provided no pricing information, Millberg said. The utility has told the city it will be less expensive, though how much remains unclear.

Xcel argued in a statement to the Energy News Network that Renewable Connect provides some certainty over electricity pricing during the length of a contract and added that the contract reflects wind, solar and infrastructure costs along with program administration.

If the fuel cost on customers’ bills that Renewable Connect replaces grows larger customers could receive cost savings, Xcel said. The program’s next round will have lower prices for lower-term contracts and cost about the same for customers enrolled in the month-to-month option, the utility said.

The program also offers customers a pathway to “confidently state” they power their businesses and homes with renewable energy, an important advantage for companies with clean energy goals. The utility said it is currently reviewing the city’s request for information.

Minneapolis was one of the first customers for Renewable Connect and has two contracts ending in mid-2023 and 2027. The city wants to invest in on-site renewable generation or energy efficiency savings totaling between 60 and 80 million kWh by 2023, Millberg said. The 2027 contract is for 17.8 million kWh, which the city might want to replace under the same contract with a new vendor or Xcel.

Who outside of Xcel is likely to bid? The city has received inquiries from local solar firms and energy conservation companies that manage and own large clean energy projects, Millberg said.

Kim Havey, the city’s sustainability director, said he thinks energy service companies are likely prospects. An example he pointed to is the University of Minnesota’s decision to hire Ameresco, a Massachusetts energy service company that will build and manage 2 megawatts of solar on nine Twin Cities campus buildings.

Other cities are also seeking greater control over where they get their electricity. Utah passed legislation this year allowing communities to pool electricity needs and purchase energy collectively from Rocky Mountain Power, Havey said. Salt Lake City, Park City and Summit County will be the first participants.

The request for information and potential changes that follow will not affect subscriptions Minneapolis has with 24 community solar gardens that cover about 6% of its energy needs. Millberg said community solar could represent 22% of the city’s energy generation by 2022, the year it expects to meet its 100% renewable goal for city operations. As much as $4.7 million will be saved over the next two decades on solar garden subscriptions, city officials say.

As for replacing the Renewable Connect contracts, Millberg figures he will have a better idea who might respond and what ideas they might propose after a pre-proposal conference takes place later this month.