Roger Arnold is a systems architect and engineer, recently focusing on energy systems and controls. His consulting company, Silverthorn Engineering, is developing architectures and software for...

If solar energy is to become the mainstay for a future “100% renewables” energy economy, then there are two fundamental problems that need to be resolved. One is obvious: the diurnal or day-night variation. It’s usually assumed that progress in storage battery technology will take care of that. That may or may not come to pass any time soon, but it’s not what I wanted to talk about here. What I want to talk about is the other problem: seasonal variation. It involves a different set of issues.

As the chart below shows, the simple difference in summer vs. winter hours of daylight, even at a low subtropical latitude of 30°, is substantial: 14 hours vs. 10 hours. Cities near that latitude include Houston, Cairo, and Shanghai. At  ~ 40° latitude (Rome, New York, Denver, ..), the difference rises to 15 hours vs. 9 hours. At ~ 50° (Paris, London, Brussels, Frankfurt, ..) it’s 16 hours vs. 8 hours -- a full 2:1 ratio. Yet the difference in daylight hours understates the actual difference in solar output. The average elevation of the wintertime sun is low, making losses to atmospheric dust and clouds significantly higher than in summer. As a result, the actual summer to winter output variation at the latitude of London is typically 3:1 or higher, not 2:1. 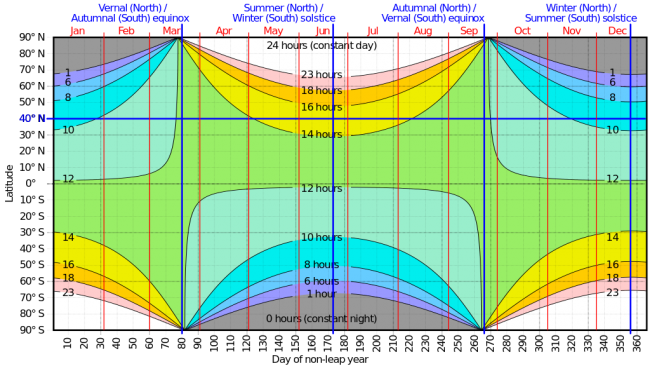 The seasonal variation in solar output means that solar cannot be the principal energy resource in higher temperate latitudes unless capacity is heavily overbuilt. Compounding the problem is that, in such latitudes, increased heating and lighting loads tend to make winter demand greater than summer demand. Building enough capacity for winter months means that there would be a very large excess of capacity for summer months.

In most regions, wind energy is not subject to the same kind of seasonal variation as solar. So if an appreciable fraction on winter energy demand can be supplied by wind, the relative gap in energy supply between summer and winter can be reduced. Nonetheless, whatever amount of solar energy is delivered over the winter months, the amount delivered over the summer months will be several times larger.

A commonly proposed solution to the imbalance is power-to-gas (P2G). Excess summer capacity is used to make hydrogen by electrolysis of water. The hydrogen produced is either stored as is, or reacted with CO₂ to make methane -- synthetic natural gas (SNG). The stored hydrogen or SNG can then be used for wintertime heat and power, offsetting low solar output in those months.

PEM electrolysis cells are still being refined. The technologies employed haven’t been stable enough for long enough to reliably predict depreciation rates for tomorrow’s cells. However, deterioration of membranes and catalysts over time has historically been an issue. So a combined cost of capital + depreciation of at least 12% should probably be figured. On that basis, CC+D for electrolysis cells alone would contribute $360 / 8760 hrs/yr or 4.1¢ per kWh for power generated from stored hydrogen. That would be a best case figure, when the electrolysis cells are utilized at 100% capacity factor. With a more realistic CF of 33% for surplus power in summer months, the electrolysis CC+D contribution jumps to 12.3¢ / kWh.

And that brings me to the point of this posting. As it happens, the world really does have both a northern and a southern hemisphere -- even if those of us in the northern hemisphere tend often to forget and talk as if there were only one. And not only are there two hemispheres, it happens that when it’s winter in one, it’s summer in the other.

So here’s a thought. Where feasible, instead of letting a lot of costly capital equipment sit idle all winter for lack of power, why not build it with the form factor of a shipping container, and let it do what birds do: migrate. Spend spring and summer somewhere in the northern hemisphere taking advantage of cheap surplus solar power. Then, come fall, “fly south” and take up residence there for another spring and summer. The process could effectively cut the capital cost of electrolysis equipment for P2G by almost half.

Whether that’s practical in any given case will naturally depend on a range of factors. The size and mass of the equipment in question, the cost of long distance shipping, the relative ease or difficulty of integrating the equipment into whatever overall system it operates within, as well as the relative importance of cheap energy to the output product -- all figure in. But for electrolytic  production of hydrogen, the case should be fairly straightforward.

Polymer electrolyte membrane (PEM) electrolysis cells are notably compact and lightweight for the power they use to split water. I don’t have specific numbers that are current, but I’d expect that at least 10 megawatts of electrolytic capacity could fit within a 20 foot shipping container. For interfaces, the package needs plumbing connections for pure water in and pressurized hydrogen and oxygen gas out. It also needs a DC power input connection, and a digital interface for control and monitoring. But that should be about it. The cost of the equipment and the value of what it produces should easily justify the cost of moving it twice a year to keep it productive.

Equipment that moves from place to place for efficiency of use is nothing new. Large wheat combine machines, for example, migrate from one farm to the next over large regions during harvest season. The goal is the same: to improve utilization of a costly resource. The factor that limits utilization in one area and motivates migration is different; For the combine, it’s completion of its harvesting work on one farm; for a PEM electrolysis unit, it a decline in available surplus power. But the principle is the same.

Migration is not something we normally think of in connection with energy resources. There could be issues I haven’t considered that would make it impractical. Nonetheless, it seems a useful option to think about when confronting the problem of seasonal variability of solar output.