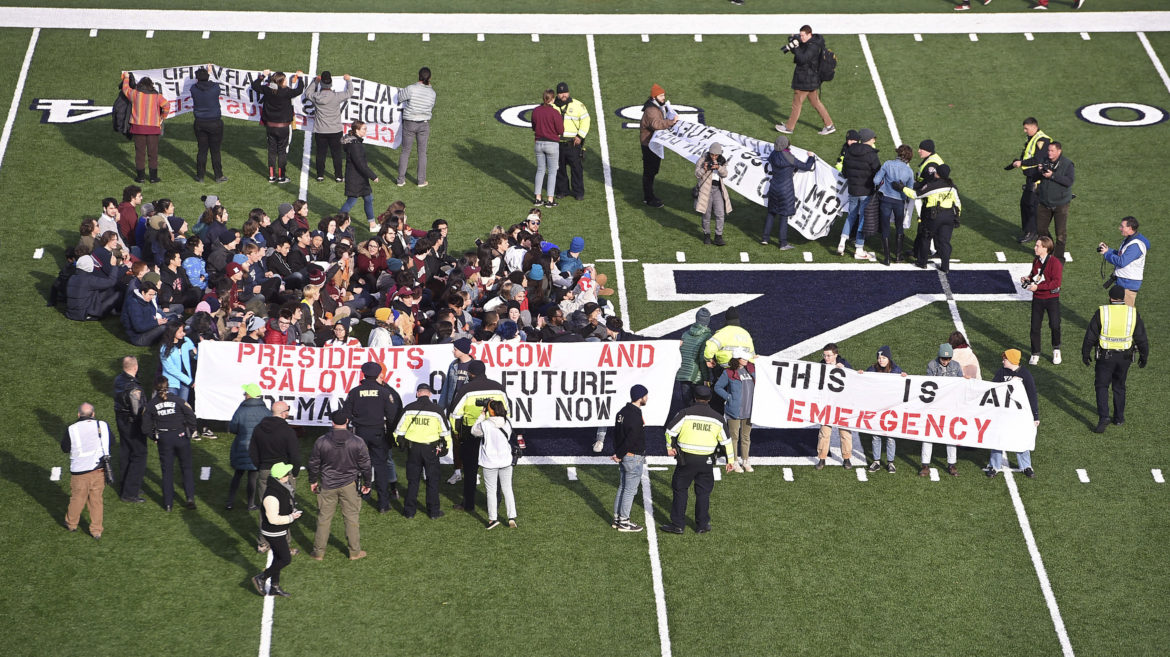 Divestment demonstrators delay the start of the second half of a college football game between Harvard and Yale on Saturday, Nov. 23, 2019, in in New Haven, Connecticut.

An analysis by MassDivest makes a case for fossil fuel divestment based on financial rather than moral grounds.

An analysis released by Massachusetts climate activists concludes the city of Somerville’s retirement fund lost out on $475,000 when state authorities barred it from removing fossil fuel investments from its portfolio. The report arrives just as the state Legislature is considering a bill that would clear the way for county and municipal pension funds to pull out of fossil fuel stocks.

“There is an opportunity cost that has been suffered by Somerville pensioners,” said Colby Cunningham, spokesperson for MassDivest, the organization that completed the analysis. “The fossil fuel industry is in decline — that’s a continuing trend.”

The idea of fossil fuel divestment, in which investors pull their money out of any companies in the fossil fuel business, has gained momentum this year. Last month, the European Investment Bank, the lending arm of the European Union, announced its plans to phase out financing for fossil fuels by 2021. Students at colleges and universities across the country are demanding their schools divest their endowments; last week, divestment campaigners from Harvard and Yale stormed the field at the universities’ football game to protest the schools’ continued investments in fossil fuels.

More than 1,140 institutions have pledged to remove $11.5 trillion from investments in the fossil fuel sector, according to Fossil Free, a project of climate action group 350.org.

Traditionally, much of the debate about divestment has focused on the ethics and efficacy of the practice: Is divestment the right moral choice and does it actually prompt change in targeted companies? Recently, however, a new argument has become part of the conversation, as more and more people contend that investing in fossil fuels is a bad choice, not just ethically, but financially as well.

“Fossil fuels have been a terrible investment for at least the last five years,” said Elizabeth Levy, a partner at Boston-based Trillium Asset Management, which has offered fossil fuel-free investment options for 20 years.

The Somerville report is the latest in a growing body of evidence that fossil fuels might be a shaky investment choice.

Somerville’s attempts to divest its retirement fund began in 2017, when the city retirement board decided to move about 4.5% of its portfolio into a fund that does not include fossil fuel companies. The money had been in a fund tied to the S&P 500, an index of major stocks that is widely considered one of the best economic indicators in the United States. The new investment replicated the S&P 500, but removed any companies among the top 200 fossil fuel businesses in the world.

However, the change was brief. The Massachusetts Public Employee Retirement Administration Commission, the regulatory body that oversees public pension systems, rejected the move, contending that avoiding a whole class of investments on moral grounds would violate the fund’s fiduciary duty to achieve the best financial results for its participants.

Somerville responded by filing a Home Rule petition, a request to the Legislature that the city be given the authority to make this decision for itself. When the petition failed, Somerville leaders and local divestment activists began working with sympathetic state legislators to file a bill, currently pending in the Legislature, that would allow most of the municipal or county retirement funds in the state to choose to divest from fossil fuels.

To strengthen its argument that divestment can be a wise choice, MassDivest decided to determine what would have happened to the once-divested funds, had they been allowed to stay in the fossil fuel-free fund. The analysis found that the S&P 500 had a 19.1% rate of return between July 2017 and June 2019; the version with fossil fuel stocks removed earned 24.1% over the same period.

Numbers like these are why Somerville is so committed to pursuing divestment, said Oliver Sellers-Garcia, director of Somerville’s Office of Sustainability and Environment.

“There is a genuine concern that because so many people in our global community see the writing on the wall that it’s just not a wise investment,” said Sellers-Garcia said.

Though fossil fuel companies have historically been solid investments, the trend has shifted over the past several years, Levy said. New technology, dropping prices, and government incentives have made renewable energy, energy efficiency, and electric vehicles more accessible to everyone, slowing the growth in demand for fossil fuels, she said.

“There has never before been a real alternative to fossil fuels,” Levy said. “But there is now, on both the vehicle and energy generation sides.”

Furthermore, she said, any desired characteristics of fossil fuel investments can be found in other stocks. Traditionally, for example, investors have often liked fossil fuels as a hedge against inflation. If oil prices are increasing, then the price of everything else is also going up, Levy said, so having fossil fuel stocks in your portfolio helps investors balance out their increasing costs.

However, this same effect can be achieved by carefully reallocating funds at the time of divestment, she said.

These financial realities, Cunningham said, are what separate the fossil fuel divestment movement from other divestment campaigns, like those against firearm manufacturers, companies that supported the apartheid regime in South African, or nuclear weapons.

“You can make great and really compelling moral arguments about guns, South Africa, and nuclear weapons, but all of those investments remain profitable,” Cunningham said. “Fossil fuel divestment is actually to the financial advantage.”