LEMs: What the devil use are they?

Vivek has global experience in engineering, IT, OT, sales, general management, teaching and consultancy. He has led the digitalization of projects globally, along with mega projects in energy and...

There's a famous story in the history of electricity innovation. Apparently, Michael Faraday who is largely credited with inventing the dynamo, around the early 1830s went into the prime minister of Great Britain's office with an amusing innovation. He twizzled an armature of wire around a magnet and it lit up a light bulb.

“Wonderful”, said the impressed PM Gladstone.” But what the devil use is it?” he asked.

Innovations have a habit of being created by engineers and then only later is use found for them, but until that point, they create a certain amount of puzzlement, similar to Gladstone’s.

One of those innovations that is arousing much interest is a market-based solution like LEM and many people are asking the modern equivalent of “What the devil use is it?”

In this short blog, we’ll answer that question and show how it can solve the problems of the electrical distribution grid while taking into consideration the customers’ and retailers’ benefits.

A brief summary of grid switching.

Traditionally a distribution management system (DMS) was used for SCADA operations and switching management. In other words, when a tree falls on a power line, the Distribution Utility gets told about it. It could be a phone call from a concerned bystander, or if it is being monitored at the control centre, an alert is generated, with the SCADA system.

The Distribution utility will then track the task until the line is restored to good working order. They will of course be measured on the performance by KPIs that specify response time and outage time.

This has been the standard approach to such incidents for the last half a century.

Then around 20 years ago, DMS got supplanted by Advanced DMS. This more modern system used computer modelling to simulate conditions on the network, producing a quicker, better and faster method for restoring power. ADMS has a rich set of apps including SCADA from DMS and Outage management and Network Applications.

But then came the advent of DERs and their associated complexity. Not only were there trees falling on the line to contend with, but there were also intermittent moments of a high generation that were difficult to predict or even monitor.

Clearly, a new system was required to manage this and it came with the title of DERMS, or distributed energy resource management system.

A DERMS would try to balance the behind the meter generations with load, it could do a few other things besides.

Not only could it do the balancing, but it could also aggregate an entire fleet of say rooftop solar, and see it as a VPP virtual power plant.

It could manage the individual units as assets.

It could do Demand Response. All of these things while working with the network apps or off ADMS, or by having its own network apps.

This was altogether a more sophisticated system.

But as energy systems evolved and privatisation became a recurrent theme in energy purchase, a market was required. This market would enable a generator to buy the cheapest available energy at the time, all the while operating within the constraints of the grid.

At the wholesale level, the market approach demonstrated real value. For example, in the state of California around 2014, the energy imbalance market was introduced. It has been calculated that this market approach saved the US taxpayer $2 billion by allowing efficient DER participation.

In the last few years, many commentators have sought to bring in a market layer in the Distribution space to procure so-called Flexibilities. That is the layer that guarantees steady frequency, voltage and other quality attributes of the power system.

Rather than having a man in a white coat physically pushing a button to switch off excess DER production that is causing voltage and frequency issues, and the automatic market-based system does something much more sophisticated.

By letting a market set a price within given constraints the system takes care of itself. This is what we mean by mode flex.

LEMs as the new way forward

The next layer of market interaction is called a LEM.

In this arrangement, a group of residents who own solar and perhaps wind or batteries, club together to exchange power, when and where they need it. These so-called Prosumers set their own prices, or rather their proxy machines do and trade with each other on a micro-transaction basis.

As the community scales up the network benefit via the market increases substantially, as does the ability of the LEM to interact supportively with the Flex and or the Grid.

In this market configuration, a double auction market structure is employed and there is a high degree of transparency and efficiency anticipated.

Early modelling suggests that LEMs can have a very stabilising effect on any grid they become part of while recognising a wide variety of consumer and retailer preferences.

LEMs can also help in flattening the so-called “duck curve”. 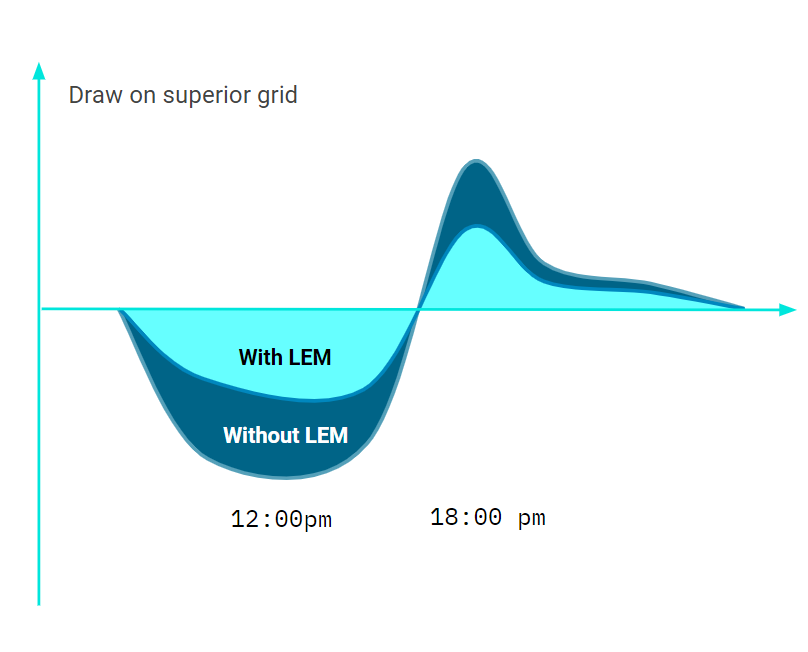 But these are early days. There are still some people not familiar with the possibilities of a LEM and they will no doubt be wondering like Gladstone, what the devil use it is.

But its ability to integrate Solar and other renewables into our grid seems promising.

Certainly, as LEM makes its presence felt in our energy systems, there’s no doubt we’ll be wanting to offer it favourable tax breaks as it makes a vital contribution to our world.

In this arrangement, a group of residents who own solar and perhaps wind or batteries, club together to exchange power, when and where they need it. These so-called Prosumers set their own prices, or rather their proxy machines do and trade with each other on a micro-transaction basis.

How does this come about in practicality? Is there an outside third party who would come in and 'recruit' them to do so and purchase a given system to make it possible? Or would it likely be spearheaded by one or two of the citizens who try to convince their neighbors?

It could be initiated by citizens or by a third party like a distribution utility.

If there is a need to send these electrons through distribution utility's poles and wires, the utility could become the application host. At places where there are retailers, they should also be involved. At some places, the strata owners can also host and recruit citizens.

This sounds like Micro GRIDs. Also the power issues can be pin pointed with all the remote smart meters that can notify the utility of outages or even just brown outs and other power issues. The many homes with solar AND battery storage should make it even easier to locate and fix any outages. V2G Elelctric Vehicles with battery storage to also help the GRID could make things better.

Yet with all these innovations  I don't see any utilities trying to work with customers. The Utilities only seem to be worried about profits. If they don't see the light soon they will soon be losing millions of customers as we all go Off GRID right in the city.

LEM share a concept that is very similar to a microgrid. They, however, are not the same. LEMs can work in a place where there is a microgrid to look ahead and optimise within a microgrid or among multiple microgrids.

Innovations like Microgrids, V2G, enhanced analytics from smart-meters, solar, batteries and LEMs are not only beneficial to the citizens but also to the distribution utilities and retailers. It's just a matter of time, and slight change of perspective.