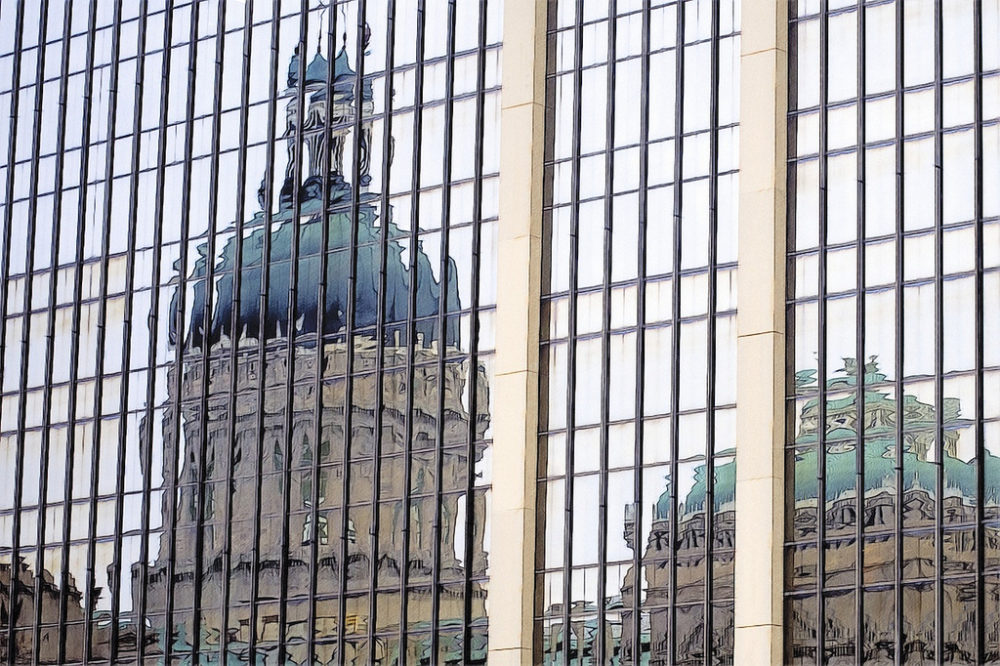 The Indiana Statehouse is reflected in the windows of an office building in downtown Indianapolis. Photo Credit: Greg Wagoner

The final report from a Republican-led state task force cautions against shifting to renewables too quickly and contradicts a previous, more-detailed analysis.

A new report from an Indiana legislative task force appears to lay the groundwork for justifying power-plant bailouts similar to those in Ohio and Illinois, despite assurances from state regulators and the region’s grid operator that coal plant closures do not pose a threat to grid reliability.

The Indiana Legislature’s Energy Policy Development Task Force issued a long-awaited report on Thursday, after two years of studies, meetings and testimony from about 100 experts. The report was meant to examine how the shift in energy sources will affect power reliability, resiliency and other factors.

“It really landed exactly where myself and others predicted,” said Kerwin Olson, executive director of Citizens Action Coalition, “that it would be vague and leave the door open for more evil coal activity in the next legislative session. That’s precisely what happened.”

The report’s findings and recommendations cover only three pages and raise concerns about electric grid reliability if the state shifts to renewable energy too quickly, with vague references to recent grid problems in California.

During the Republican-led task force’s final meeting, when members voted to adopt the report and pass it on to the full legislature, chair State Rep. Ed Soliday said legislation has already been drafted related to reliability.

“Reliability is the new code word for ‘how do we support coal?’” said Ben Inskeep, an Indianapolis resident and energy policy analyst with EQ Research who has closely followed the proceedings.

Stakeholders are particularly concerned about the task force’s third recommendation, which asks the legislature to “create a mechanism … to assure generation and transmission resource adequacy throughout Indiana.”

“It sounds a lot like what was done in Illinois and Ohio, in bailing out their uneconomic fleets,” Olson said, referring to supports for those states’ nuclear plants and Ohio’s coal plants.

Olson and other stakeholders noted that extensive input from regional transmission operator MISO and the Indiana Utility Regulatory Commission indicated that there are no major pending concerns about reliability, and that the existing regulatory process is effective in ensuring that utilities are able to provide energy to their customers.

The task force report says there is “apparent ambiguity” — an earlier draft said “confusion” — about which entities are responsible for ensuring reliability. In Olson’s view, expert testimony from MISO, the regulatory commission and the North American Electric Reliability Corporation (NERC) provided evidence of a “robust and rigorous” process to ensure reliability.

The Hoosier Environmental Council in its testimony asked legislators to put more faith in the regulatory commission and the utility planning process that it oversees. He lamented that the legislature has passed bills ending net metering and getting rid of the state’s energy efficiency standard, without adequately considering input from the regulatory commission.

“We didn’t want Indiana [legislators] to keep repeating its mistakes of enacting public policy that really is a much less effective approach than the [commission-driven] process,” said Hoosier Environmental Council Executive Director Jesse Kharbanda, adding that the commission is “driven by highly experienced, highly trained professionals who have the expertise to track reasonable data-driven policy that ultimately has the oversight of the legislature.”

“We came away from this Energy Task Force process believing the current structure is actually good — that MISO and NERC and the commission do a careful job of making sure Indiana remains reliable, rather than the bandwidth of the legislature being devoted to policies that we worry would slow the transition of coal to renewables,” he said.

The task force report found that renewable energy “is significantly less reliable and stable” than energy from other sources, and that “to compensate for the unreliability and instability of electricity generated from renewables, backup sources of generation are required, such as generation from fossil fuels, nuclear resources,” biomass, energy storage and more.

Stakeholders lamented this attitude toward renewables. One of the task force findings says that states such as California that “have simultaneously invested heavily in renewable resources before sufficient system redundancies were in place, and while neglecting to invest in transmission and distribution infrastructure, have experienced rolling brownouts and some of the highest electricity prices in the nation.”

Inskeep noted that there was no testimony from California regulators and little context provided for the finding.

“Particularly when the first draft came out, there was language blatantly anti-renewables,” Inskeep said. “The final report had some of those removed, but the tenor is still a skeptical view of the transition to renewable energy, specifically calling out California as a punching bag without actually any robust findings and discussions.”

The task force did call for standardizing regulations related to renewable energy siting, ordinances and tax structures — measures that could aid renewable development. And it said, “To keep Indiana competitive in attracting and retaining certain businesses, the state must encourage the deployment of renewable energy resources, while not compromising the reliability and affordability of electric utility service.”

The task force recommended that its process continue for another two years, with energy efficiency and storage, electric vehicles, demand response, and distributed energy resources (like rooftop solar) on the agenda.

Olson, Inskeep and others said these topics should have been studied by the task force in its first round, especially since net metering will essentially end in July 2022 under current policy, so the residential and commercial solar economy will suffer great harm even if the task force were to prioritize distributed solar in recommendations it would make in December 2022.

“Not only will net metering be prohibited, utilities will already have their successor tariffs in place by the time Task Force 2.0 has finished its work,” Olson said.

The legislature requested that the Indiana Utility Regulatory Commission examine fuel shifts and emerging technologies, which it did in conjunction with the State Utility Forecasting Group, Lawrence Berkeley National Laboratory, and Indiana University Public Policy Institute.

The resulting 338-page report was released in August and the task force held a meeting about it on Nov. 12. Stakeholders say the task force doesn’t appear to have taken the information in the report to heart.

A detailed analysis by Lawrence Berkeley National Laboratory, for example, shows resilience and reliability benefits from increased distributed energy sources — namely electric vehicle charging, battery storage and solar panels. The task force did not take note of such advantages, framing solar instead as a risk to reliability.

The Indiana Utility Regulatory Commission report details energy shifts in the region, noting that in MISO territory, coal generation dropped from 54% in 2006 to 32% in 2019, gas increased from 28% to 33% and wind last year represented 10% of generation.

“While the speed of change depends on the specific circumstances of a given company, the evolution is clear: greater diversification of generation portfolios, including greater incorporation of renewables and gas-fired generation facilities, and reduced reliance on coal-fired generation,” the report found.

The report also stressed that Indiana’s decisions will impact neighboring states: “Ultimately, Indiana is not an island. Electric resource decisions by Indiana utilities will affect the performance of the electric system throughout a multi-state region.”

The Hoosier Environmental Council also advised the task force to hold informational hearings on issues including energy storage, coal ash and best practices in other states, noting how Indiana compares to its neighbors on clean energy measures.

Indiana gets only 6% of its energy from renewables, compared to 37% in Iowa and Kansas, the council told the task force, and its energy efficiency investments represented only 0.65% of retail sales in 2018, about half the rate in Michigan and Minnesota. Unlike most other states, Indiana has no property assessed (also known as PACE) financing available for clean energy investments; net metering is ending and it has no mechanism for third-party ownership of distributed solar.

Kharbanda said that rather than trying to slow renewable deployment and support coal, the task force should be focusing on “how Indiana can be a national leader in energy efficiency, because we have such a strong manufacturing sector.”

“Jobs are needed especially in the context of this COVID recession — we’re getting hit hard economically,” he said. “We need to find new paths for creating jobs in the state, and clean energy is one of them.”