A surprise announcement on June 17 that a coal-fired power plant in Waukegan, Illinois, will close in 2022 was bittersweet for activists who'd been campaigning for years to close the plant. Credit: CheepShot / Creative Commons

In a surprise announcement last Thursday, NRG said it would close its Waukegan and Romeoville coal plants, but the community impacts are unclear as “just transition” provisions remain held up in state energy bill negotiations.

Illinois coal plants are closing even as fossil fuel objections stall energy bill again is an article from Energy News Network, a nonprofit news service covering the clean energy transition. If you would like to support us please make a donation.

Romeoville has already been replaced by Three Rivers Energy Center, a gas plant that will emit even more CO2 than the coal plant it replaced.

Apparently renewables advocates thought it might be replaced by wind turbines, solar panels, and hamster wheels.

Amazing how much you can get wrong in just a couple of sentences.

In fact, if you were going to try and pretend that a specific NG plant was replacing the coal from Will County, why wouldn't you pick the Jackson Generation project? That comes online in 2022 and is right down Route 53 from the Romeoville.

When the plant enters commercial service in 2022, it will be one of the world’s most fuel-efficient natural gas power plants, offering among the lowest carbon emissions of any combined-cycle plant. The project will produce 65 percent less carbon dioxide than a legacy coal-fired power plant. Because the plant is designed to enable more uptake of renewable power, the carbon reduction will be even greater when the plant is combined with renewables. The plant will be able to cycle quickly to meet fluctuating energy demands. It also will incorporate best available control technology to minimize emissions.

There is a lot of coal retiring in Illinois over the next few years and these two new NG plants will play a part - along with renewables - in replacing the lost coal generation from all these closures.

As for carbon emissions - dropping coal generation has meant a large decline in CO2 emissions from the electricity sector in Illinois. Eliminating the remaining coal will mean a further large drop in CO2 emissions with a corresponding small rise in NG emissions.

By 2030, the 34 MMT from coal emissions in chart below could easily near zero.

Apparently renewables advocates thought it might be replaced by wind turbines, solar panels, and hamster wheels.

Over the last five years the Romeoville coal plant has averaged about 0.9TWh of generation per year. Wind and solar in Illinois are up 0.9 TWh just in the first quarter of 2021 vs prior year. What do you know, the hamster wheels have "already replaced" Romeoville. 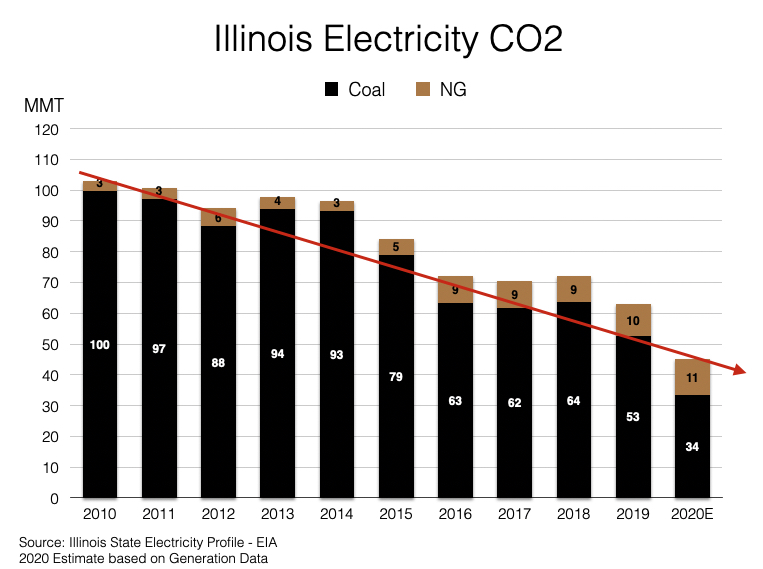 Joe, you're going to have to excuse me for ignoring your home-made, link-free graph and its cherry-picked "estimates" of carbon emissions, tailored to shore up your fascination with electricity from the wind, sun, and exercise bikes.

You claim the source of your graph is "EIA". Would that be  "Enhanced Ideology Associates," or "Earned Income Advocacy"? Because you may be disappointed to learn the U.S. Energy Information Administration disagrees with your contention renewables have anything to do with decreased coal consumption. They seem to think it's a fossil-fuel switcheroo, to the chagrin of Californians who might be tempted to believe the sun shines every day in Illinois (it doesn't, it's my home state).

Anyway, here's the bad news,from the only EIA that matters:

Maybe Illinoisans can run their wind turbines backwards and blow all the clouds away, so their solar panels would work better? Just an idea.

Surprised you aren't familiar with  the source Bob... I would have thought you were a fairly regular user of EIA State data. I guess not. Here are links...

Go to Full Data tables and look at Table 7 - Emissions.

The only "estimate" in my chart is for emissions in 2020 which I derived by using 2020 coal and NG generation data. The emissions numbers for other years come directly from the "only EIA that really matters".

Would be happy to see if you come up with different estimate for 2020. The official numbers will come out in December. How far off do you think I will be? 1-2 MMT?

to the chagrin of Californians who might be tempted to believe the sun shines every day in Illinois (it doesn't, it's my home state).

No advantage for you there Bob. I grew up in Chicago - North Ave and Cicero. Went to school at U of I in Champaign.  So, I have middle part of state covered as well.