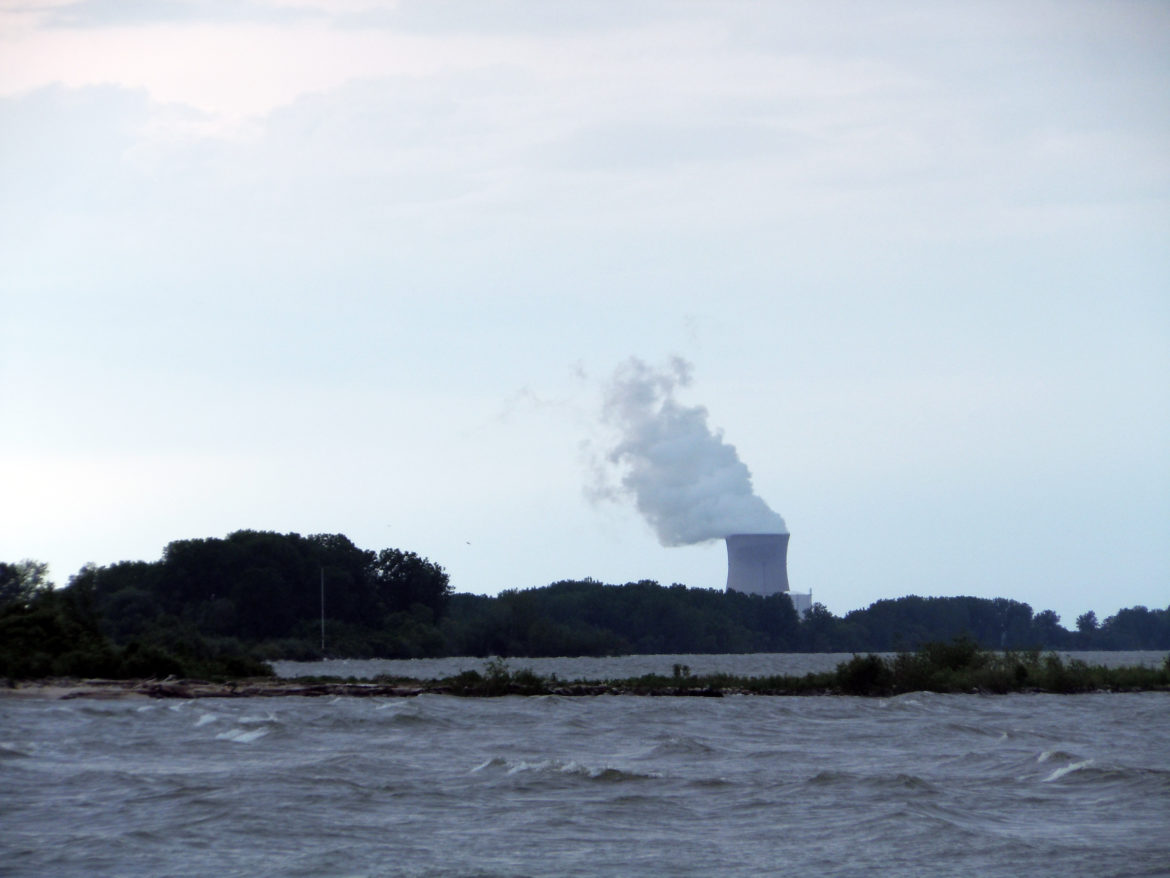 The Davis-Besse power plant in Oak Harbor, Ohio, as viewed from the fishing pier at nearby Camp Perry.

Using nuclear power to produce hydrogen likely would not be enough to help nuclear plants compete with renewables.

Midwest nuclear power generators are exploring the potential of producing hydrogen on site as a way to reduce costs and create new revenue — a move that could also boost the region’s growing fuel cell industry.

Department of Energy grants will let Energy Harbor (formerly FirstEnergy Solutions) and Exelon use some of the electricity at one of their respective nuclear plants to power the separation of water into hydrogen and oxygen by hydrolysis. The hydrogen can then be used in various applications, including fuel cells, which produce electricity as they combine the hydrogen with oxygen to make water.

Energy Harbor’s project at the Davis-Besse nuclear plant in Oak Harbor, Ohio, will cost approximately $10 million, according to mechanical engineer Alan Scheanwald there. Other collaborators on the company’s project with Idaho National Laboratory include Xcel Energy and Arizona Public Service, he said. Each also plans to set up pilot projects at one of their respective power plants.

Scheanwald was initially scheduled to speak about the Davis-Besse project at the Ohio Fuel Cell Coalition’s 2020 symposium in late April. Due to the coronavirus pandemic, the event is currently rescheduled for October.

Exelon received a similar grant to set up a hydrogen-from-nuclear project at one of its nuclear plants, said spokesperson Lacey Dean. The uses for that project’s output will differ somewhat from the Davis-Besse project.

“Our goal is to provide an economic supply of carbon-free hydrogen for internal nuclear site use,” Dean said. Because of its favorable heat transfer properties, the gas helps cool turbine generators as they run, she explained. Hydrogen gas also helps prevent material degradation of some nuclear reactor components, she noted.

Why hydrogen from nuclear?

Technology for the process of separating hydrogen from water, called electrolysis, had its early beginnings in the 19th century. And modern technology using a proton exchange membrane, or PEM, for the job dates back to the 1960s.

However, electrolysis has generally been more expensive than making hydrogen fuel from natural gas. The net greenhouse gas emissions from that process are still less per unit of electricity produced from the hydrogen fuel than direct burning of the natural gas would yield. But reforming the natural gas still releases some carbon dioxide.

Making hydrogen from nuclear power offers the potential to avoid the greenhouse gas emissions, in much the same way as producing it from renewable energy, such as solar or wind power. In contrast, running electrolysis with power from the general grid would use electricity from many different sources. For Ohio and the PJM grid region overall, the majority of that comes from fossil fuels.

If the pilot projects succeed and are eventually scaled up, they could also improve the bottom line for nuclear plants that have become less and less competitive.

“I see this as something that allows us to continue operating that plant,” said Scheanwald at Energy Harbor’s Davis-Besse plant. “It helps promote a product that we already make, and we take it to the next level and make another product with it.”

In Davis-Besse’s case, that next level could let the plant make more money from the small share of electricity used to make the fuel than it might otherwise get from feeding it into the grid at low-demand times. This would be minimal for the pilot project, which would use far less than half a percent of the plant’s output, Scheanwald said.

Nonetheless, “we’ve had a lot of interest so far” from industries in and around Toledo, Scheanwald said. A future scaled-up project could eventually use a larger share of the plant’s output.

Most nuclear power plants are relatively inflexible in their output, meaning they can’t easily ramp up or down in response to shifts in demand. For plants like Davis-Besse, the preferred way to operate is to generate roughly the same output around the clock. At various times, however, the market price might not cover all of a plant’s costs.

“We are not really challenged with having to throttle our output,” Scheanwald said. “We are challenged more with the price of our electric output on the grid.”

So, in theory, the marginal cost to Davis-Besse for the nuclear power to make the hydrogen could be very low, according to Pat Valente, executive director of the Ohio Fuel Cell Coalition. If the project was eventually scaled up, it could eventually make zero-emission production of hydrogen fuel “considerably cheaper than it is on the market today,” Valente said.

At the same time, revenue from selling that fuel could provide a new revenue stream for the nuclear plant. In effect, using some of the excess electricity to make hydrogen fuel could work as a form of energy storage. But rather than functioning to smooth out intermittent production of electricity, it would produce more income and value when the hydrogen is purchased and then used for fuel cell applications.

Similarly, making on-site hydrogen would cut the expense of buying the gas for use in nuclear plant operations, such as cooling and protection of components.

“If successful, we could reduce in-house hydrogen costs right away,” Exelon’s Dean said. “Moving forward, we could explore the potential of selling clean hydrogen in the commercial market, giving our plants a new revenue stream.”

Although electrolysis technology is well established, the companies need to see how it works in their facilities and whether it could be managed at scale.

“I think the challenge in what we’re looking to prove in the pilot project is the integration of this … with our day-to-day nuclear operations,” Scheanwald said. If it proves successful, Energy Harbor might eventually build a large-scale hydrogen processing plant nearby, he noted. At this point, there are no commitments for that, however.

While such revenue streams would be helpful, it’s dubious whether scaling up the projects could in the long run make up for the competitive disadvantage that various nuclear plants face from the growing number of natural gas plants and falling costs of renewable energy. Critics have also noted that renewable energy technologies can be more efficient for reducing greenhouse gas emissions.

Although Energy Harbor will still collect the subsidies when the charges kick in next year, the company increased its share buyback authorization from $500 million to $800 million on May 8. Besides bumping up the stock price, the move could provide a quick reward for investors who bet on House Bill 6’s passage coming through while FirstEnergy Solutions went through bankruptcy proceedings. Those proceedings wrapped up earlier this year.

The two-year project at Davis-Besse should start running this coming winter, although it’s not yet clear whether the pandemic or other factors will affect the timetable. Exelon still needs to select the plant for its project.

"However, electrolysis has generally been more expensive than making hydrogen fuel from natural gas. The net greenhouse gas emissions from that process are still less per unit of electricity produced from the hydrogen fuel than direct burning of the natural gas would yield."

Burning natural gas to generate electricity if far more efficient than converting it to hydrogen first, then oxidizing the hydrogen in a PEM fuel cell: