Is green hydrogen a fuel of the future?

In my role at Barclay Pearce Capital, I advise companies on capital raising, deal structure, company valuation, corporate governance, and the IPO process. Through my role, I have developed a...

“The question isn’t whether or not green hydrogen will become the next global energy form…it’s which company has the resilience to take the risk and truly test green hydrogen at a global, industrial scale...and Australia, with characteristic luck, is sitting on everything it needs to be the world leader”

Hydrogen is the most abundant element in the universe. Unfortunately, it does not occur naturally on Earth and must be extracted from other elements. Traditional methods have been steam-reforming from natural gas producing ‘Grey Hydrogen’ or coal producing ‘brown hydrogen’. When these methods are used but the emissions are carbon-captured the resulting product is termed ‘blue hydrogen’. It is only through water electrolysis, where a renewable energy source, such as wind, solar, or hydro, runs through water splitting the atoms into hydrogen and oxygen that ‘green hydrogen’ is produced. 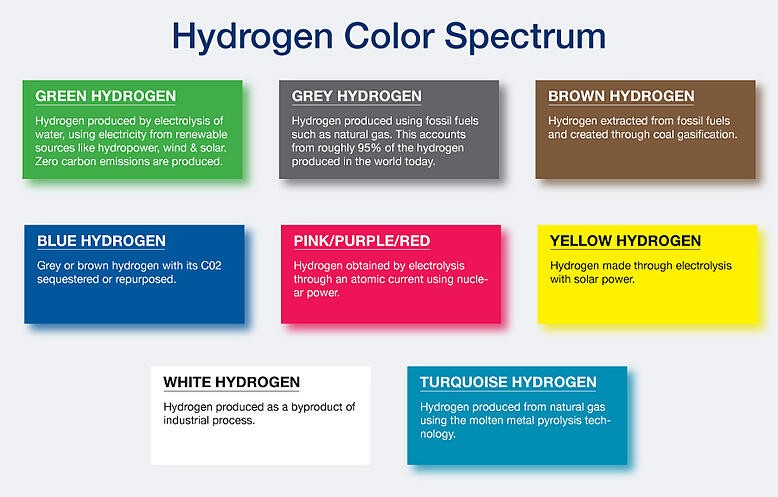 The best way to look at green hydrogen is as energy storage and therefore is essentially in competition with battery technology; that is why Elon Musk has called hydrogen fuel cell technology “stupid” as it is a green competitor to Tesla’s battery electric vehicles. However, I believe the technologies are complementary and are necessary to work in tandem to achieve an emission-free future. For example, battery technology is more efficient and the better option for power generation on timeframes up to four hours due to the efficiency of charging from the source. The drawbacks of battery tech are that it takes long periods to recharge, and capacity is constrained with energy unutilised when battery capacity has been reached.

In contrast, hydrogen storage capacity is exponentially higher and cheaper, and hydrogen cars (Fuel Cell Electric Vehicles - FCEVs) do not require long periods to recharge. The downside is that the efficiency of creating hydrogen is materially lower than batteries. What this may mean for the future is that homes and consumer vehicles will largely use battery tech but commercial vehicles such as taxi’s, trucking, and aeronautics will utilise FCEVs. Moreover, energy intensive industries such as steel manufacturing will also use hydrogen as a backup to a renewable energy grid.

There is a high probability that Australia will become a global giant in the export of green hydrogen to the world, especially Asia. This is underpinned by Australia’s vast availability of land, world-class renewable energy resources (plenty of sun, wind, and water), proximity to potential large importers in Asia, and existing port infrastructure. It is important to note that Australia already ranks amongst the global leaders in terms of number of projects advancing toward development and pilot plants already underway.

There have been several studies into the potential size of the green hydrogen economy for Australia with an Acil Allen Consulting paper commissioned by the Australian Renewable Energy Agency (ARENA) calculating 3 million tpa at a value of A$10 billion being exported. This comes as no surprise, given that Australia is the world’s largest exporter of LNG, shipping 80m tpa worth A$50 billion. It is anticipated that green hydrogen can replace this fossil fuel export one day which is why the Federal Government has created a National Hydrogen Strategy and a A$300 million Advancing Hydrogen Fund.

Is This All Sizzle and No Steak?

The chatter around green hydrogen and its potential is gaining momentum. This is especially evident in the market where company stock prices hit the stratosphere at the mention of green hydrogen. A prime example of this is Province Resources (ASX:PRL) which upon announcing acquisition of a green hydrogen project sent the share price up over 450% from $0.026 to $0.145. The project is in an exceptionally early stage with feasibility studies only starting in March 2021.

I believe the hydrogen hype is justified but there is a severe lack of credible and commercial projects for retail investors to back. With time, more realistic/advanced projects will progress to final investment decision (FID) which will enable public listing, if they require external funding.

For example, Infinite Blue Energy (IBE) is an unlisted public company with aspirations to be a global leader in green hydrogen production globally. Their flagship project, Arrowsmith Stage 1, is A$500 million project on track for first gas in 2025 with a gradual ramp up in production to 25 tonnes per day (tpd).

Additionally, many large public commodity companies are exploring investments into green hydrogen production to lower their carbon footprint while also providing opportunities to remain relevant in a carbon-neutral future.

Fortescue Metals Group (ASX: FMG) is a high-profile example with the iron ore producer establishing Fortescue Future Industries and funding it with 10% of FMG’s annual profits. The subsidiary’s focus will be on green hydrogen production powering mine operations and smelting facilities to produce ‘Green Steel’. The problem here lies with ESG-focused investors not wanting exposure to certain industries which may result in pure-plays trading at a green premium.

Hydrogen - the Fuel of the Future

I believe green hydrogen will play a vital role in the energy mix of the future. To achieve this, trillions will need to be invested into infrastructure to accommodate the demand. This will see green hydrogen companies start to publicly trade in public financial markets around the world. Importantly, we are transitioning to a more ESG focused world with investors looking to support renewable energy companies that will provide a sustainable future.

There is a lot of hype in the market for green energy, which inevitably results in malinvestment in uneconomical projects and hyperinflated valuations. This is a recipe for stock market losses if an investor gets caught up in the green hydrogen hype. Always remember to do your due diligence before any investment and do not assume that all green hydrogen projects are created equal.

Jack,  I agree with Musk. Hydrogen is very inefficient and expensive. The gas is hard to store. It can leak very easily and can burn and explode.

I agree on the inefficient and expensive aspects but with continued R&D investment the cost will come down significantly. Logistics for the gas is the hardest problem to solve but I'm also confident of it being solved based on the history of natural gas. On a small scale though, compressed hydrogen is easy to store and the fire risk is actually significantly lower than fossil fuels and batteries. There are plenty of examples of batteries catching fire.