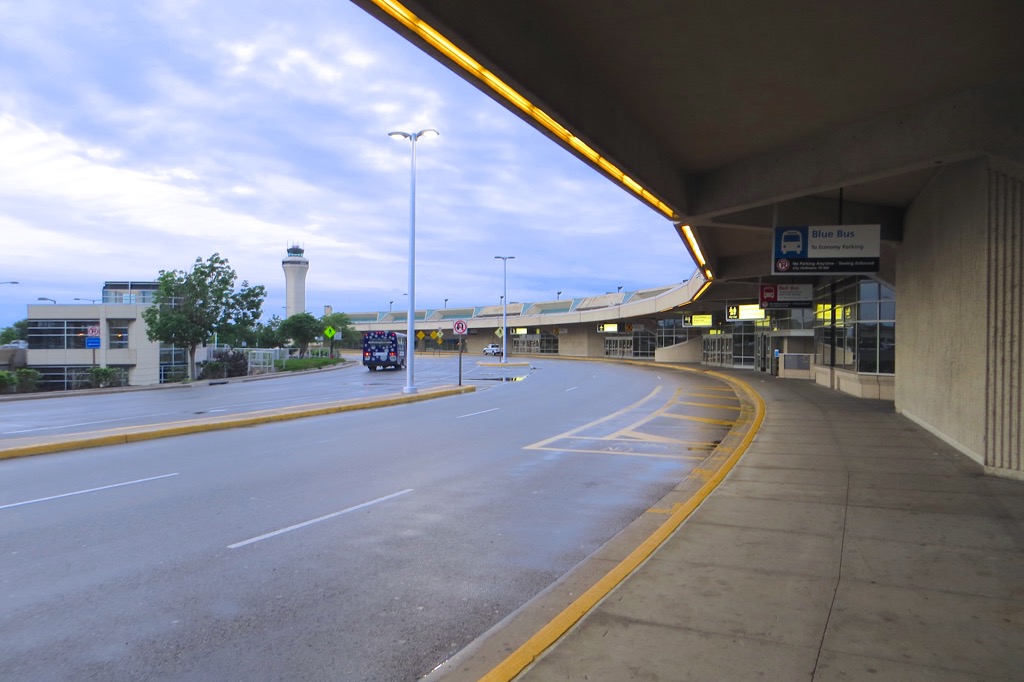 The utility says it will seek a new location for its first community solar project, which already has commitments for more than 90% of its proposed capacity.

Kansas City utility Evergy has quietly abandoned plans for a large community solar project at the city’s new airport after an engineering study concluded the designs would cause glare problems for air traffic controllers.

Evergy spokesperson Gina Penzig confirmed to the Energy News Network that the decision was made in mid-November and that the utility is seeking a new site elsewhere for the long-delayed project.

The utility and the city’s aviation department had intended to put the 5-megawatt project atop a six-story parking garage that will be part of a new airport now under construction. They were attracted to the airport and the garage in particular because of their high visibility to people arriving in town.

The Federal Aviation Administration requires developers of airport solar arrays to conduct a glare study to determine whether reflections from the panels are likely to interfere with the vision of pilots or air traffic controllers. The agency won’t necessarily stop a project, but it might require costly modifications to resolve issues.

In this case, the parking structure sits between the air traffic control tower and part of the runways, putting the solar array partially within controllers’ visual sightline, explained Dave Long, Kansas City’s deputy director of aviation.

The project’s engineers studied another site about 1.4 miles from the control tower, near the Park Air Express airport parking facility alongside Interstate 29 and found a glare problem with that location as well.

Long’s reaction: “You gotta be kidding. I never thought the panels on the parking garage would be a problem, but it is, and it was. The second location shocked me even more.”

Solar arrays are becoming more common features at airports across the country and are producing energy in Denver, Indianapolis, Minneapolis-St. Paul, Tucson, Honolulu, Chattanooga, and Tampa, to name a few.

The projects haven’t always been problem-free. Alicen Kandt and Rachel Romero of the National Renewable Energy Laboratory wrote a paper published in 2014 about siting solar arrays at airports. They chronicled the experience at the Manchester-Boston Regional Airport in New Hampshire. The airport in 2012 installed a 530-kilowatt system on the roof of a six-story parking garage. Within weeks, air traffic controllers reported problems with glare for about 45 minutes each morning as they looked east over the parking garage. Consultants advised the airport to reorient the panels 90 degrees so they would face east rather than south.

That resolved the glare problem, Kandt said, although the solution came with a small cost. It was estimated that the eastern orientation would reduce power production by about 10%.

At Kansas City’s airport, the locations without glare issues were farther from Evergy’s nearest substation, Penzig said, meaning that the cost to move the power from the solar array to the grid would be unacceptably high. The airport also eliminated some locations where it wasn’t willing to commit to a 30-year lease.

“After two years of looking, we were just not going to find the right place,” Evergy’s Penzig said.

“It’s a great idea, and solar energy is so important,” he said. “We have to convince the FAA it’s still a viable idea.”

The community solar project — Evergy’s first in the Kansas City area — has been slow to come together. Two years ago, Evergy began inviting customers to pay an extra fee to receive some of their power from a community solar array. The company said it would begin construction when customers committed to purchasing at least 90% of anticipated production. Evergy says customers have committed to taking 92%, yet the waiting will continue.

“We knew the airport was going to be complicated because of having multiple regulators and different entities involved,” Penzig said. “We are starting to examine other sites. We hope [they] will be more straightforward.”

Both Evergy and the Kansas City government recently have made formal commitments to increase the use of renewable energy and to reduce greenhouse gas emissions. Evergy has pledged to cut emissions of greenhouse gases by 80% by 2050 against a 2005 baseline, and indicated it might ratchet up its goal to an 85% reduction by 2030. The city aims to reduce emissions from government operations by 80% from the 2000 level by 2050.

The news of the airport project’s demise comes as a disappointment to clean energy advocates who have hoped for more action from the city and utility.

“We’ve long awaited this project, but now we’re back to uncertainty,” said William Davies, a conservation organizer for the Sierra Club in Missouri. “We feel that any technical reason this is stalled can be overcome, and the city and utility should work to overcome it.

“We need to see meaningful action by our utilities and by our cities.”