If carbon dioxide is the problem, nuclear power must be part of the solution. Georgia Power Company is to be commended for leading our nation toward a balanced energy portfolio.

Vogtle has been criticized for budget/timeline issues-- can that be turned into a positive in terms of lessons learned for future potential nuclear plants?

It will be interesting to see what the final cost to produce energy will be. Unless there is some form of a carbon tax, I suspect it will be relatively high compared to gas. I do hope that the lessons learned are leveraged to expand nuclear in the coming decades. However, I believe the focus in nuclear has turned to SMRs.

Here's my take on the lessons learned...

First of all let's look at the last decade of electricity generation in GA. Georgia has done a great job of reducing coal usage primarily thru increased NG with a small amount of solar added over the last few years. 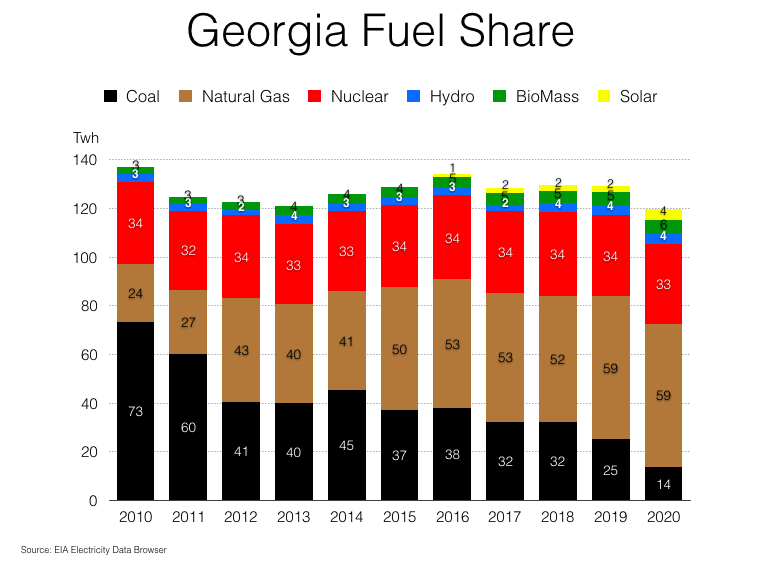 The two new reactors will add about 20 TWh more of nuclear generation. This should  enable Georgia to close its remaining coal. This is definitely a lesson learned - even if it was expensive. Back in 2013 when construction started on these reactors nuclear was the best choice so I don't have any problem with the cost of this project.

However, going forward solar will be the choice for Georgia and will replace most of the NG generation. Although total solar generation in Georgia was only 4TWh in 2020 - soon it will easily match/surpass the 20 TWh that the two new reactors will provide. This will be done at a fraction of the cost of Vogtle and with almost no risk to Georgia Power.

So the major lesson learned will be - Solar is cheaper and less risky when developing future projects to further lower CO2 in Georgia.

Here is an example of some of the new solar coming in GA over next few years.

Georgia energy regulators have authorized Georgia Power Co. to move forward with plans to buy 970 megawatts of solar power from five other utilities.

The company plans to have about 5,400 megawatts of renewable energy resources in its portfolio by the end of 2025, accounting for about 22% of its power generation mix.

"However, going forward solar will be the choice for Georgia and will replace most of the NG generation."

You continue to repeat this mantra, Joe, but it will never happen until the sun shines at night. As far as I know, that profound astronomical event isn't in the cards, nor has the Energizer Bunny invented an affordable battery that can power an electrical grid.

When there's a solar / battery configuration that can produce 2.3 gigawatts of clean electricity for 18 months nonstop, and do it for less than $30 billion, then we can consider solar a dark horse contender. Until then, DOE doesn't share your enthusiasm for new solar - in Georgia, or anywhere else.

"The United States is all-in on new nuclear.

Two of the most advanced commercial reactors in the world are under construction in Waynesboro, Georgia — marking a new era for the industry.

The successful completion of Vogtle Units 3 and 4 will set the tone for what could be a nuclear resurgence in the United States.

America’s newest reactors will not only provide clean and reliable power to millions of homes and businesses in the Southeast, but are also helping to rebuild our nation’s nuclear workforce and future supply chain."

But you don't seem to like my statement that solar will be the choice for replacing the remaining 60 TWh of NG generation in GA. You said:

You continue to repeat this mantra, Joe, but it will never happen until the sun shines at night. As far as I know, that profound astronomical event isn't in the cards, nor has the Energizer Bunny invented an affordable battery that can power an electrical grid.

Let's do some napkin math. First, let's assume conservatively that solar can only replace 20TWh of remaining NG because it doesn't "shine at night". Of course, in the real world NG in GA spikes during the day and drops drastically at night but we'll ignore that.

So that leaves us with 40 TWh of NG that needs to be stored in  "Energizer bunnies".  How much would that be on average - per day?

That's a lot of "energizer bunnies" - how much would that cost? Using Tesla's current pricing of $278,000/MWh we would get

In other words all that storage would cost a little over $30B at today's prices. Huh? That's kinda weird - how much did those two reactors at Vogtle cost?

One more point I wanted to emphasize on the above... this is not "something in the future".  This is already happening.

Unlike nuclear, thats the way it works for solar/storage  Projects get designed and built - every year. There is no reason this can't scale in Georgia.

Here are two small examples of solar/storage in Georgia.

Wärtsilä has been awarded a contract to supply the ‘engineered equipment delivery’ (EEQ) of a 40 MW/80 MWh DC-coupled solar plus storage system to the Hickory Park Solar project in Georgia, USA. The owner of the project is RWE Renewables. The Wärtsilä system will enable a subsidiary of RWE Renewables, Hickory Park Solar, to sell nearly 200 MW of generation from the solar PV panels to Georgia Power Company.

The storage component consists of GridSolv Quantum, Wärtsilä’s next-generation energy storage system. The project is currently designed with CATL batteries. The co-located energy storage system will be DC-coupled with the solar array, allowing, says Wärtsilä, a number of benefits, such as improved system efficiency, lower balance of plant costs, and clipped solar recapture. The stored energy can be introduced into the grid at the appropriate time, maximising the value of the system’s generation.

Delivery of the Wärtsilä equipment is scheduled for September 2021, and the plant is expected to commence commercial operations in November.

RWE Renewables,a subsidiary of Germany-based RWE Group, has entered into a 30-year PPA with Georgia Power for RWE’s Broken Spoke Solar project, a 195.5-MW solar facility with a 40-MW, 2-hour battery. The project will begin supplying power in late 2021.

So we have 160 MWh out of the 110,000 MWh estimate from above calculation. Say goodbye to one small 50MW NG peaked running for 3 hours/day. Time to move on to next projects.

Bob and Joe, thanks for the valuable discussion on this important topic. As I said at the top, nuclear needs to play a significant role in the decarbonization of the energy supply. The reality is that large nuclear plants carry enormous risks for the developer, who will find it difficult to finance. On the other end of the spectrum, batteries and short-term storage will continue to get cheaper. Unfortunately, the calculations above are not risk-adjusted. To get through January on solar and batteries even in the South is a challenging proposition. Small modular reactors represent a solution to both problems and, in my opinion, will grow significantly over the next 20 years.