Five Facts about Utility Plans to Power the Next Decade State-level clean and renewable portfolio standards (RPS) along with decreasing costs for solar, wind, and battery storage are driving the nation’s energy markets towards increasing levels of renewable energy and accelerating timelines for retiring coal-fired generation units. Twelve states, the District of Columbia, and Puerto Rico have established policies aiming to achieve 100% clean or renewable energy by 2050 or sooner. Notably, Arizona is on the verge of adopting new Energy Rules requiring electric providers to achieve a 100% carbon emission reduction target by 2050, along with other requirements for demand-side management (DSM) and energy storage. Accordingly, some utilities are developing IRPs that reflect aggressive renewable energy resource deployment to replace coal-fired generation. Dominion Virginia, for example, is leading utilities in the planned deployment of solar photovoltaic (PV) resources over the next decade with 12,320 MWac of planned solar PV. Similarly, Pacific Gas & Electric is leading utilities in planned deployment of energy storage over the next decade with 4,473 MWac of planned energy storage, according to IRP as a Data Service™. Perhaps unsurprisingly, utilities operating in states with less ambitious or no RPS policy in place, are developing IRPs that often prioritize significant investments in natural gas resource additions. This is most apparent in the Southeast region of the United States, where Virginia is the only state with a 100% renewable portfolio standard. Utilities operating in this region have planned to deploy more than 15,000 MWac of natural gas resources through 2030. 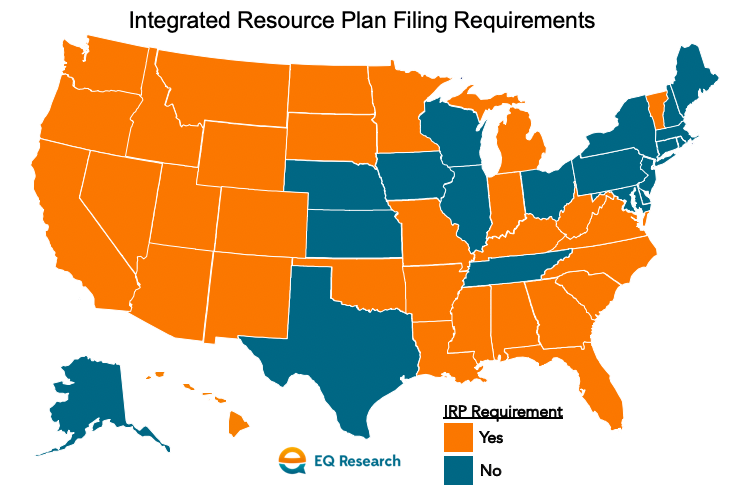 The above map reflects where IRP requirements are found across the United States. For the purposes of the Figure above, we include states where utilities file long-term planning documents that are primarily informational in nature (e.g., Florida) rather than subject to the types of contested case planning proceedings that exist in other states. New Hampshire is not shown here as a state with an IRP requirement because even though distribution utilities are required to file IRPs, they do not own generation resources. 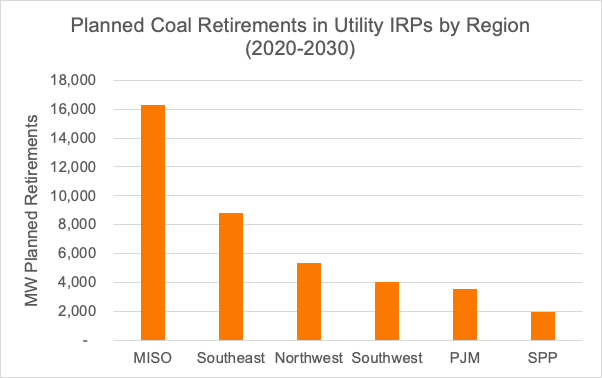 Market regions ERCOT, NYISO, ISO-NE, and CAISO are not included in this graphic due to either a lack of available data or a lack of planned coal retirements. PJM is partially reflected based on data available from utility planning, which does not include market-driven additions.

Notably, coal-fired power plants are increasingly facing retirement prior to the end of their planned useful life. During the period of 2020-2030, utilities operating in the MISO region will retire the most coal-fired generation by far, with IRPs indicating 16,321 MWac will be retired. To compare, the region with the next most planned coal-fired generation retirements is the Southeast, where utility IRPs indicate they will retire 8,796 MWac by 2030. 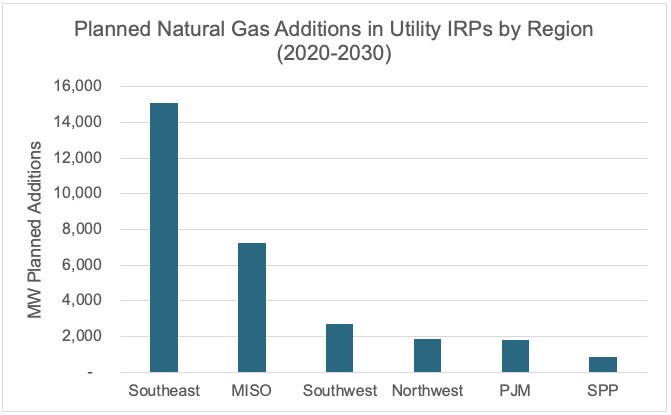 Market regions ERCOT, NYISO, ISO-NE, and CAISO are not included in this graphic due to either a lack of available data or a lack of planned coal retirements. PJM is partially reflected based on data available from utility planning, which does not include market-driven additions.

As noted above, the lack of state-level policies supporting renewable energy is evident within the IRPs of utilities operating in the Southeast. While utilities in this region plan to retire more than 8,796 MWac of coal-fired generation from 2020-2030, they also plan to deploy almost twice that amount in natural gas resources (15,082 MWac) during the same period.

Finally, as the cost of renewable energy resources continues to decrease and states continue to implement ambitious RPS policies, electric providers’ planned investments in renewable energy have markedly increased from prior years. Solar PV resources and energy storage, in particular, have become significant planned investments for electric providers across the United States. The above tables depict the top five electric providers for planned solar PV deployments and energy storage by 2030 as determined by an analysis of the most recent IRP as a Data Service™ report.

Credit to Ben Inskeep and Vanessa Luthringer from EQ Research for this report.

As noted above, the lack of state-level policies supporting renewable energy is evident within the IRPs of utilities operating in the Southeast.

Is this because of different political alignment, more powerful influence of the legacy companies who rely on fossil fuels, or is there something else at play?

Thanks for sharing, Miriam!

I think the reason for this, Matt, is that the Southeast is a marketplace comprised of regulated utility monopolies with very strong lobbying power.

Miriam, It's great to the the FACTS about what the utilities have planned. You and your researchers did a great job of uncovering this information.

It is excellent they are planning more storage. That has been the Holy Grale of the GRID for 100 years.

The planned growth of NG resources seems very short sighted. They must know that the US hit peak NG in 2004. The only supply we have now is from Fracking and that runs out very quickly. That will come back to cost them very fast.