If Europe wants to achieve its goal toward an economy with lower carbon emissions, a fundamental change in the transport sector is required. Nowadays, this sector is responsible for 25% of the total greenhouse gases across Europe.

The Electric Vehicles are becoming more and more attractive due to unending technology improvements, in terms of batteries, especially when compared to the traditional fuel engine vehicles. Nowadays, the electrical vehicle is often used worldwide as urban transport, ride sharing, goods delivery, etc. Furthermore, almost every EV producer is in a process of advanced industrialization (if not already selling it) of at least one or more hybrid/electrical vehicles. “Plug-in” version cars, besides allowing home recharge possibility giving more independency for the final consumer (and EV owner), will also create new infrastructures of batteries recharge.

Increase in the demand for electricity

The growth in the use of electric vehicles will lead to an extra demand in the EU: the total electricity consumption in Europe of these vehicles will increase from 0.03% in 2014 to 9.5% in the year 2050.

According to the European Environment Agency (EEA) it estimated that in 2050 80% of the vehicles will be electric. To meet this goal, large amounts of extra of energy is required. In addition, this energy must be integrated in the infrastructure of the network across Europe. The question will be, therefore, how much electricity is needed, and what kind will be used to cover this additional demand for electricity and how load peaks are managed. 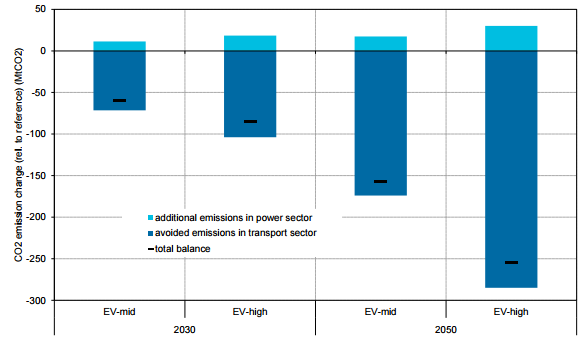 Until 2030, the demand of energy from the electrical vehicles will be limited and not influence in the electric system significantly. But, from 2030 awards, with the market shares going up, because of electric vehicles production, electricity demand will have a more significant impact on electrical systems in Europe.

To achieve that by 2050 80% of the vehicles are electric, a proportion between 3% and 25% of the total electricity demand will be required in EU-28, depending on the number of electric vehicles deployed in each country. On average, for the EU-28, the proportion of the total demand for electricity in 2050 will be 9.5%. This means that, an additional electrical capacity of 150 GW will be necessary for charging electric cars. This would be equivalent to 18 large nuclear stations or combined cycles and would represent 15% of the current electric system throughout the EU.

Please, go to our website to read the full story (check the link below!)

Electric Vehicles and the Energy Sector

If Europe wants to achieve its goal toward an economy with lower carbon emissions, a fundamental change in the transport sector is required. Nowadays, this sector is responsible for 25% of the total greenhouse gases across Europe. The Electric Vehicles ar...

Very interesting when a Congress person has real industry experience.  PURPA has been a great piece of legislation to allow independent...

The incentives and the various stakeholders are getting more complex, more mixed up than they were ever meant to be when the current utility...

It's unconscionable that the utility would even try this. It's a shame that it took the state's highest court to shoot it down.

Gary commented on ...
Why should NM store nation's nuclear waste?

I am not sure where this article gets its data, but there are several claims that are not supported by footnotes or other references.  I would...