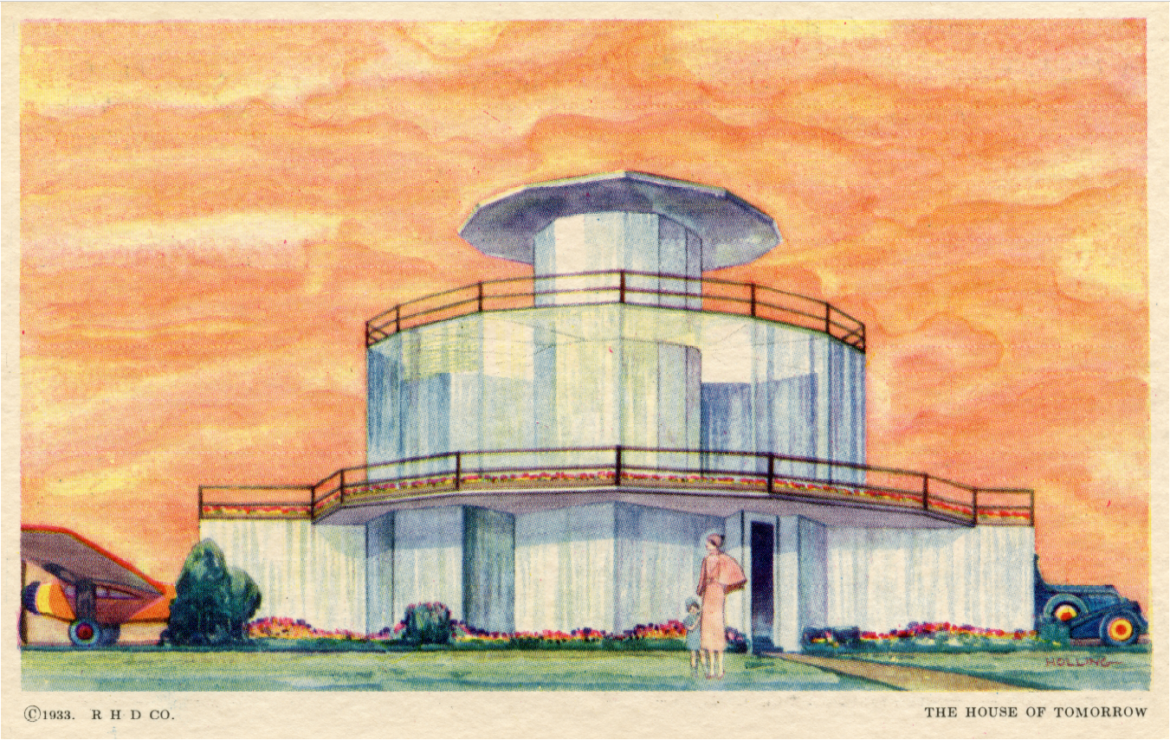 A 1933 rendering of the House of Tomorrow shows the 12-sided glass home, complete with a hangar to house its hypothetical futuristic inhabitants' personal aircraft.

The House of Tomorrow, featured as part of the 1933 World’s Fair, presents unique challenges to those tasked with restoring it.

While it currently stands in disrepair on the Indiana lakeshore, the House of Tomorrow was once a prototype for cutting-edge energy technology.

And as plans are proposed to restore the structure, which was an attraction at the 1933 World’s Fair in Chicago, experts say it can still offer lessons for building design today.

The House of Tomorrow, designed by architect George Fred Keck, was perhaps the most reflective of the exhibition’s motto: “A Century of Progress.” Its glass curtain wall predated both Philip Johnson’s Glass House (1949) and Mies van der Rohe’s Farnsworth House (1951) by more than 15 years.

The house was also designed to take advantage of passive solar energy, and featured a then-revolutionary heating, ventilating and air conditioning system, centered within the core of the iconic spiral staircase that leads from the ground level to the main living spaces on the second floor of the house. It was one of the first forced-air HVAC systems in operation, according to Todd Zeiger, director of the Northern Regional Office for Indiana Landmarks.

“[Keck] went on later to really build a career and a reputation for working with solar design,” Zeiger said. “He employed what he learned from the House of Tomorrow for solar design. He really made a name for himself in his use of solar with his properties” — not solar energy as in the panels that produce electricity today, Zeiger added, “but in the sense of designing homes that could take advantage of that heat gain, especially in this northern climate.”

An article about the House of Tomorrow from the June 1933 volume of Popular Mechanics breathlessly described motion-sensitive doors that opened upon approach or by spoken command, remote-controlled radio throughout the house, and automatically controlled electric kitchen appliances, including an “iceless” refrigerator and a dishwasher. The house also included an airplane hangar, at a time when futurists expected a large number of families would own personal aircraft.

“This house was very futuristic at the time it was built,” said Helen Kessler of HJ Kessler Associates, which is providing sustainability consulting for the restoration. “I think it had a big influence on the Kecks and how they designed future homes. The Kecks really were known for designing homes to take into account things like energy and the environment, solar, and they were pioneers in that area.” 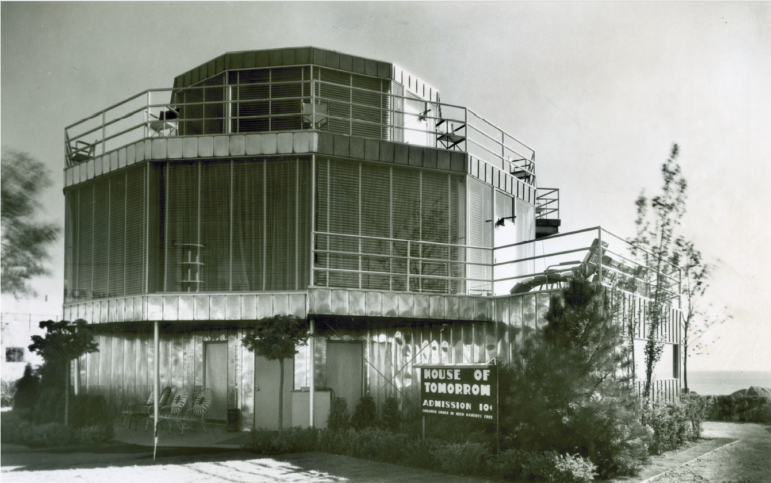 The House of Tomorrow at the 1933 World’s Fair. (photo courtesy of the Wisconsin Historical Society)

The 1933 World’s Fair drew 39 million visitors during the depths of the Great Depression. This fact was doubtless a major factor in Chicago-based developer Robert Bartlett’s decision to purchase 16 structures from the fair, including five houses that had been among its most popular attractions. Bartlett transported the houses to northwest Indiana to promote the new community of Beverly Shores — about 40 miles from Chicago — to prospective homeowners.

Today the five houses remain on the lakefront within the Indiana Dunes National Lakeshore. They are now owned by the National Park Service and leased to Indiana Landmarks. Indiana Landmarks has assigned the other four houses to live-in sub-lessees who have restored them in exchange for long-term residential leases.

By contrast, the House of Tomorrow has fallen into serious disrepair, although it remains largely structurally sound. Plans for its restoration are being developed in the same spirit as Keck’s original forward-looking design, with special focus on energy efficiency and indoor comfort.

“One of the challenges — which is fairly notorious historically — was that the air conditioning system kind of got a bad rap because it couldn’t keep up with the heat gain, and people blame it because of the windows,” Zeiger explained. “The reality is that Keck designed the original window system as what we would call thermal pane today.

“Because it was only supposed to be up for a few months, [the developers] didn’t feel it necessary to spend extra for essentially another round of glass. And they just did it in plate glass, which if you remember back to science class … if you build an 8- or 12-sided plate glass enclosed building, you’ve really just built a terrarium.”

During the fair, blinds were installed in the house, which greatly reduced the indoor heat gain.

“The House of Tomorrow was just backwards. They were pulling return air near the outside and the supply was on the inside,” Zeiger said. “So one of the things we’ll do on the project will be to put the conditioned air where it belongs [near] the outside, and pull the return air towards the middle.”

Despite its many innovations, the House of Tomorrow was almost certainly uncomfortable indoors both summer and winter, according to Jose Rodriguez, senior associate for built ecology for WSP USA, which is providing mechanical, electrical and plumbing engineering services for the project.

Enhancing indoor comfort levels along with increasing energy efficiency were important goals for Rodriguez in his work on the House of Tomorrow restoration team. The glass represented a major challenge.

“It’s a piece of jewelry. It is a piece of glass around all sides of the house in two upper stories. We cannot reduce the amount of glass because that will defeat the purpose of the restoration and of the design,” Rodriguez said. “So we [tested] more sophisticated types of glass. One was an insulated glass unit that has internal reflective blinds within the two panes that would reduce heating consumption by about 48% compared to double pane glass.

“We also tested a closed cavity façade [with] a ventilation system within the glass itself. That reduced the heating demand by 60%. But those things were a little bit out of our reach when it came to the budget. So we left it at a triple pane glass which is not as good but still pretty good.” 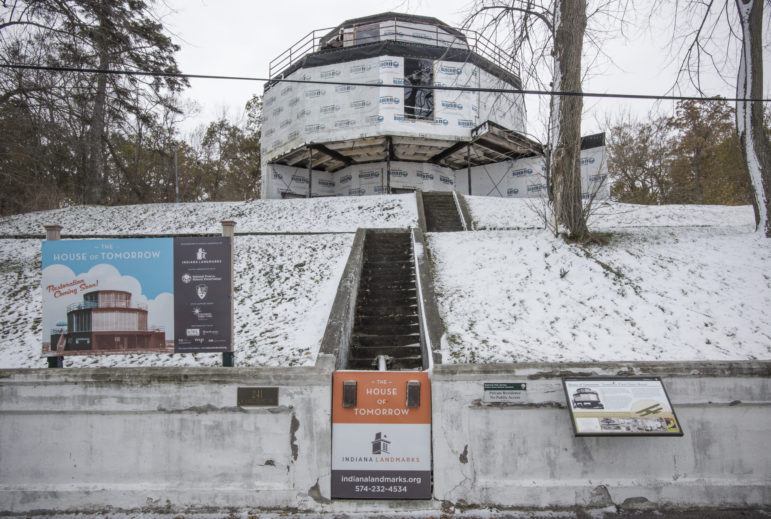 The House of Tomorrow as seen from the street. (photos by Lloyd DeGrane)

“We cannot change the height or the tread of the [spiral] stairs,” Rodriguez said. “This is one of the most significant aspects of the house. We could not raise the floor. Part of the solution was to include an electric radiant system for the floors that utilizes the inner mass, the tubing that is required for the hydraulic system.”

The small footprint of the house, its spiral staircase and landmark status also prevented the team from devising a single mechanical configuration for the entire house.

“We also tested at least seven different configurations of mechanical systems,” Rodriguez said. “And we came to the conclusion that there is not one solution. There’s not a single measure or system that will meet the requirements to condition this house.”

At present, there are no plans to pursue LEED or other sustainability related certifications, although that may change as plans become more fully developed, Kessler said.

“What we’ve talked about is trying to make the building as sustainable as possible, given the constraints that we have and the historic nature of the building,” she said.

The estimate for needed renovations presently stands at $2.5 million, almost entirely provided by the lessee, who will have substantial latitude in choosing finishes and furnishings. However, the ultimate goal is for the House of Tomorrow to reflect Keck’s forward-looking perspective while retaining its iconic look, Zeiger said.

Obviously , the Negawatt is the most cheapest produced Megawatt at all.