DEALING WITH "RETROPATCHES" DURING A NERC CIP AUDIT

HOW DO YOU DEAL WITH RETROPATCHES DURING AN AUDIT?

Was your security patch “available” in May when it appeared for the first time on your vendor’s website or was it “available” in January as it says on the vendor’s published documentation–that didn’t appear until May? Tracking security patch availability dates is key to compliance and for proving compliance during an audit.  Unfortunately, on-line vendor information documenting patch availability dates can vary over time.  In our process of tracking patch availability for Industrial Control System entities, FoxGuard has discovered multiple incidents where vendor patches appear in vendor documentation in an apparently “backdated” fashion.  That is to say, checking a patch source diligently (every 35 days according to the CIP standard for instance) might suddenly reveal an available patch that is dated from 3 months prior, without warning.  I call these patches “retropatches”.
Retropatches are a problem in audit, because an entities’ documentation for installation of security patches will show that, at minimum, this retropatch was installed 3 months after it was available according to the vendor documentation.  It can be hard to prove to an auditor that retropatches suddenly appeared and were not instead missed by the entity 3 months prior, as the auditor might reasonably suspect.

WHO IS AT FAULT?

Before looking at some examples of retropatches from FoxGuard audit documentation, I’d like to clarify that I don’t have any evidence nor do I believe that retropatches represent any malevolence on the part of the software patch vendor.  The original term we used was “backdated patches,” because, when the patch appeared on the vendor website, it appeared to be backdated.  I believe this is just an artifact of perspective.  From the vendor perspective it’s likely the patch process began at the earlier date, but for various circumstances (perhaps documentation, testing, clarification, etc.) the actual release date was pushed back and the related documentation was not edited/updated showing the new actual release-to-customers date. Because I think the term “backdated patches” could imply malicious intent on the part of the vendor I recommend “retropatches” as a more neutral term.  I would also bet that most vendors have no idea that their customers care about the documented release date of a patch, or that it might theoretically cost a customer $1 million per-day-per-event in the case of a CIP audit.  Vendors that I have spoken with who track such things show some very low update rates for security patches overall.  That a small percentage of their customers care whether the documentation is dated Jan 2018 or June 2019 is likely unfathomable to them.
It could even be that some vendor(s) defines the “patch date” to be the date the patch was created, as opposed to defining it as the date the patch was released to their customers.  It’s easy to understand that many processes can exist between writing and releasing a patch that would separate those dates, testing for instance.

Let’s look at 3 examples of retropatches from FoxGuard’s documentation:I picked these examples only because they are representative and not to call out these vendors in particular.  There are, after all, many reasonable processes that can cause this to occur. In these screen shots note the dates displayed in the bottom right hand corner.  I have cropped the screen captures for clarity and to de-emphasize vendor identities somewhat.  I also use a term we’ve coined internally, “patch mining,” to refer to the process of collecting all of the information about a patch.

Figure 1 captured June 6, 2018 shows the latest available driver software is version 23.1 dated February 21, 2018.  But in figure 2 captured June 22, 2018 it shows the latest driver software is version 23.2 dated May 30, 2018.  We might expect that firmware to appear in our collection on June 6, but it does not.  If you revisited the site on July 6, (a month after your first visit) and managed to evaluate the patch on that very same day, an audit seeing a May 30 firmware date, would still conclude it took you 36 days: outside of your 35-day window.

An especially forgiving auditor might overlook a one-day gap, but some retropatches are anachronistic by months. See example 2.

Retropatches and out of order firmware version example. 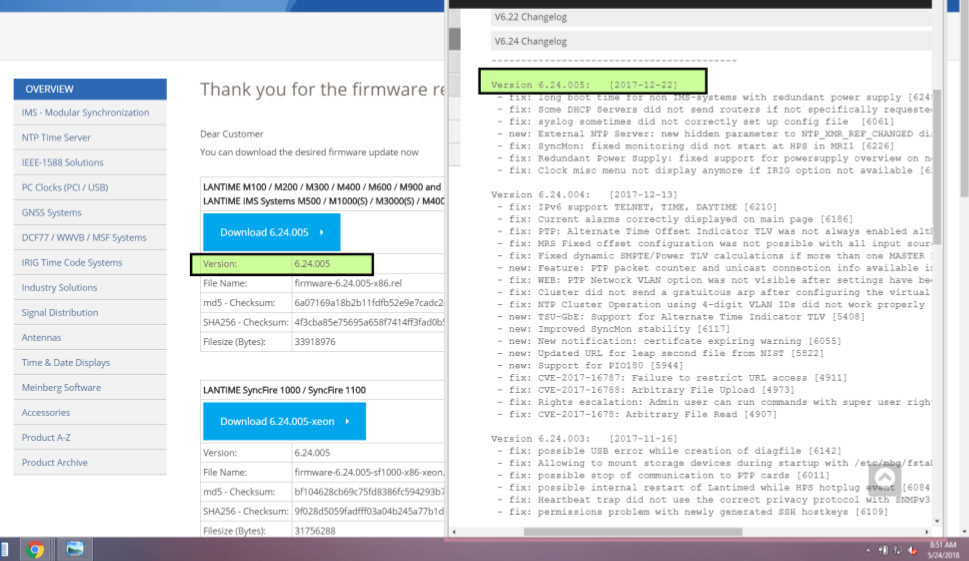 Now look at Figure 4 where the patch mining date is June 22, 2018, a little less than a month from the previous information collection.  In this figure we see the vendor documenting multiple patches that should have appeared in the mining information from Figure 3.  In particular, this screen shot documents a Version 6.24.011 dated April 24, 2018, which we would have expected to appear in the May 24 information collection. 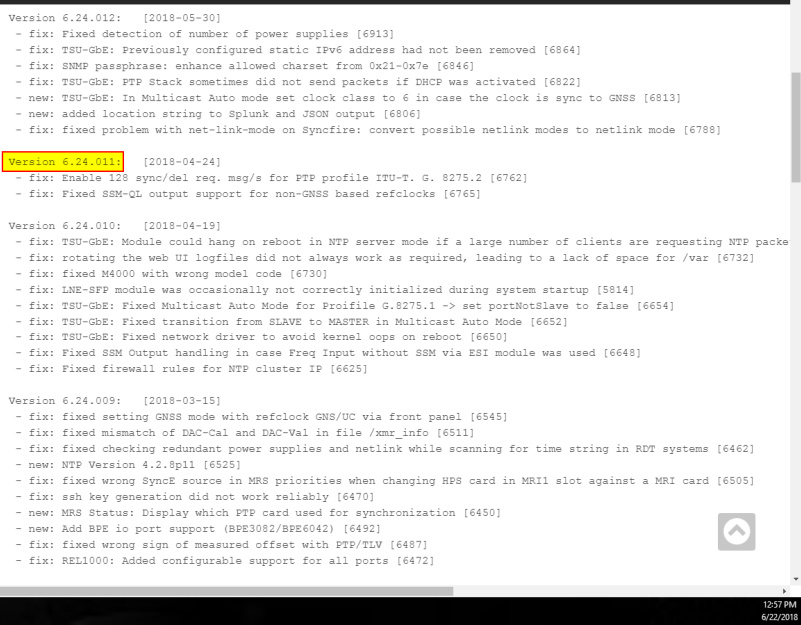 It matters exactly where and how you get your patch information.  Vendor information can be differ between multiple documents from the same vendor. In Figure 5 we see the vendor website indicating that the latest firmware version for a particular product is [Vendor X]-[Product 4]-5-R324-[blah] dated January 25, 2018. 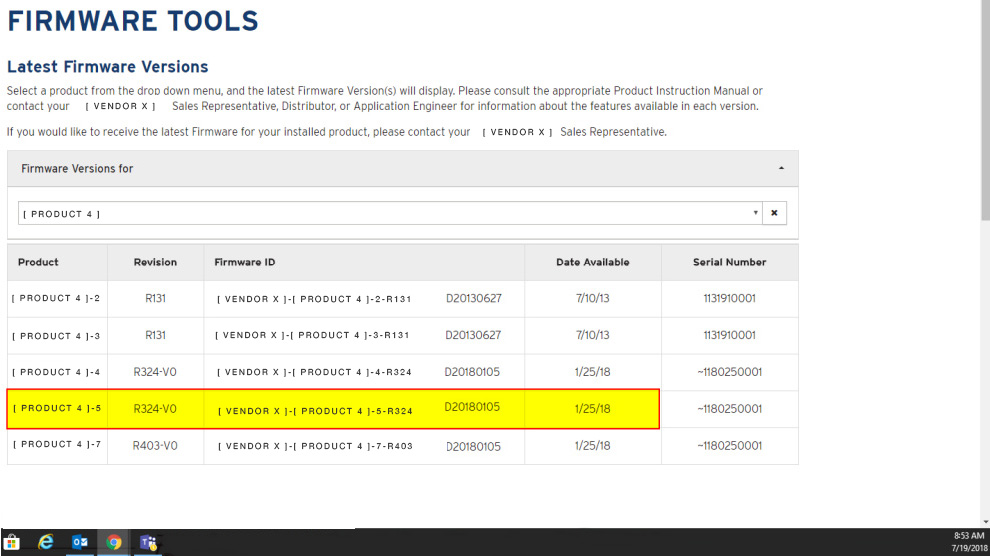 Figure 6 shows that the documentation manual for the product (mined on the same date as above: see bottom right hand corner) lists a newer version of firmware as current: version [Vendor X]-[Product 4]-5-R325-[blah] dated March 29, 2018 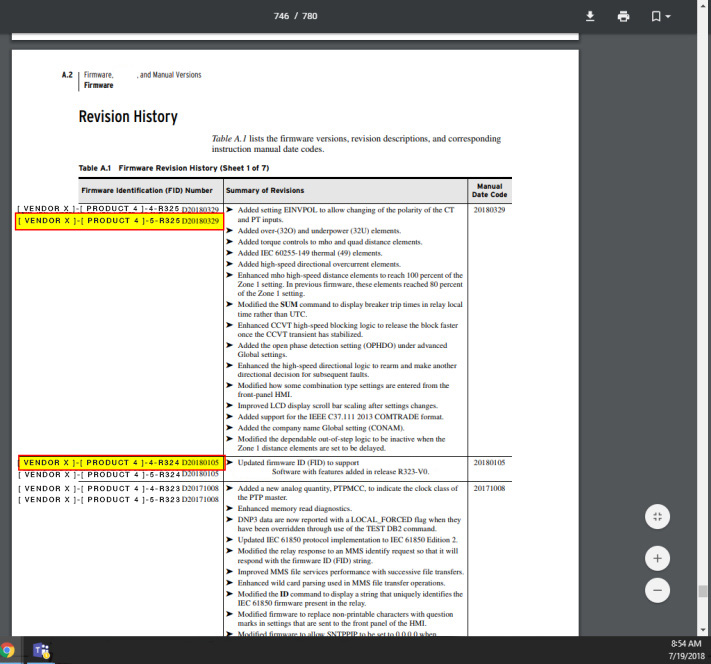 In this example we see different latest firmware version numbers collected on the same date from different documents on the vendor website. Looking at the bottom-right of both pages we see this seemingly contradictory information was mined on the same date: July 19, 2018. It’s not hard to imagine where documentation from email, newsletters, etc. might differ from that available on a web page.

It’s important to carefully document your patch information gathering (patch mining) as well.  In addition to the information we enter into our patch information database, FoxGuard also documents the actual act of patch mining with screen shots and timestamped evidence.  That gives us and our customers a visual record in the form of snapshots to support audit concerns should a question arise.  The only evidence of exactly what you saw on a vendor’s site, is the documentation you make yourself of that visit.  Because different sources from the vendor may conflict, your process should be consistent and document exactly where you mine patches from (email, web site, and other documentation).  Be aware that firmware versions may appear out of order and that the most recent patch version may not be the one with the highest version number. If you are responsible for patch mining in your organization, best practice would be to store this meta-documentation as well, for every product firmware, from every vendor, every month, as you mine it.

The digital workplace is an environment that enables teams, remotely, to collaborate, manage projects, communicate, and maintain productivity. Many companies, utilities included, have some type of virtual or digitally remote office capability.

I want a return to the old March Madness. 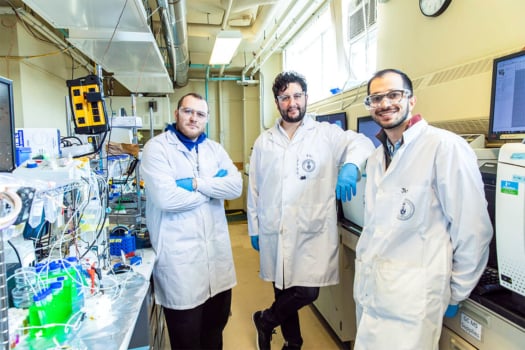 “For decades, talented researchers have been developing systems that convert electricity into hydrogen and back again,” said Ted Sargent, University Professor in the Electrical and Computer Engineering Department.“Our innovation builds on that..

Funny how Mitch fails to mention that the treasury department run by a person  selected by Trump. basicly giving Trump a blank check for...

Gary commented on ...
Idaho wind farm could be among the worlds largest wind energy plants

This is an amazing capacity addition to a small market.  Idaho already generates 75% of their power from renewable energy, the balance from...

Anybody know what is meant by "acetes"?

Not sure I understand the headline to this post. What is broken and how is it relevant to the projects?