Critical of Nuclear…. Or Nuclear is Critical (to net zero)

In a debate on our company message board on nuclear power the following 7 questions or points elicited the response that forms this article, they were:

Here is the response, it has a UK focus but the debate is applicable to many regions. To be honest I could add even more to this in terms of data since then, particularly around the environmental impact of rare earth metal extraction, but this as it was written (quickly) at the time.

I think there are around seven points in here that you are making and I'll try to take each in turn. However, in answering these I am going to suggest further reading as it would be an even longer response (!) if I was to cover all the points in detail.

As an intro though I’d ask you to read the following from the late David MacKay:

Idea of renewables powering UK is an 'appalling delusion' – David MacKay | Energy | The Guardian The video in the Guardian article is very much worth watching.

So points 1 and 2 are exposure at sites where issues have occurred in the past and when things do go wrong can affect a lot of people, first a couple of links:

The initial cover up of the Chernobyl disaster and volume of press coverage around Fukushima have undoubtedly inflated this misconception. There is a wealth of information out there on the topic, one viewpoint that provides an interesting insight is based on deaths per kwh of energy sources, you can read more on this here:

What are the safest and cleanest sources of energy? - Our World in Data

It’s not just deaths of course but pollution, impact of sourcing raw materials, waste products etc. I really recommend reading this whole article. And there are loads more resources out there and books.

Question 3 is on long term storage and the need for this to be resolved – in short yes but also this is already priced into new nuclear (which is question 4) as part of waste and decommissioning. What not priced into our current energy system is managing the legacy waste and decommissioning from and of renewables and the associated system such as batteries. The amount of materials required and waste is a whole topic in itself and it is not in the debate and it needs to be as well as the energy cost and emissions of manufacture. Rule of thumb 1 tonne cement = 1 tonne Carbon and 1 tonne of steel = 1.8 tonnes of carbon. Not including all the wires and substations and other stuff then required of course.

See below for some examples: 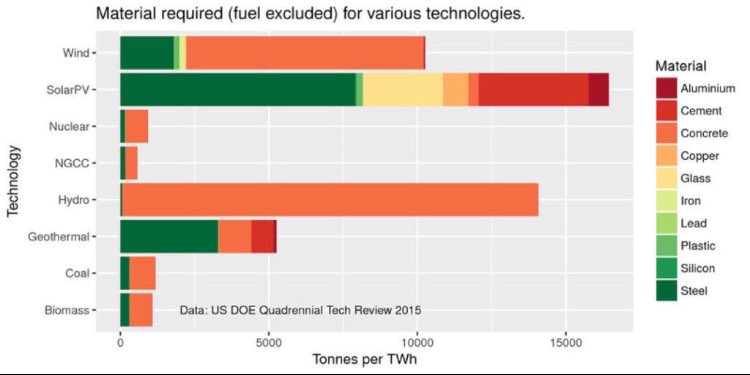 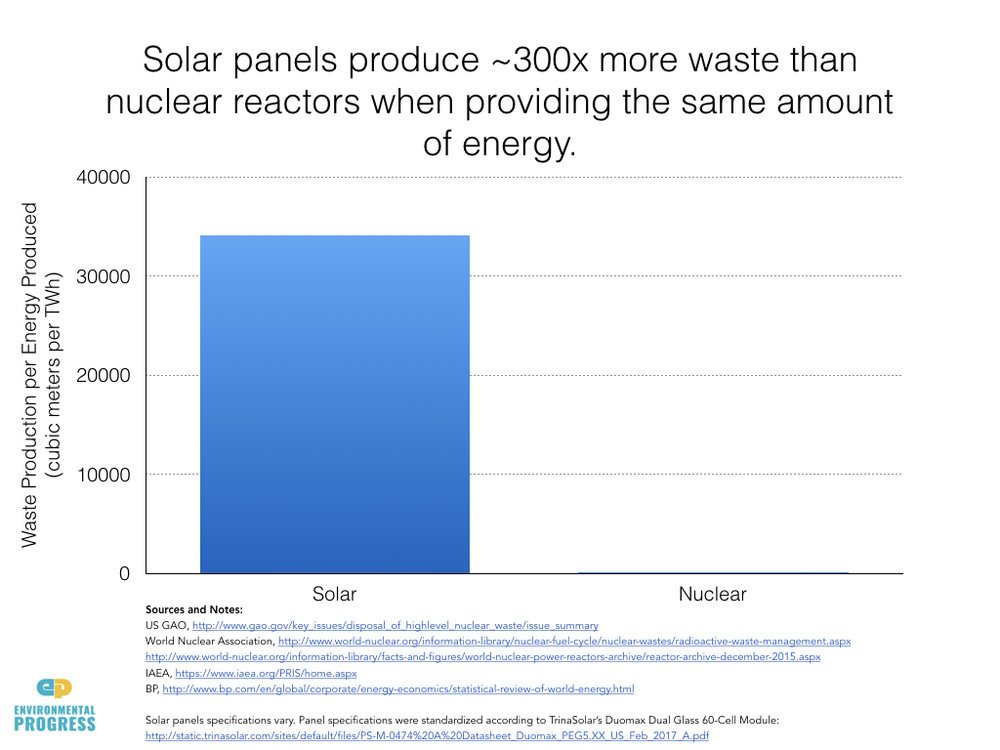 Whilst we are talking materials (I’m a metallurgist….) let’s also look at sourcing them. The amount required for a renewables heavy system as we have seen is significant – including Lithium for batteries for both system mgmt. and EVs (which are then hard to recycle). Have a look at this reference from the natural history museum just for the UK:

It’s not just how much we need, it’s where we get it from and the impact that has. Just have a look at how we get Cobalt on some ethical questions as well as environmental.

Question 5 is on price. Let’s talk numbers – you have compared the project cost to EDF and the CfD price of £92.50 to a price of OSW of approx. £40/MWh. Please read our Engineering Net Zero (Reports Archives - Engineering Net Zero) reports where we cover this topic in depth. Let’s break down the myths with some of the key points:

1. Comparing levelised cost of electricity is not the same as what we the consumer pays. Rising systems costs due to intermittency means we pay more than just the £40/MWh as you include the need for back up etc., new transmission systems etc. the need for hydrogen as energy storage etc. as well as renewable obligations in our bills

2. We currently don’t have any £40/MWh turbines operating. What we currently have is a fleet on average is at a CfD of just over £100/MWh. We are yet to see the new turbines built)

4. From the 2020 treasury report on infrastructure we currently pay £10bn per year for renewables (NIS_final_web_single_page.pdf (publishing.service.gov.uk) page 50), just for info.

5. Waste and decommissioning is not included in the price

Whilst comparing apples with pears (firm v intermittent costs) there is also another fundamental issue. People are comparing a future theoretical price of OSW with the current price of nuclear. If the future OSW price is to be reduced - and by all accounts we hope it will - then we should also assess whether nuclear is able to achieve the same downward price trend. Evidence from HPC suggests the learning from Unit 1 has already meant that progress on Unit 2 has been between 20% and 30% quicker/cheaper, with further learning also to be taken to any future units such as SZC. So actually, the evidence suggests that adopting a similar fleet approach that has benefitted OSW will also benefit nuclear, before we even consider cost of financing approaches that would further drive down the cost.

Don't get me wrong, I’m not against renewables at all and I think we need everything to reach net zero - but I don’t think we should comparing two numbers together that are not really same thing.

We are just about to publish a report on the retail market which will also cover some of these myths – please keep an eye out (now published - enz-retail-market-paper.pdf (snclavalin.com)). The previous ENZ papers also cover what is needed to bring the price of nuclear down. Over 40% of the price is financing and this can be significantly reduced which is part of the current govt focus on the RAB business model. Further reductions can be made from having a sustainable build programme and next of a kind build to reduce engineering and construction costs. Can this be done at pace – yes – ref the build rates in France, Sweden etc. Do we need it? Absolutely - look at the build rate required analysis in ENZ (the-race-to-net-zero.pdf (snclavalin.com)).

So on to the next question on system prices and tying us into high prices in the future and you mention Germany’s move away from nuclear (if you watched the David Mackay interview by now you may have guessed where this is going…). Let’s look at Germany. When we look at the reducing costs of solar, wind and batteries one might conclude that a rising share of these things will introduce an era of falling electricity prices. In reality the opposite has been true. Before 2000 and embarking on a comprehensive expansion of renewable generation German residential prices were some of the lowest in Europe and declining at less than 0.14 Euro/kWh. By 2015 Solar and Wind was at 84GW and exceeding fossil fuel plant capacity and by March 2019 more than 20% electricity was coming from renewables. In 2019 Germany’s electricity prices had more than doubled to 0.29 Euro/kWh and now has the EU’s second highest electricity price second only to Denmark (41% wind generation in 2018) at 0.31 Euro/kWh. (Ref: Vaclav Smil: The numbers don’t lie). We need to assess on a system cost basis.

Final question is proven reactor technology. Any technology needs developing into commercial use – this has happened in wind, solar, nuclear and in any generation technology deployed at scale. HPC is not unique – a global EPR fleet is being built and growing and being commissioned: The 2nd EPR reactor at China’s Taishan nuclear power plant | EDF (edfenergy.com). This means there will also be global OPEX – a far better position than we have with the UK unique AGR (advanced gas reactor) fleet which whilst not built anywhere else yet has reliably provided us with zero carbon electricity for many decades and we are really going to miss as they start to close in this decade – along with a lot more firm power in the UK and interconnected Europe. We will no doubt look forward to more records falling on our system – more electricity margin notices (6 this winter, the first since 2016 where there was just one when the French nuclear fleet had reduced output) and record prices, January averaged £77/MWh peaked at £1400/MWh etc.. (for some reason this seems to get less media coverage than a low carbon Easter weekend for example). In any case I really recommend downloading the electricity map app and you can see live generation sources for many countries and the associated carbon footprint of that country.

· Environmental impact, land and sea use

· Decommissioning and Waste mgmt. – significant amounts of hard to recycle toxic waste from solar and batteries as well as large wind components (i.e. blades) is a future environmental challenge in waiting and needs to be addressed

Just to finish up:

I’d like to know if anyone thinks nuclear medicine is a bad thing...