Managing Director of Geoclime, LLC, providing quality and risk management consulting for energy, water, science and engineering. Multiple careers in government and industry as a research...

Location and success of solar and wind power facilities depends strongly on climate ― how much the sun shines and how strongly the wind blows over predictably long time periods. If global climate change is now in progress, what is the outlook for solar and wind power as regional cloud and wind patterns adjust to the changing global climate? This summarizes why much more study of these issues is needed as part of risk-management diligence for renewable energy projects.

Electric power generation by combustion of fossil fuels emits greenhouse gases (GHGs) which have been implicated as a driver of climate change. Power from solar irradiance ― either from thermal or photovoltaic (PV) conversion ― and wind-driven turbines are being promoted and deployed as zero-GHG alternatives to generation driven by high-GHG combustion of coal and lower-GHG combustion of natural gas.

Models for How Climate Affects Solar and Wind Power Potential

At least as reflected in the peer-reviewed scientific literature, serious consideration of how climate change might affect solar and wind power generation has received very limited attention compared with the high degree of attention paid to climate change as a geophysical phenomenon. The tacit assumption in deployment of renewable energy production has been that geophysical support for solar and wind power will continue undiminished into the future.

At the executive level, the climate-related threats to efficiency of solar and wind power involve several effects predicted in various models for global climate change:

The current backbone of climate-change forecasts are general circulation models (GCMs) ― differentiated by focus on either atmosphere or ocean ― which leverage temperature patterns and trends as predictors of fluid circulation patterns. Atmospheric GCMs, as usually employed in climate-change studies cited in the context of energy production, make different approximations for clouds and aerosols (microscopic dust particles or droplets suspended in air). Indeed, cloud and aerosol effects remain key challenges in untangling uncertainties in climate forecasts.

Scientific studies of climate-change sensitivity of renewable energy systems have addressed only certain regions of interest to particular stakeholders. Studies of specific regions have included California USA, Europe, and southern Africa. The following table summarizes the main characteristics and findings of those limited studies. 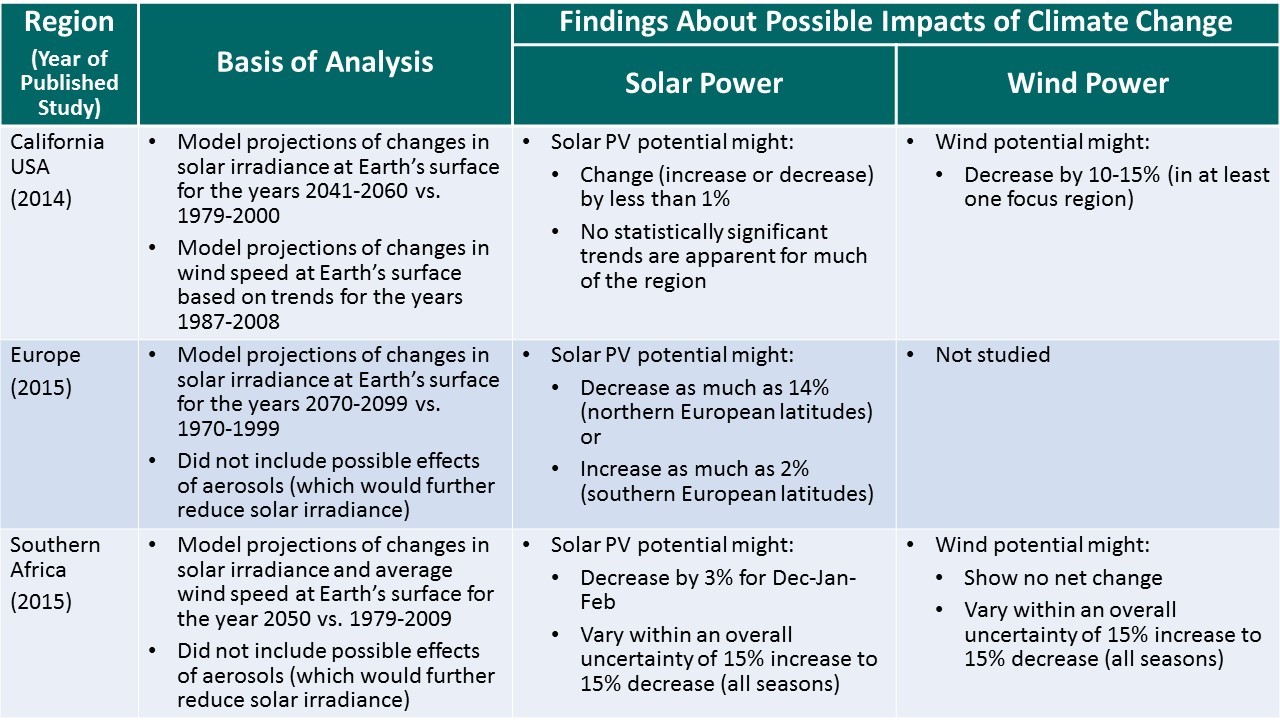 The main takeaways from the summary table are that:

Future application of more sophisticated climate models might help reduce uncertainties in forecast of potential solar and power trends. But until more precise and accurate forecasts become available, conservative planning should incorporate risks of loss in solar or wind potential in some locations.

Effective risk management in long-range planning of power-generation portfolios must include considerations of whether generating assets might become derated ― or, in effect, lose generation capacity ― over time. It now seems clear that, in addition to the common considerations of asset age and maintainability, long-term performance ratings of solar and wind power assets should also consider possible effects of climate change in reducing their decadally-adjusted generation capacities.

To upgrade risk management of power generation portfolios, the following provisions are recommended for solar and wind power resources: