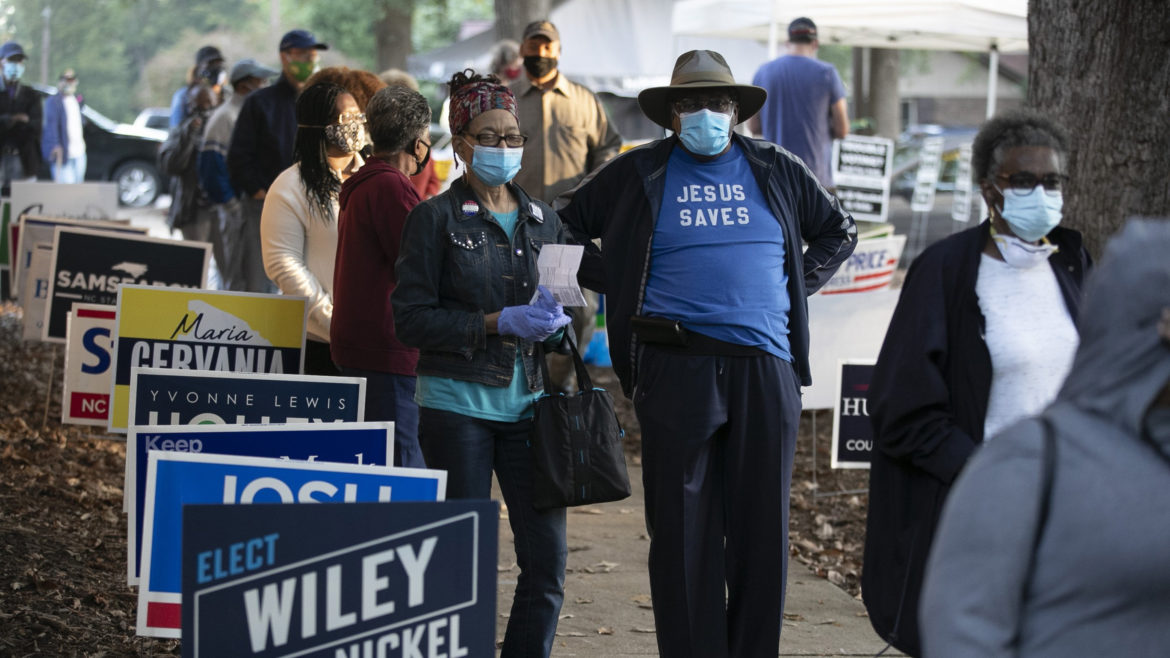 The utility’s general election campaign contributions were more bipartisan than its primary giving, a sign that it might be hedging its bets on the election outcome.

Duke Energy’s political action committee has again mostly rewarded lawmakers who voted with them on a controversial ratemaking bill and punished those who didn’t, according to the most recent filings to state election officials.

As they did during primary campaigns early this year, the company’s contributions in the general election through Oct. 17 favor Republicans — especially in a handful of races that could determine control of the legislature. And while the company gave to more Democrats than it did before Super Tuesday, GOP candidates got more than twice as much money.

At the same time, Duke appears to have abandoned the group it funded exclusively earlier this year to campaign independently for a select group of candidates. That entity, Citizens for a Responsible Energy Future, got half a million dollars from Duke in February but nothing since. Its only expenses through the third quarter were bank fees and legal services, according to Internal Revenue Service reports.

While Duke is rumored to have donated millions to other political committees, those contributions — if they exist — are likely to remain hidden until well after the election. For now, public records make clear the utility is investing heavily on incumbents, mostly Republicans who voted with them on their top legislative priority from last year.

Duke Energy PAC’s $126,000 investment in legislative races so far has been modest compared to its primary contributions, which totaled over $300,000. But according to a compilation of state data by the pro-Democrat Long Leaf Pine Slate, the utility’s PAC is still second only to the North Carolina Realtors PAC in corporate PAC giving for the year.

There’s plenty at stake for Duke Energy in this year’s election.

Gov. Roy Cooper, a Democrat likely to win re-election, has charted a course for zero climate pollution in the utility sector by 2050, and a 70% reduction in emissions by 2030. Duke has pledged to get part of the way to these goals, but it’s unlikely to go all the way unless compelled by law.

At the same time, lawmakers across the political spectrum are increasingly frustrated with Duke’s monopoly. Many want to follow the lead of South Carolina and examine opening up wholesale markets to some form of competition.

Then there’s the existential crisis Duke faces because of its business model: building large, centralized power plants financed by investors paid back over time by captive ratepayers. With demand for electricity largely flat, it’s become harder and harder for the company to justify new plants and higher rates.

This last dynamic helped provoke the company’s controversial ratemaking bill last year, which would have allowed the company to ask regulators to approve multi-year rate increases. Clean energy advocates and other critics were opposed, arguing it would set Duke up to collect millions in excess profits.

Senate Bill 559 had bipartisan support in the state Senate, where it passed. But it was scuttled in the House after Rep. Larry Strickland, a Republican from Johnston County, passed an amendment that would have examined a range of ratemaking reforms, including requests for multi-year increases.

As it did in the primary, Duke rewarded many of the lawmakers from both parties who championed and voted for the measure – regardless of how competitive their general elections were expected to be.

Senate President Pro Tem Phil Berger and House Speaker Tim Moore, both Republicans in safe districts, got the maximum allowable amount of $5,400, as did others in the GOP leadership, including Rep. John Bell of Wayne County, Rep. Jason Saine of Lincoln County, and Sen. Bill Rabon of Brunswick County.

Democrats also benefited. Sen. Minority Leader Dan Blue, a chief sponsor of S559, represents a heavily Democratic district in Raleigh and has no credible challenger; he got the maximum. Other Democrats who voted for S559 or against the Strickland amendment, including Rep. Carla Cunningham of Mecklenburg County and Sen. Toby Fitch of Wilson County, also benefited, though not as heavily.

Democrats need to flip six seats in the House and five in the Senate to gain the majority. To the extent it engaged in the handful of races that could tip the balance, Duke mostly backed Republicans.

There were also notable omissions. Republican Reps. John Szoka of Fayetteville and Ted Davis of New Hanover County are in competitive districts; both voted for Strickland’s amendment and got no Duke money. Neither did Republican Sen. Bob Steinburg, who voted against S559 and is running a close race in the northeast corner of the state. And though Duke supported Republican Senate challengers in Wilmington and Fayetteville during the primary, this fall they stayed out of these tight contests for seats now held by Democrats, Sens. Harper Peterson and Kirk deViere.

With the Cook Political Report rating Republicans likely to keep the House and the Senate a toss-up, Duke could be hedging its bets. It gave $5,400 to Cooper’s re-election campaign. It contributed to nearly two-dozen legislative Democrats, including a dozen who didn’t side with it on S559 and the top two Democratic leaders in the House. The PAC’s giving could also reflect the belief many share that any major climate or energy policy will require bipartisan support, no matter who holds the gavel come January.