In part 1 of this series (linked below) we started exploring the California Independent System Operator (CAISO). We examined CAISO's self-description, terminology, information sources and some of the CAISO entities.

At the same time as Part 1 we also posted an abbreviated CAISO Glossary (with links to the full Glossary in Part 1). The link to the abbreviated glossary is below.

In Part 2 we completed the entities and started the examination of CAISO processes. A link to Part 2 is below.

In Part 3 we continued to focus on CAISO Processes. A link to Part 3 is below.

In Part 4 of this series we continued to focus on processes with our review of the CAISO Day-Ahead, and Real-Time Market Processes. A link to Part 4 is below.

Part 5 was the final post on processes and the California operations of CAISO. It covered E-Tagging, Post-Market Validation, Price Corrections and Settlements. The link below is to this paper.

In this post we explore the CAISO as it expands beyond California. The CAISO is following several paths that may lead it to evolve into a Western Regional Transmission Organization (RTO). One of these paths is the Western Energy Imbalance Market, and the other is an in-progress initiative to become its own Reliability Coordinator, and to offer this service to other WECC utilities outside of California. There is also a legislative initiative to endorse the path to become a Western RTO.

We will cover all of the above in this post, but first, in the next section, the answer to a big question.

The following table lists the states and provinces in the Western Electricity Coordinating Council (WECC) along with the gross domestic product (GDP)[1][2] and the population[3][4] of each.

Furthermore there have been several attempts outside of California to form regional organizations in the WECC area, but none of these have succeeded. The CAISO was founded 20 years ago, and after a bumpy start, has become a very successful and efficient organization.

So one answer is, CAISO appears to be the only viable option for a widespread Western RTO.

But another answer is perhaps more important in the long-term, to provide a major increase in the "law of large numbers" mitigation to wind and solar power variability. Even though California already has a large percentage of the renewables in the west, they do not have a large (enough) area, and it is the wrong shape. Weather patterns mostly move from the west to the east, and since California is a "north and south" state, these pass through the state very quickly, with the California renewables seeing similar solar and wind resources at about the same time. By greatly expanding this area, there is a high probability that, when California has low wind speeds, some other western area will be windy. Although low-solar is less common (and mainly in the off-peak late fall through early spring time), there will still be some mitigation.

Renewables offered into the day-ahead market will also have a greater chance of finding a buyer through the Energy Imbalance Market described in the first section below.

The California ISO’s western Energy Imbalance Market (EIM) is a real-time bulk power trading market, the first of its kind in the western United States. EIM’s advanced market systems automatically find the lowest-cost energy to serve real-time customer demand across a wide geographic area. Utilities will maintain control over their assets and remain responsible for balancing requirements while sharing in the cost benefits the market produces for participants. The map below shows current EIM participants, and those utilities that plan to join in the next few years.[5]

Since launching in 2014, the western EIM has enhanced grid reliability and generated cost savings in the $millions for its participants. Besides its economic advantages, the EIM improves the integration of renewable energy, which leads to a cleaner, greener grid. 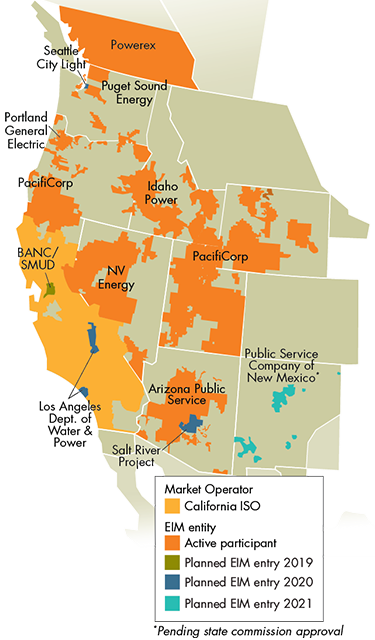 EIM is governed by a five member body with delegated authority over rules specific to the western EIM.

To create a governance structure for EIM, a transitional committee was formed, inclusive of stakeholders throughout the west. These stakeholders came together to design a governance framework formalized in a charter. The charter establishes the EIM Governing Body, which has been delegated levels of authority from the ISO Board of Governors on rules specific to participation in the EIM. In addition, the charter establishes two other components of the overall governance structure for the EIM: a Body of Regulators and a Regional Issues Forum.

The EIM allows participants to buy and sell power close to the time electricity is consumed, and gives system operators real-time visibility across neighboring grids. The result improves balancing supply and demand at a lower cost. The EIM platform balances fluctuations in supply and demand by automatically finding lower-cost resources from across a larger region to meet real-time power needs. EIM also manages congestion on transmission lines to maintain grid reliability and supports integrating renewable resources. In addition, the market makes excess renewable energy available to participating utilities at low cost rather than turning the generating units off.[6]

The North American Electric Reliability Corporation (NERC) defines a Reliability Coordinator as: The entity that is the highest level of authority who is responsible for the Reliable Operation of the Bulk Electric System, has the Wide Area view of the Bulk Electric System, and has the operating tools, processes and procedures, including the authority to prevent or mitigate emergency operating situations in both next-day analysis and real-time operations. The Reliability Coordinator has the purview that is broad enough to enable the calculation of Interconnection Reliability Operating Limits, which may be based on the operating parameters of transmission systems beyond any Transmission Operator’s vision.

Reliability coordinators have been assigned for each area in the North American Grids as defined by the figure below:[7] 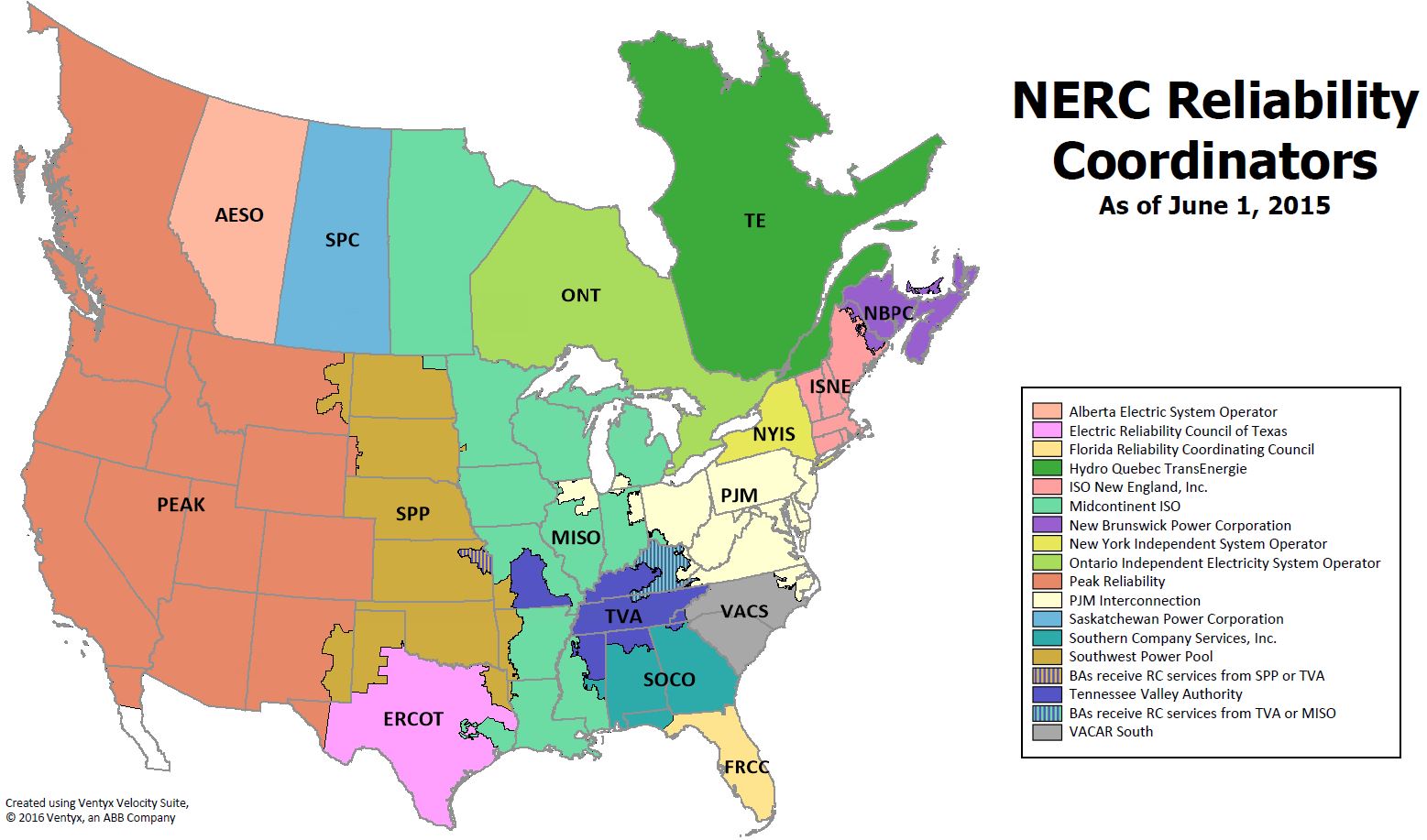 On Jan. 2, 2018, the California ISO announced it would become its own Reliability Coordinator (RC) in September 2019 and offer these services to other electricity balancing authorities in the western United States, Canada, and Mexico. CAISO notified Peak Reliability and its members per the above announcement. CAISO has also had discussions with other Peak Reliability members about the above intent. [8]

The ISO is now moving forward on two tracks to become a Reliability Coordinator (RC): obtaining certification from the North American Electric Reliability Corp. (NERC); and conducting a public stakeholder initiative process to set rates, terms, and conditions of the RC services.

The CAISO is also currently initiating a third track to implement software development and customer on-boarding.

The CAISO is working with Peak Reliability on the transition and is in continuing discussions with NERC, the Federal Energy Regulatory Commission (FERC), and the Western Electricity Coordination Council (WECC) regarding the new RC function. A public process was executed, with informational calls and three regional meetings in California, Arizona and Oregon which took place in January 2018. These discussions were used to draft a straw proposal for the rate design of the CAISO RC function, which opened the formal CAISO stakeholder initiative process. Meanwhile, the CAISO established an oversight committee and working groups with interested parties to discuss the transition and implementation of RC services.

A straw proposal was released on April 5, followed by a meeting with stake-holders in May. A draft final proposal for Reliability Coordinator Rate Design, Terms and Conditions was released on June 20. Comments were received on this document from the following participants:

The author skimmed through the comments and thought they were generally positive, and most had to do with ways to reduce the Tariff costs.[9]

After the above meetings CAISO made several amendments to the Tariff, etc. and held additional meetings with the stake-holders.

On July 26, the CAISO Board of Governors approved the proposed rates, terms and conditions for the CAISO to provide RC services.

On August 23, Idaho Power and PacifiCorp announced a commitment to receive RC services from the CAISO.

I have seen indications that most other Balancing Authorities in WECC will choose to use the CAISO BA services. The reliability coordinator services rate design, terms and conditions were filed with the Federal Energy Regulatory Commission on August 31. A FERC decision is expected in November, and the CAISO plans to launch its new services by July 2019.

The main question here is whether there will be an accelerated movement of CAISO to evolve into a Western RTO, or a slow evolution to take over various RTO functions. This has become a really strange political argument. For instance, some environmental groups support the fast-track, and others oppose it. The latter seem to be driven by the concern that CAISO will be "forced" to support positions that are contrary to California's leadership role in climate change mitigation.

A well-balanced report by Next10 reviews the main arguments for and against the above fast-track.[11] Although this report comes down on the "for" side of this argument, I personally believe a slower approach might be more effective. There are other WECC states that are as uncomfortable in bed with California as we are with them.

[1] Wikipedia, List of U.S. states and territories by GDP, this uses U.S. Department of Commerce data that was retrieved in June 2017, https://en.wikipedia.org/wiki/List_of_U.S._states_and_territories_by_GDP

[2] Wikipedia, List of Canadian provinces and territories by gross domestic product, This was in 2016 Canadian Dollars which were converted to U.S. Dollars at today's exchange rate of US$ 0.77 = Can$ 1.00, https://en.wikipedia.org/wiki/List_of_Canadian_provinces_and_territories_by_gross_domestic_product

[3] Wikipedia, List of U.S. states and territories by population, 2017 estimates were used, and this was based on an United States Census Bureau estimate. https://en.wikipedia.org/wiki/List_of_U.S._states_and_territories_by_population

[4] Winkipedia, List of Canadian provinces and territories by population, 2016 Census was used, https://en.wikipedia.org/wiki/List_of_Canadian_provinces_and_territories_by_population

Re: "Reduced costs for market participants by reducing the amount of costly reserves utilities need to carry, and more efficient use of the regional transmission system".

Reduced costs is not really so, right? Doesn't RE have a monopoly price when the sun is shining and the wind is blowing in California?  There is no competition with Nat Gas or Nuclear power, right?  And does your assertion of reduced costs include all the cost shifting of RE onto conventional energy ratepayers?