Charles Crews is the president and principal consultant of FPH Consulting Services and actively leads the firm's consulting engagements across a broad spectrum of operations management issues. ...

Biden’s $2 Trillion 'American Jobs Plan': What does it mean for the future of Natural Gas?

President Biden made his first visit to Pittsburgh as president this week to unveil the long-awaited physical infrastructure portion of his ‘Build Back Better’ plan now headlined the ‘American Jobs Plan’.  Many agree that the proposed plan will be the largest investment in infrastructure in at least a generation.  It is a plan that ambitiously supports robust clean energy upgrades, investments in EV charging stations, broad replacement of lead water pipes, and continued expansion of 5G telecommunication networks.  Yet during his remarks on Wednesday and in documented plans thus far, there is no specific endorsement for natural gas spending.

This could be inspired by the new administration's bullish position on climate and clean energy reform with $46 billion earmarked for clean energy manufacturing and another $35 billion in climate-related R&D.  It follows an earlier position taken by the President on his first day in the White House when he revoked the Keystone XL Pipeline cross-border permit, which has flipped-flopped through the past two administrations beginning with President Obama in 2012 (see Keystone XL Pipeline Political Timeline).

Of course Biden’s swift executive overturn of Keystone was not surprising given that the general party consensus for the project and others like it (e.g., Dakota Access Pipeline) have Republican support and Democrat opposition.  But collectively disapproval of Keystone and the absence of natural gas in the AJP could underscore a commitment to address acute climate change needs by blocking advancement in all fossil fuels.

So, the question remains what the future holds for natural gas.  The answer could signal challenges for the industry and it could be equally challenging for our energy future.

Can natural gas still be a gateway to a cleaner future?

The short answer: It already has been and is well-positioned to be for years to come.  The challenge: Will political leaders focus on what is good for the long run or just their election cycles?

Natural gas, the nation’s lowest-carbon fossil fuel, has been a key driver of cleaner energy over the past decade with domestic carbon emissions down 15% since 2005.  The International Energy Agency has credited natural gas with helping the U.S. become a global leader in reducing CO2 emissions.

The disruptive impact of greenhouse gas emissions is undeniable and became a global concern more than 30 years ago following severe drought, flooding, and vast fires in many parts of the world.  The United Nations Framework Convention on Climate Change set 1990 as a benchmark year to measure the world’s progress towards a cleaner energy future.

Between 1990 and 2007, U.S. energy-related CO2 emissions grew by an average 1.0% per year totaling 57 million metric tons which is equal to 12 million passenger vehicles driven for one year.

Since peaking in 2007, emissions have declined 1.3% per year and in 2019 the decline was 2.9% compared to 2018 – one of the largest reductions in the past three decades.  And since 2007, natural gas consumption has increased by an average of more than 2.5% per year with production increasing 5% over this same period. 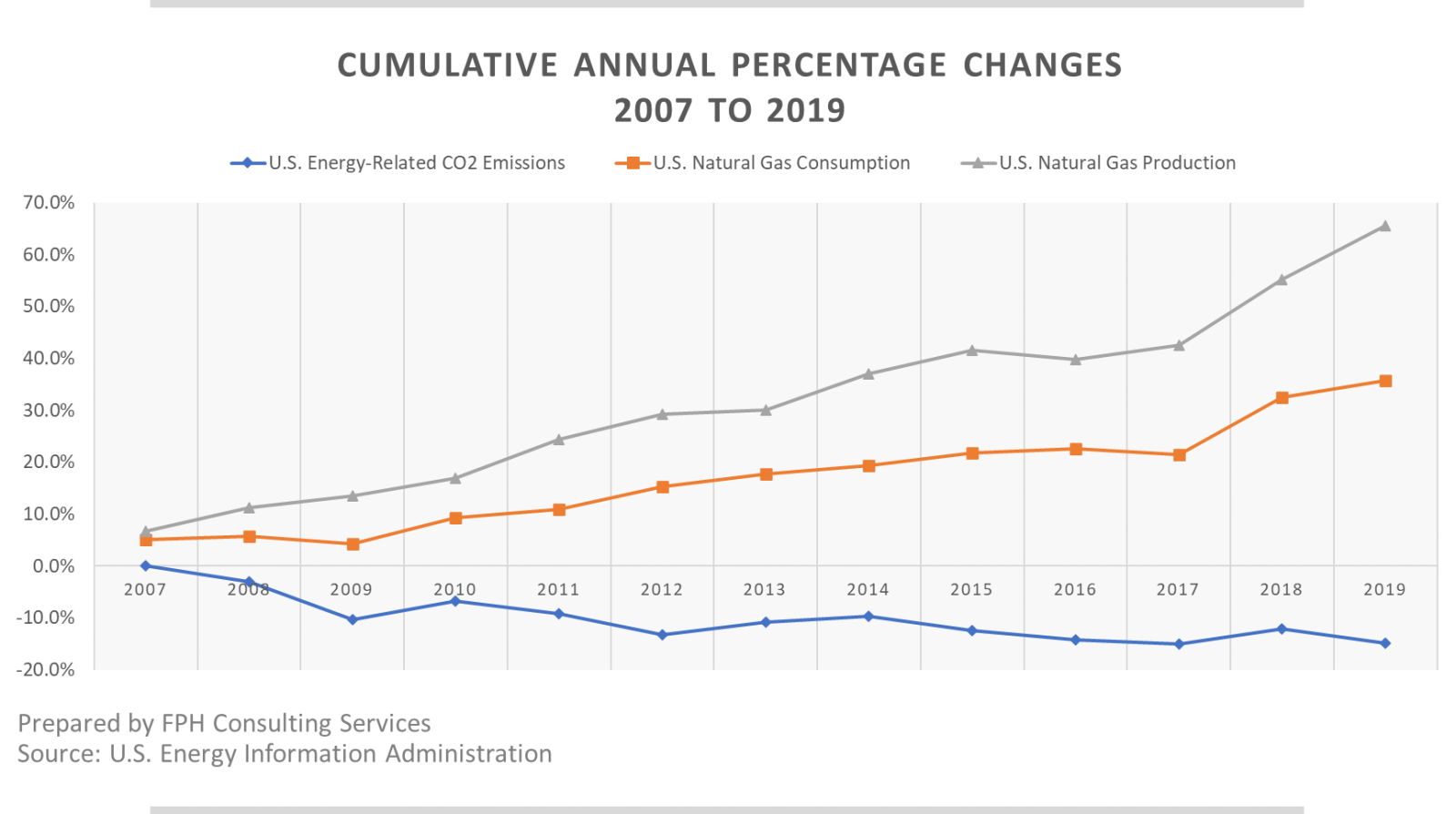 So as gas production and consumption have increased, carbon emissions have actually decreased.  This has largely been driven by shifts in electricity fuel mix with natural gas becoming the predominate source for power generation in 2016.

Demand for natural gas is as high as it ever has been.

The need for natural gas was front and center this past February during a polar vortex that left more than 4.5 million Texas homes and businesses without power for several days.  The unprecedented energy crisis in the ERCOT region was seen around the world and while the cause of the crisis is multi-faceted, there is one thing that all energy experts agree and that is how critical the natural gas system is to the state’s energy reliability.

In broader terms, the demand for natural gas has steadily increased over the past two decades.  In 2019, zero-carbon and natural gas-fired power generation increased while coal continued to decline.  Just a few years ago (2018 to 2019), the share of natural gas generation jumped from 35% to 38%.  Conversely, coal-fired generation precipitously declined to 23% which is dramatically down from its 50% share of electricity from 1990 to the mid-2000s.  In 2020, coal, the once predominant U.S. electricity fuel source, was less than nuclear for the first time since 1949. 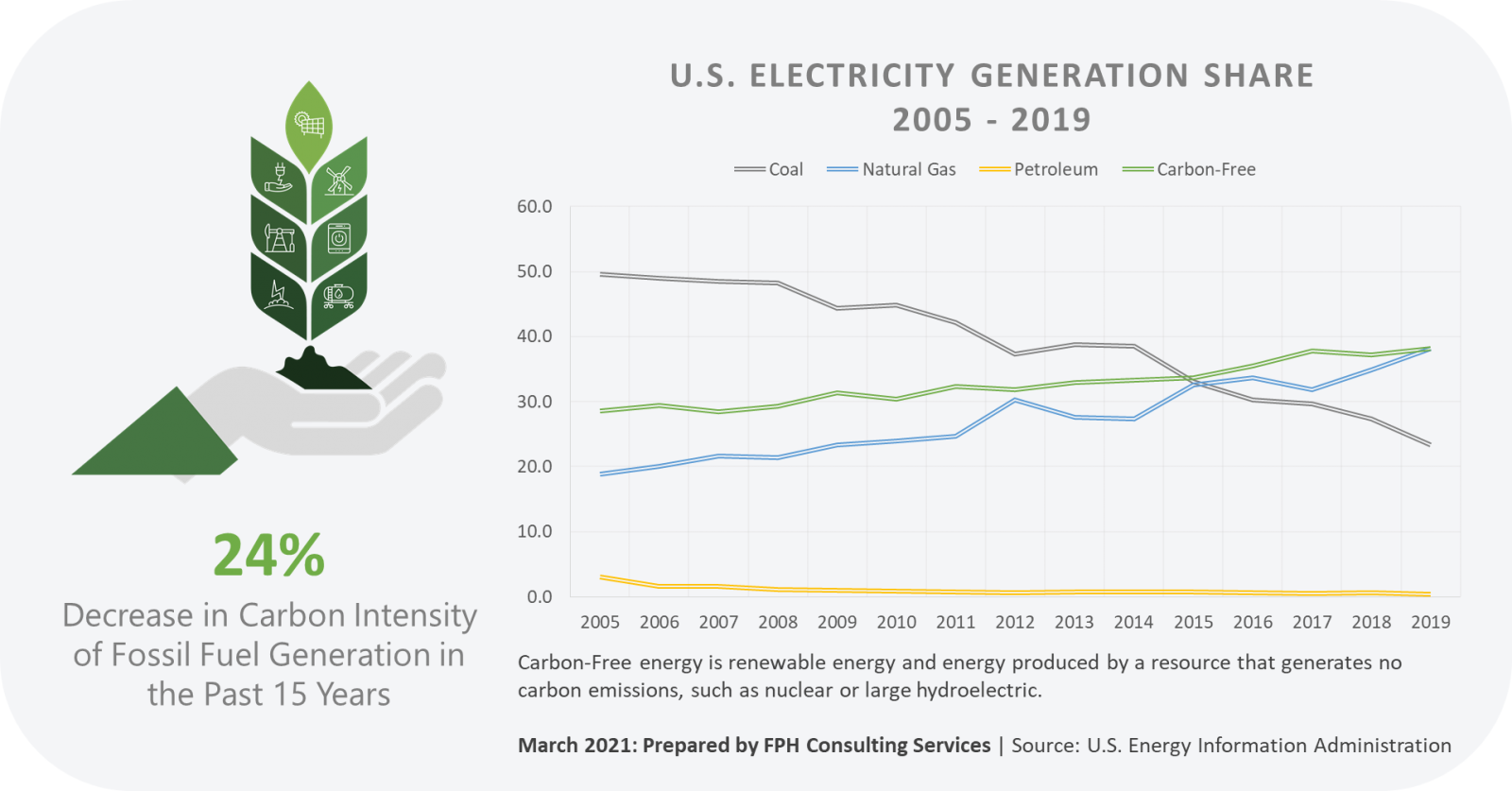 The reduction in carbon intensity of fossil fuel generation has played a substantial role in the energy-related CO2 emissions decline in the past 15 years.  As technological advancements continue in wind, solar, and hydro energy, emissions will continue to decrease.  The growth of renewable energy is exciting with wind reaching a significant milestone in the final months of 2020 when U.S. generation from wind turbines set daily and hourly records.

But will renewable energy growth be enough in the next 15 years to reliably power the nation’s grid? 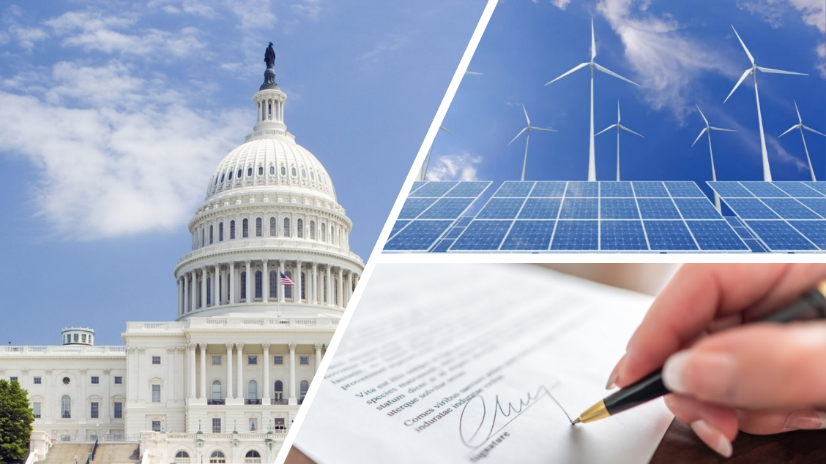 Despite a remarkable achievement for wind power in 2020, construction of wind turbines is expected to slow with the Production Tax Credit (PTC) set to expire at the end of 2024.  Grid-scale solar investment will also feel an impact as the Investment Tax Credit (ITC) percentage rolls back from 30% to 10% in 2023.   Financial incentives, like these, are highly effective tools to inspire utility investments in grid decarbonization.  The changes in these policies create uncertainty during a time of heightened electric reliability concerns from state commissions and consumers.

Meanwhile, demand for natural gas is expected to intensify following recent record-breaking throughput and will remain constant from now until 2050.  This brings into clearer focus the nation’s energy portfolio over the next 10 to 15 years.  S&P Global Market Intelligence helps to put this into perspective.  According to the highly respected data, research, and analytics provider, in order to achieve 100% clean electricity by 2035 it is estimated that 4.8 billion MWh of natural gas, coal and oil generation would theoretically need to be replaced by then.  With less than 40% of U.S. power generation from carbon-free sources today, capacity additions from solar, wind, nuclear, and hydro would need to increase 200% from their all-time peak capacity of 1.6 billion MWh in 2020.

The potential suspension of natural gas investments coupled with policy-driven shortfalls in renewable energy investments could leave millions of American households susceptible to power outages during peak demands and significantly increased prices.  Nearly 70% of ERCOT customers lost power during the catastrophic winter storm in February and wholesale electric prices jumped as high as $9,000 per MWh compared to the more typical $50 per MWh.

“Success is a journey, not a destination.  The doing is often more important than the outcome” – Arthur Ashe

When the late tennis great and humanitarian Arthur Ashe shared these insightful words some 30 years ago, he wasn’t likely reflecting on climate change solutions.  However, his words are indeed relevant here because as the world fixates on 2050 it is important to consider the pathway to get there.

In 2020, natural gas prices were the lowest they had been in decades.  The U.S. Energy Information Administration (EIA) projects only 0.5% annual growth in the residential price of natural gas from now until 2050.  According to the American Gas Association, the low cost of natural gas has saved families a total of $143 billion over 10 years and has led to $121 billion in savings for American businesses since 2009.  Natural gas is abundant, accessible, and affordable for all Americans.

Affordability is important as history has shown us that communities in low-income zip codes carry the heaviest economic burden during times of national policy transitions.  As a percentage of income, households that are classified as “low-income” pay up to three times more than the average household on home energy costs.  The benefits of decarbonization must reach these vulnerable communities as the transition occurs rather than after it happens.  From urban inner-cities to hard-to-reach rural areas, utilities and governments must coalesce around a balanced energy plan that leaves no one behind particularly coming out of the COVID-19 economic downturn.

Investing in natural gas infrastructure should not be a competing priority but instead an enabler for renewable energy growth and a cleaner future.

A climate-aware infrastructure bill is the right thing for America and now is the right time.  The route taken to 2050 must interconnect a clean electricity standard with energy equity, skill trade job creation [and retention], grid reliability, and consumer affordability.  Those priorities should not be competing.

Significant progress has been made over the past 15 years to replace aging gas infrastructure.  Natural gas utilities have accelerated replacement efforts which have largely been driven by safety and as modernization programs continue, these investments also build infrastructure that can carry hydrogen and renewable natural gas (RNG)that will further help reduce greenhouse gas emissions.  These renewable energy sources are currently undervalued but companies like Northwest Natural, Dominion Energy, and DTE are bringing RNG onto their systems and there are at least seven U.S. hydrogen projects being piloted by utilities in 2021.

Governments, utilities, and clean energy interest groups must work together to embrace inclusive ideas to optimize natural gas rather than immediate shift away from it.  An agenda to address climate change that advances energy equity should include natural gas given its reliability, safety, and affordability.  Such an agenda may not explicitly exist today but with forward-thinking bipartisan leadership and science, such a plan is possible.

About the Author: Charles Crews is a utility executive and management consultant who helps clients develop operations management and continuous improvement strategies.  Charles has spent the past three decades working in the utility industry in engineering, front-line leadership, and executive management positions including his last role as vice president for one of the nation’s largest investor-owned utilities.  Follow him here at LinkedIn.