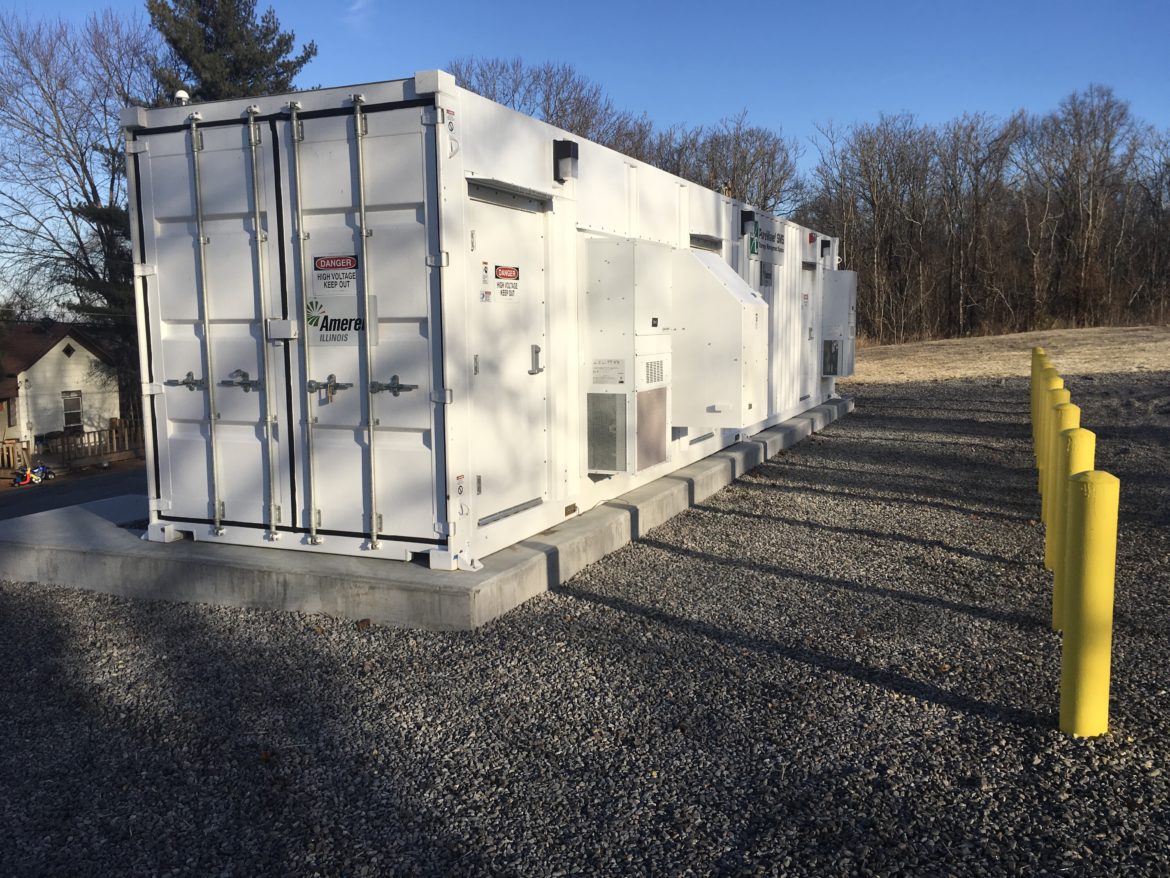 The Thebes battery and its equipment are housed inside a structure approximately the size of a shipping container. Photo Credit: Ameren Illinois / Courtesy

The battery system in the small, rural town of Thebes allows Ameren Illinois more time to complete repairs in a “geographically challenging area.”

As utilities around the country plan for more energy storage on the grid, a battery system in rural Illinois that’s been up and running since 2017 can provide some lessons.

Thebes, Illinois, is in the far southwest corner of the state, wedged between the Mississippi River and rugged hillsides — geography that makes it difficult for Ameren Illinois to provide reliable electric service for the town’s roughly 330 residents.

The solution was an innovative solar battery system, which has dramatically reduced both the number and duration of outages.

Before the system was put into place in Thebes, crews of workers would have to navigate the hilly terrain to restore power, resulting in much lengthier outages, according to Rod Hilburn, manager for Ameren’s Technology Applications Center.

“The folks in the town of Thebes are served out of a substation called the Gale. You’ve got the Mark Twain National Forest. You’ve got lots of trees. You have flooding from the rivers that are down there,” Hilburn said. “And so our reliability for these customers was not real good. We were looking for a solution to be able to improve upon the reliability for these customers. We executed a number of different things.”

With the battery system in place, residents of Thebes enjoy much more reliable electric service. The battery system was especially beneficial in minimizing outages in Thebes during a recent period of rough weather earlier this year, according to Brian Bretsch, communications executive for Ameren Illinois.

“We had a weather-related event in Thebes and the batteries were utilized for the first time ever for these customers,” Bretsch said. “When the outage happened, the batteries kicked in and worked. [There was] no long-term outage for our customers.”

The backup system, including a $1.4 million battery, was initially installed in 2017. The utility made adjustments in 2019 to allow the energy storage system to work with other sophisticated controls to automatically restore service almost as soon as a power outage occurs. Refinements to the system are ongoing, Hilburn said. 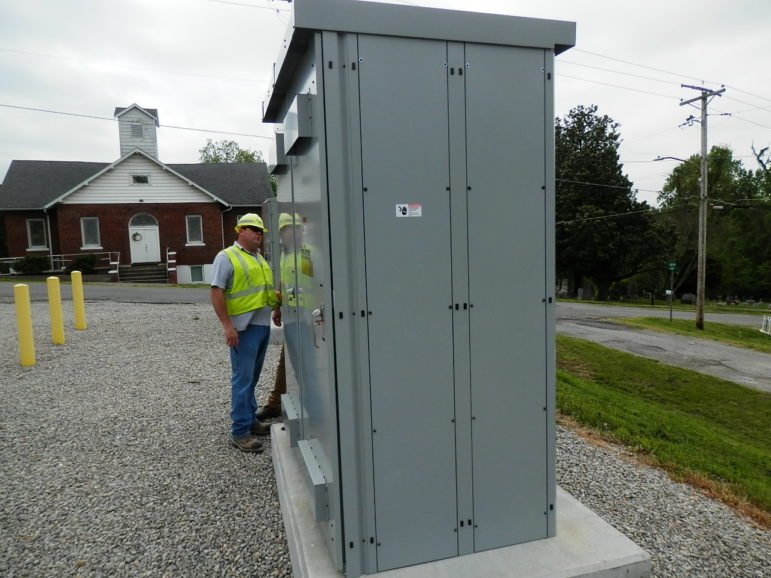 The Thebes system is the second endeavor for Ameren Illinois to engage or use a lithium-ion battery system, which the utility continues to modify and refine. The other battery system operated by Ameren is located within a smart grid testing facility in Champaign and is smaller than the battery setup in Thebes. The recloser for the Thebes system is basically an automated switch that opens and closes repeatedly, based on signals from control relays, according to Hilburn.

“We placed this recloser to allow us to isolate back towards the substation so that we could actually engage the battery after opening that switch, in order to bring power from the battery, discharge the battery into the system,” Hilburn said. The battery then “energizes all of the wires that are in the town of Thebes itself in order to provide power to those customers.”

The battery is located in one room approximately the size of a shipping container — 40 feet long, 8 feet wide, and 8 to 10 feet tall — with heating and air conditioning to keep the battery at its preferred temperature of about 75 degrees. A second room houses inverters that enable the battery to be charged and discharged. The other equipment is in a separate building in case of fire, Hilburn said.

The system can provide a megawatt-hour of power when the battery is fully charged. It’s essentially a greatly upsized uninterruptable power system, or UPS, according to Hilburn.

“If you have a UPS in your house that’s basically protecting your computer, that UPS automatically turns on whenever you lose power, and it gives you a certain amount of time to save the information that you have in your files, prior to the power completely going out,” Hilburn explained. “Essentially this is similar to that except it’s a lot bigger. It’s actually providing energy to customers, and they can use power however they wish.

“In the most recent event we had, we basically ran those customers for about two, two and a half hours. The battery had sufficient power to keep them in service until repairs can be made to the upstream devices.”

However, once repairs were completed, a second outage of a few minutes was necessary to perform the switching sequence to return customers to the normal power source, Hilburn said.

“We don’t have the methodology in place to actually seamlessly transition them back to the normal source,” Hilburn explained.

The battery system represents a means to improve energy reliability in a more timely and cost-efficient manner while the utility continues to explore strategies for providing reliable service to the community, Hilburn said.

“Another way to solve this would be to build infrastructure from an alternate source,” Hilburn said. “That would be very costly. It would be building overhead lines in the same geographically challenging area. [This is] not to say that we’re not willing to do that, because we are. … We’re continuing to look for ways to improve reliability to our customers.”

The battery system “was the quickest thing that we could do, that we were able to come up with,” Hilburn added. “And quite honestly, this was kind of an experiment so to speak, because you’re basically taking a battery system which is designed to be able to provide power to customers, but you’re ‘blank starting’ those customers. So essentially, you’re starting from nothing. The customers don’t have any power.”

In the meantime, along with providing an immediate solution to frequent outages, refining the battery system is an ongoing process, Hilburn said.

“We’re still learning how to use, how to change the control settings, how to manipulate the battery, so that it’s even more reliable. We’re going to continue to work on those types of activities,” Hilburn said.

“Eventually, I think energy storage systems will become more prevalent. As we move to the future, battery systems can also be used to help smooth the power output that you get from renewables like wind and solar. And so in the future, we’ll be using probably combinations of those to help us to manage our distribution system.”