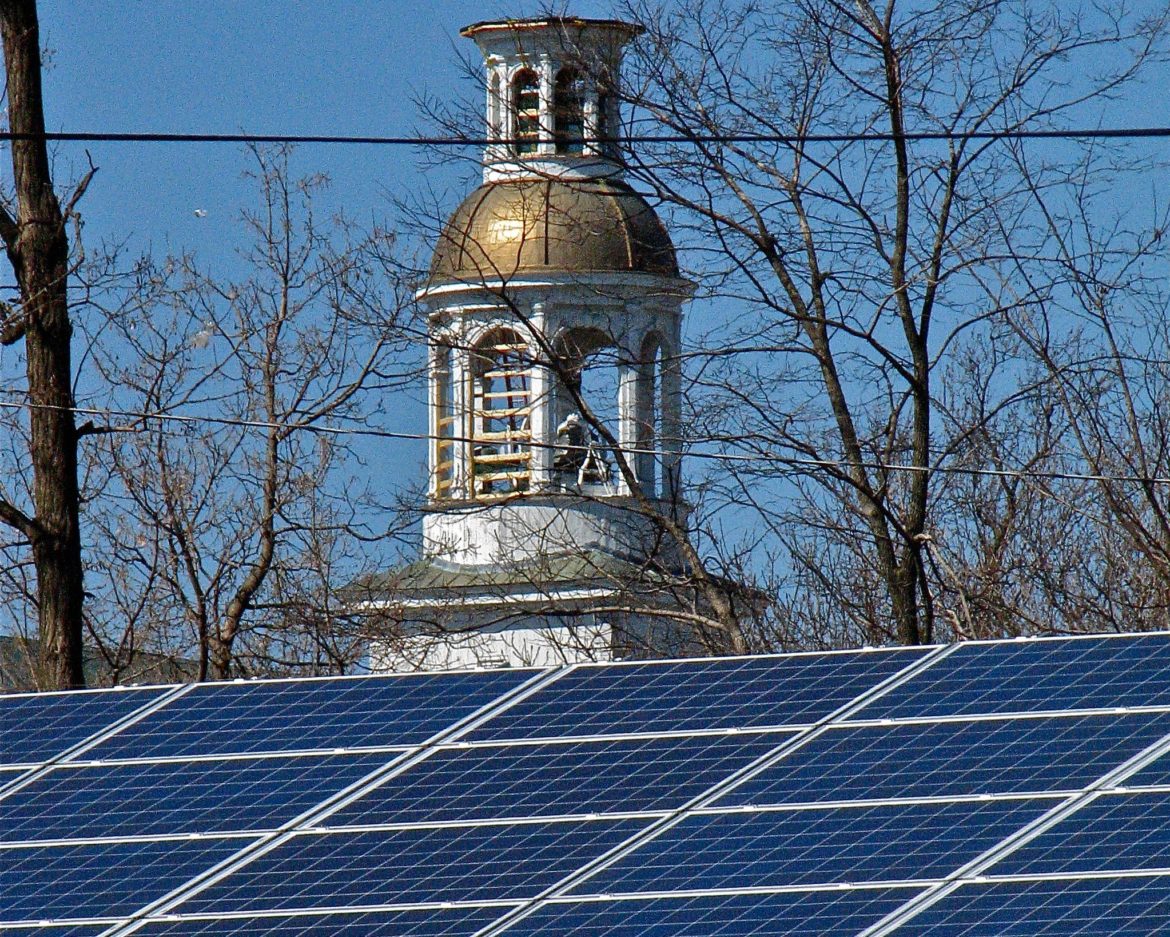 The steeple of St. Joseph's Church in Burlington is seen over an array of solar panels. The city has the highest installed solar capacity per resident of any city in the region. Photo Credit: Don Shall / Flickr / Creative Commons

A developer says that changes to state net metering and federal tax credits will make projects harder to put together without integrating storage.

A new 150-kilowatt solar array atop Burlington, Vermont’s YMCA is the latest prominent addition to one of New England’s top solar cities.

The project’s developer, however, warns that the industry may be losing momentum as state and federal policy support continues to shrink.

Burlington has the highest installed solar capacity per resident of any city in the region, and it ranked fourth nationally last year, according to Environment America. The city boasts more than 8 megawatts of solar, the vast majority of which was installed in the last decade.

That growth was driven in large part by the state’s historically generous net metering policies, which are now in flux as state officials reassess to make sure ratepayers aren’t unfairly subsidizing passive-income projects for wealthy investors.

Chad Farrell, founder and CEO of Encore Renewables, which built the YMCA project, said he worries Vermont is “in a state of correction” after its decade-long solar boom. The rates paid for utility customers’ surplus solar power have been stepped down since 2018, with more reductions possible.

That combined with transmission constraints, an abundance of generation in some places, and the tapering off of federal solar tax credits all point to a new, slower development phase, he thinks.

The YMCA was able to make the numbers work with help from an investor that will own the project for about seven years to capitalize on tax credits.

“This is no small feat. The building itself is something the community has been contemplating at least since the year 2000,” said Kyle Dodson, president and CEO of the Greater Burlington YMCA. The solar array had been one of several potential uses for the rooftop; event space or even parking spaces were others.

Encore Renewables brought in the investor, a small initiative called Golden Sail. Construction began in May, when the facility was closed to the public due to the pandemic, allowing for less disruption, Dodson said.

Golden Sail is a project of Sarah Valdovinos, the New York-based co-founder of renewable energy project developer Walden Green Energy. Valdovinos views this both as an investment with attractive returns and a way to reduce greenhouse gas emissions. “I think you can find bottom-line value [through investment] as well as move forward on a set of values that you may have,” she said.

The YMCA is Valdovinos’ third investment in Vermont, and the third with Encore. Given the Y’s community-building mission, she views this as an environmental as well as a social investment. “That piece of it is a very important value added to the project,” she said.

“From early on, I, and we … have realized that it’s all about financing,” Farrell said. Particularly for a nonprofit, donation-driven institution like the Y, this model offers the organization an opportunity to save money.

Farrell expects the Y to see a modest reduction in its electric bills right away. After about seven years (due to tax rules), a donor could purchase the array and donate it to the Y, which could then save about $35,000 a year, or 25% of the facility’s annual electric costs, Farrell estimated.

Burlington Electric Department general manager Darren Springer said the federal tax credit, in addition to Vermont’s net metering program, has helped solar grow in Burlington for the past decade. “Happily, solar is becoming more and more common in projects, whether it’s a new construction project or whether it’s adding panels to an existing rooftop,” he said.

“I would say that, from a policy standpoint, the biggest thing that would be a great stabilizer would be the federal tax credits,” Springer said. “In my view, we have federal tax credits and subsidies for fossil fuels that have been on the books for decades … and they don’t expire.”

If the federal tax credit isn’t revived and Vermont’s net metering trends continue, Farrell thinks the industry will have to look to storage as a way to help improve project economics.

“We know that the future of solar needs to include storage,” he said. Customers won’t be able to maximize the power they get from their solar arrays without it, he said, noting that northern Vermont has seen generation curtailment because surplus renewable generation has nowhere to go.

With battery prices beginning to fall, new incentive programs launching, and utilities now looking at storage as a resource, he said, “the energy storage revolution is here.”