Critics say the Democrat has done too little to address coal ash pollution, but that could change in 2019.

North Carolina Gov. Roy Cooper won his election in 2016 pledging to protect the state’s environment and drinking water from coal ash. This is the year the Democrat’s promise will be put to the test.

Duke Energy, the statewide utility that generates a third of its electricity from coal, owns 14 ash dumps that are perched near major rivers and leaking contaminants into the groundwater below.

Before Cooper took office, the company was already legally bound to close these sites and excavate eight of them. What happens to the other six is now up to his administration, in a decision anticipated before the end of 2019.

“This is the first big opportunity for the Cooper administration to make good on his commitments to coal ash cleanup,” said Dave Rogers, the Sierra Club’s Beyond Coal campaign representative in the Carolinas.

Cooper officials are starting to air cleanup options, this month visiting six communities around the state for an initial round of public meetings.

Duke proposes leaving at least some ash in unlined pits at all the sites in question, while environmental advocates, local communities, and many scientists say the toxic waste should be dug up and moved away from water supplies and into dry, lined landfills.

“This is the turning point,” said Ridge Graham, field coordinator for the Boone-based advocacy group Appalachian Voices. It’s a chance for the Cooper administration, he said, “to be different from the previous administration and not just go along with what Duke asks.” 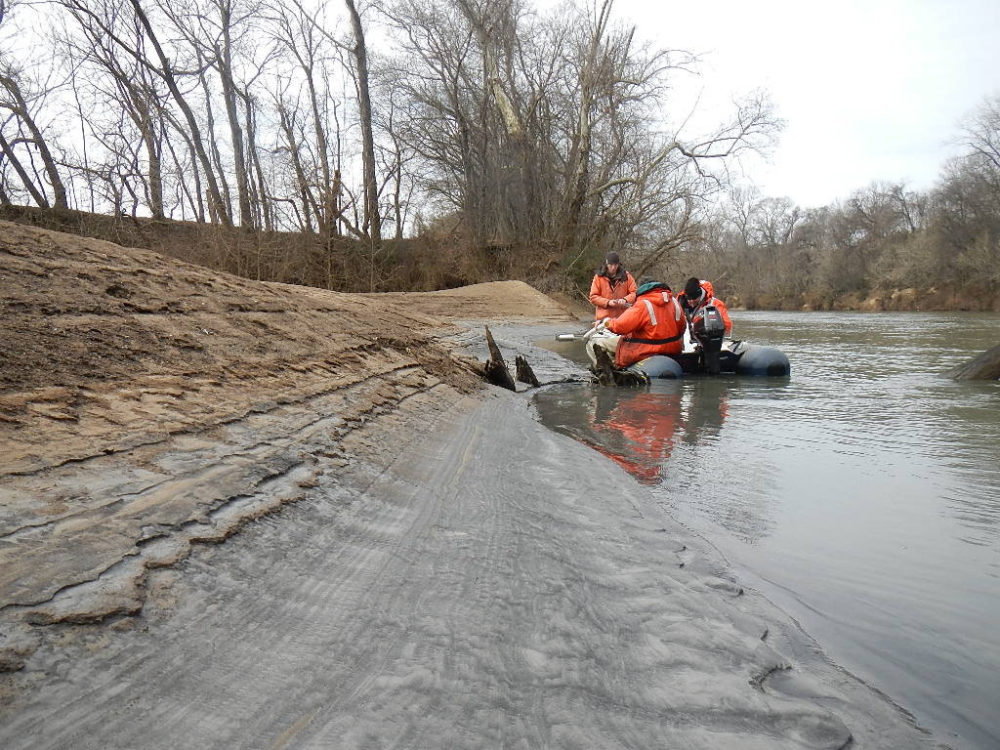 U.S. Fish and Wildlife Service responders take core samples of the Dan River after a 2014 coal ash spill coated 70 miles of the river with toxic sludge.

From catastrophe to campaign issue

Experts have long warned about the dangers of coal ash, a coal-combustion byproduct that contains carcinogens like lead, mercury, and other heavy metals. North Carolina citizen groups first filed suit against Duke for violating the Clean Water Act in 2013, alleging the company’s unlined ponds of ash mixed with water were leaking into the groundwater table.

Yet coal ash didn’t become a public flashpoint in the state until the following year, when two pipes failed at a coal ash pond near the Virginia border, coating 70 miles of the Dan River with toxic sludge.

In response — and as the citizen suits wound their way through the courts — the GOP-led Legislature passed a measure in the summer of 2014 to require four sites, including Dan River, to be excavated. The law tasked regulators with testing nearby wells, evaluating risk levels, and devising cleanup plans for the other dumps.

Environmental advocates worried the law might undermine their legal claims and said the law didn’t go far enough. But most of their criticism soon trained on then-Gov. Pat McCrory, a Republican who had worked for Duke for 28 years.

The complaints came to a head in 2016 as McCrory sought his second term. In March, his administration abruptly rescinded a “do-not-drink” notice it had issued a year earlier to hundreds of well owners near coal ash ponds. Court depositions released in May claimed the governor’s office urged public health officials to downplay the risks to water supplies. The state epidemiologist resigned amid the fallout.

That same May, the McCrory administration announced that based on the criteria in the 2014 law, all of Duke’s coal ash dumps posed enough risk to require excavation. In the same breath, it said it would push for a change in the statute to allow a reevaluation of the risk findings in 18 months. Advocates balked.

“While it may appear the department will require full cleanup of all [coal ash] ponds,” said Amy Adams, North Carolina program manager with Appalachian Voices, in a prepared statement at the time, “that’s secondary to its plan to get the legislature to change the coal ash law in ways that would make today’s cleanup rankings meaningless.”

In July, McCrory signed a new law that effectively deemed seven dumpsites as “low-risk,” pushing back their cleanup deadlines and creating an opening for ash to remain in place rather than be excavated. (In line with later court settlements, the law also classified three additional sites as “intermediate risk,” requiring their ash to be dug up and recycled.)

Cooper seized on the coal ash controversy on the campaign trail. In ads, he dubbed McCrory, “the Duke Energy Governor.” At the final gubernatorial debate, he highlighted the “do not drink” notice dispute.

“What we need is public officials who are going to listen to scientists, who are going to believe what they say, who act on that, who use data and facts and don’t let their political ideology rule the day,” Cooper said.

McCrory shot back on the debate stage and elsewhere, pointing to the parts of the law that required Duke to offer replacement water supplies for neighbors of coal ash ponds, and noting that Cooper had done nothing to address coal ash during his four terms as attorney general.

Cooper’s campaign ads, McCrory said during the debate, implied “coal ash is on my hands, as though I did the coal ash spill — which is totally ridiculous.”

Ultimately, Cooper edged out McCrory in the election by the slimmest of margins. But he gave no specific mention of coal ash in either his inaugural or State of the State addresses and has been relatively quiet on the topic since.

What’s more, Cooper officials came under fire last fall for their handling of two coal ash spills outside Wilmington and Goldsboro in the wake of Hurricane Florence. They were too slow to arrive at the scene, critics said, and downplayed the risk to water supplies. They had no plan to assess any long-term damage by testing the sediment in river and lake beds.

“They’re failing to do their job,” Matthew Starr, the Upper Neuse Riverkeeper, said at the time of the spills.

A map shows the 14 coal ash sites in North Carolina. Click on each site to view its cleanup plan, timeline, and the amount of ash remaining as of Sept. 30, 2018.