WRITTEN BY David Thill5 hours ago 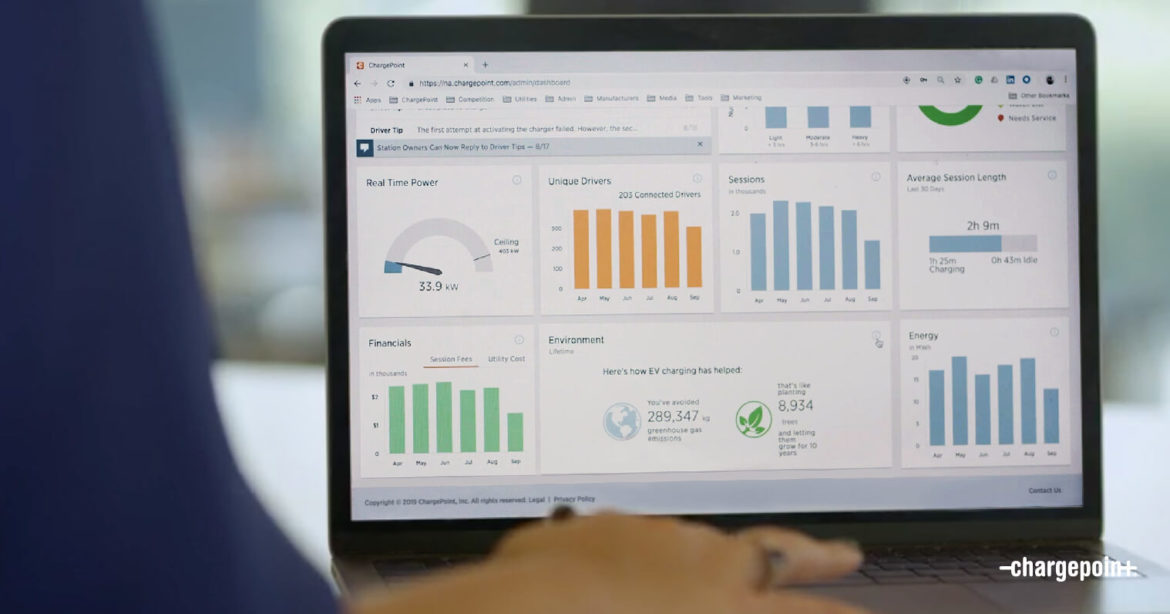 ChargePoint's "NOS," the company's system for charging station owners and hosts to use when managing the chargers at their sites.

Several utilities are testing new programs and technology to encourage drivers to fill up batteries during off-peak hours.

Midwest utilities’ plans for preventing electric vehicles from overwhelming the power grid are expanding beyond discounted rates for overnight charging.

Time-of-use rates — still in the pilot phase for most utilities — are a big part of the strategy for keeping too many drivers from plugging in during peak hours.

But with a potential electric vehicle boom on the horizon, more programs and technologies are being tested to help manage the expected load growth.

Known as managed charging or smart charging, the terms broadly refer to any practices and programs to encourage responsible charging behavior. Smartphone apps promise to make it easier for utility customers to choose when they charge, while new charging station technology lets utilities take charge — with customer consent — to manage when vehicles charge.

“We’re in the very earliest days of managed charging technology, and it will only get more sophisticated,” said Erika Myers, principal of transportation electrification at the Smart Electric Power Alliance and the author of a recentreport on managed charging. “The most critical thing as an industry we need to do next is quantify the benefits and the costs of managed charging to enhance [the] business case.”

A report released this year by the Illinois Citizens Utility Board showed that between distribution system revenue, energy market savings and capacity market savings, the state could gain total value of $469 million by 2030 under a modest expansion of electric vehicles (about 690,000 on the road) and $2.65 billion with a stronger penetration of electric vehicles (about 2.2 million) — if charging is optimized so it takes place overnight.

The report made several recommendations, including implementing time-of-use electric rates specifically for electric vehicles (rather than entire households); developing apps for customers to operate charging from their smartphones based on price signals and current fuel mix on the system; and developing a managed charging pilot, something power providers throughout the country are trying. In her own report, Myers identified 38 such programs in various stages of development.

Utilities like PG&E and Avista on the West Coast have already tried small pilots, while in the Midwest, several utilities are in the early stages of their own, and transportation advocates hope to see more efforts soon.

Managed charging can be a broad term, but a key element is often that it allows customers to operate their charger from their smartphone and allows them to take part in utility aggregation programs.

The JuiceNet software from Enel X, formerly eMotorWerks, is one example. On the residential side, customers can use an app to schedule their car’s charging or set the power level, said Preston Roper, general manager of Enel X North America. The JuiceNet Green software, sold as a $50 add-on to the charger, operates in a localized real-time network so customers can schedule charging for when renewable energy is most available where they live.

The company also works with utilities, including Xcel in Minnesota and the California-based Sonoma Clean Power community choice aggregator, to implement programs in which customers’ chargers can be grouped together and managed either by Enel X or the utility itself, with the option for customers to override. An Enel X partnership with Honda pairs the software with Honda’s Fit EV model. Both that program and the Sonoma program also offer customers monetary rewards for participating in demand response events.

While customer uptake of the chargers is picking up as more electric vehicle models become available, Roper views utility and auto manufacturer partnerships as an important way to boost the technology’s reach.

He added that new capabilities will become available for chargers installed in workplaces, apartment buildings and commercial sites. “If you’re going to put charging in, you might as well make it smart charging,” he said, “especially if the product is already at a decent price point.”

The case for utility pilots

While customers can benefit from smart charging on an individual level, the entire grid can benefit when utilities aggregate electric vehicle load and manage it efficiently. Often, this begins with a small-scale pilot.

“I think a managed charging pilot is a good start,” said Mark Nabong, a senior attorney at the Natural Resources Defense Council who specializes in transportation. Utilities are key for implementing these programs and stoking customer awareness, he said, and auto manufacturers and charging installers also have to be involved.

Managed charging is usually part of broader charging pilots. Midwest programs are still early on. AEP Ohio’s, for example, was approved last year by the state’s regulatory commission, which allocated $10 million in rebates for chargers at workplaces, multi-unit residences and other public locations.

“It’s early days for us,” said Sherry Hubbard, a research and development coordinator at AEP Ohio. The utility has so far approved applications for about 120 of the 375 chargers allowed for through the program, and Hubbard said most of her focus has been on helping people apply. But once it’s in full swing, the data her team collects will help them determine grid impact and what the opportunities are for managed charging.

Data gathered through these pilots is critical for helping utilities figure out how to manage grid load, said Mike Waters, director of utility solutions at ChargePoint charging network, one of AEP’s partners on its pilot.

ChargePoint has several early-stage pilots in the Midwest besides AEP, including with Madison Gas and Electric in Wisconsin, DTE and Consumers Energy in Michigan, and Xcel in Minnesota.

Additionally, Waters said, ChargePoint partners with distributed energy resource management systems — also referred to as DERMS. These systems serve as platforms that accommodate multiple charging companies, so customers have more choice in which charger they use.

Vermont-based Green Mountain Power had a two-year pilot using the Virtual Peaker DERMS software, one of ChargePoint’s partners, in which the utility offered discounted charging for customers who participated in demand response events controlled by the utility.

While spokespeople from both of Illinois’ regulated utilities, ComEd and Ameren, said officials are either implementing or considering electric vehicle charging programs, they were able to offer little specific information at this point. But “Illinois has a chance to be a leader in these technologies,” Nabong said.

Customers need to be able to trust their vehicle will be charged when they need to use it before they allow a utility to control it, said Myers, at SEPA. Implementing more passive programs, like time-based electric rates and other incentives to encourage efficient customer charging behavior, can be an effective step to build trust and encourage uptake of smart charging technology in the future.

“I think it would be really helpful to have more data on the subject,” said Jane McCurry, a program manager at Renew Wisconsin, a renewable energy advocacy group. “The more pilots we have, the more we’ll understand what sort of managed charging customers will accept.”

McCurry pointed out that while best practices now often promote overnight charging, those practices may change in the next 10 to 20 years to account for renewables, whether it means more afternoon charging to use excess solar power or morning charging to use wind.

She added that managed charging could be useful for making vehicle-to-grid integration — when electric vehicles actually send power back to the grid — a reality. “Right now, [vehicle-to-grid] sounds far away for a lot of stakeholders,” she said. “Managed charging is a step in that direction.”

Definitely agree that smart charging is essential to the new world of EVs. What's interesting to think about is that these charging issues utilities are planning for are not what was holding EVs back in the first place, so if the EV tech had been ready for prime time in the 90's would the utility sector have been ready for it in a pre-IoT era?