Will Bennet and Hickenlooper Speak Out On Federal Lands Ban?

It’s been weeks since the Biden administration temporarily removed the authority of approving permits from career Bureau of Land Management staffers here in Colorado and placed an indefinite moratorium on oil and natural gas leasing on federal lands.

There has since been swift and critical reaction around the country to these orders that will cost jobs and reduce tax revenue. EE News reports that “Dems from oil-producing [New Mexico] grapple with Biden moratorium,” while Louisiana’s Republican Congressmen are opposed to the rule and the state’s Democratic governor “is concerned about any moratorium that would affect the Gulf.” Likewise, industry and elected leaders in Texas, Oklahoma, and Wyoming have all warned against this administration’s abrupt decision aimed at undercutting American-made energy.

In Colorado, however, U.S. Sens. Michael Bennet and John Hickenlooper have remained silent on the administration’s actions. Both Bennet and Hickenlooper have supported the American oil and natural gas industry throughout the course of their careers in Democratic politics, but now that a Democratic president is occupying the White House and turning sharply against the industry, neither senator has spoken up on the issue.

The key question now is: Will Bennet and Hickenlooper state whether they support or oppose the Biden Administration’s order to suspend new leasing on federal lands?

Plenty of Talk on Energy and Climate, But None on Oil and Natural Gas

Bennet, in particular, has touted energy and climate issues since Biden took office. In just the past few weeks, his office has sent out press releases on the Paris Agreement, clean energy, outdoor recreation, and a “Western Climate Resilience Framework,” but none of these address the administration’s federal lands ban.

Both Senators also voted in opposition of an amendment on the Senate floor last week that would have affirmed the U.S. government’s support for the Keystone XL Pipeline that Biden recently cancelled. That vote was a flip-flop for Bennet who, as the Washington Examiner noted, “as recently as the 2020 campaign trail, he found himself defending his vote in 2015 to authorize the project.”

There was even a joint letter sent from Bennet and Hickenlooper to President Biden urging him to support a “fully functioning Bureau of Land Management (BLM) headquarters in Grand Junction, Colorado.” BLM recently moved its headquarters from Washington, D.C. to Grand Junction, CO to be closer to where more than 99 percent of U.S. energy development on federal lands occurs. 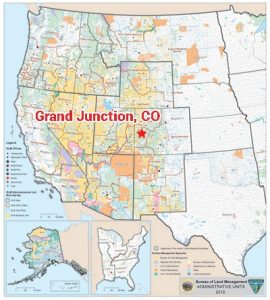 Notably, not mentioned in that letter was the crucial role that BLM plays in overseeing oil and natural gas leasing and permitting on federal lands, ignoring the elephant in the room. Nor did they include the economic impact this development has in the state.

Hickenlooper also landed a spot on the Senate Energy & Natural Resources Committee, where he’ll get the chance to pose questions to Interior Secretary Nominee Deb Haaland during her confirmation hearing. Will Hickenlooper press Haaland on the how the administration’s ban affects Colorado?

Production on Federal Lands Crucial for Economy and Revenues

Most of the production on federal lands in Colorado takes place on the Western Slope where the energy sector provides thousands of jobs and supports countless other small business. As Energy In Depth noted last week, the moratorium will hurt companies around the nation and in Colorado. Grand Junction Area Chamber’s President and CEO Diane Schwenke recently spoke of the workers who will be impacted, especially those already struggling due to the pandemic. Schwenke said that a federal lands ban “simply isn’t necessary and will hurt my small businesses that rely on the energy sector.”

Colorado State Sen. Bob Rankin, who represents Garfield County, one of the state’s highest producing natural gas areas, said that layoffs are already happening, and it will get worse unless the ban is reversed:

“I believe the gas industry in Western Colorado may just collapse. These are small companies. Many of them will just cease, go bankrupt, go out of business.”

Ironically, the federal government’s decision to enact this moratorium will have a big impact on the revenues it receives. Royalties, taxes, fees, etc. from production on federal lands generated $9.5 billion in revenue in 2019 and $121 million for Colorado, according to the Dept. of Interior.

It will also severely undermine local public services in Colorado. Garfield County Commissioner Tom Jankovsky warned that revenue from federal land leases will shrink from $3 million in 2018 to approximately $600,000 this year, saying:

“We’ll have to cut services because we just don’t have the funds.”

It’s clear that responsible oil and natural gas development on federal lands is crucial to a strong American energy sector and for funding vital public services. The administration’s recent order would undercut that progress and the issue has a specific importance for Colorado as BLM relocates its headquarters to Grand Junction.

While Sens. Bennet and Hickenlooper have been quiet on the order so far, they’re support for oil and natural gas in the past should mean they are studying this issue closely. So, will they support or oppose the Biden Administration’s order to suspend new leasing on federal lands?

The post Will Bennet and Hickenlooper Speak Out On Federal Lands Ban? appeared first on .