The best perfoming energy stocks over the past five years were all renewables-focused. Companies like Enel, Iberdrola, NextEra and Orsted have significantly outperformed the Big Oil companies.

What’s interesting though is that the worst performing oil and gas companies were also those most aggressive about decarbonisation, namely Total, Shell, BP, Eni and Repsol. It begs the question, should they be spinning off their renewables divisions?

The heart of the matter is the difference between renewable and oil and gas companies. Renewables projects are generally low risk, low return and debt financed, demanding a low cost of capital and a very low cost base. Investors are comfortable with a secure but low yield and a focus on growth.

As a result, renewable and oil & gas businesses are likely to be valued completely differently. In addition, most investors want to invest in ‘pure play’ companies as it allows them to better manage their own risk.

Some investors will not want the higher risk exposure to oil & gas and hence will invest in renewables-focused companies such as Iberdrola. In contrast, some investors, realising the continued importance of oil & gas for at least the next two decades, will want exposure to the upside potential of the oil & gas business; but will place little value on the contributions from the renewables business until they are large enough to act as a true hedge to the risks related to the fossil-fuel investment.

This problem is compounded by the recent rise in ESG [environmental, social and governance, ie, socially responsible] investing, which increasingly prohibits significant numbers of investors from taking any exposure to oil & gas at all.

While some will rightly ask whether this will actually have any effect on reducing European fossil-fuel consumption, increasing numbers of investors are simply blocked from getting any exposure to oil & gas production and that excludes them from accessing the renewables businesses within them.

The solution could be to split these oil companies into two distinct businesses — a low-return growth business focused on renewables and electrification and an oil & gas business focussed on cash generation from the highest value oil & gas projects, as well as transition technologies such as carbon sequestration and blue hydrogen projects.

The legacy business would still maintain exposure to renewables and new energy through its shareholding in it. In fact, it could alter this shareholding over time by investing or divesting in it as a source of liquidity.

The additional advantage, though controversial, is that it would allow two different cultures and brands to emerge better suited to the different business models and customers. The counter argument would be that it prevents the companies selling integrated natural gas and renewables offers, but customers increasingly are turning away from natural gas to renewables and green hydrogen, rather looking to procure both at the same time.

There is some precedent for splitting. Over a decade ago utilities like Enel, EDP, EDF and Iberdrola all spun out their renewable divisions, which gave them the freedom to develop separate cultures and take on new markets. Interestingly all of them, except EDP Renewables, have been bought back into the parent companies in recent years, and the leadership of many of the parent companies today are from those renewable businesses.

The other possibility is to do what Dong Energy did. It was founded in 1972 to manage Danish oil and gas resources in the North Sea. These were sold and the capital was focused on one sector: offshore wind. Today it is known as Orsted, a world leader in wind and the best performing energy stock globally last year, up 40%.

So maybe the companies should leave renewables entirely and instead focus on being a leader in an emerging sector, the hard-to-abate sectors such as the decarbonisation of industry, aviation or shipping or look to direct-air capture or energy efficiency?

Or maybe they should move into mining, noting that the decarbonisation of our world is going to cause a major move away from fossil fuels to one based on minerals such as lithium, cobalt, nickel and rare earths, as well as aluminium, copper, silver, zinc and manganese, all of which are going to see increasing demand every year as we electrify the world. Time will tell, but we believe we will see very soon Big Oil spinning off and launching IPOs of their renewables and new-energy businesses.

By Gerard Reid and Andrew Symes

Really interesting take, Gerard-- especially looking at the difference in what investors may want. I suppose those who want balance can still invest in both separately, but make up their mind about the relative weights they are given in their portfolio?

The additional advantage, though controversial, is that it would allow two different cultures and brands to emerge better suited to the different business models and customers.

I wonder if this is an impediment, though, as no doubt at least part of the motivation of the oil majors is that they want the public-facing image of being 'in' on the clean energy future while still being able to profit off of the 20th century energy dominance of fossil fuels. By separating them out, are they risking losing that 'feel good' green PR?

They are but from an investor point of view the market does not believe that they are changing or does not want them to change...

Sorry, I don't agree. Big oil has cash, cash can drive new energy opportunities. They have large R&D organizations and land ownership, both critical for new energy improvements and installations. They have diplomatic level relationships that most companies don't have - meaning they can access senior level government officials for discussion on new energy.

But so can any utility?

I agree with Matt. I would never invest in an Oil company EVen if they were developing some renewables. An example is BP who also claims to be doing Solar. I only buy pure play companies that are doing green clean things like Tesla and Sunpower. I will not buy stock in BP , Shell, Exxon or even GM. Matt knows how most investors think.

Gerard, their renewables entities are likely already subsidiaries of parent-holding companies. And they're only profitable because green activists are extremely eager to believe the unending stream of hype coming from their marketing departments.
You might be surprised to learn, for example, that 74% of Next Era's power mix comes from burning natural gas - like we did in a former era.
Though only 2% of it is generated by solar PV panels, it's worth every penny in marketing potential.

Bob, all the growth in Next Era is because of renewables and related to that grid and that is why the share price is up where it is...

Gerard, you confuse growth with market capitalization - what all of a company's stock is worth at a given point in time.

In January, NextEra's market cap briefly exceeded that of Exxon-Mobil, leading excitable renewables advocates to crow about the triumph of wind and solar over oil and gas.

Since, its market cap continues to plummet, as investors realize all of Biden's good intentions can't make a silk purse out of a sow's ear. 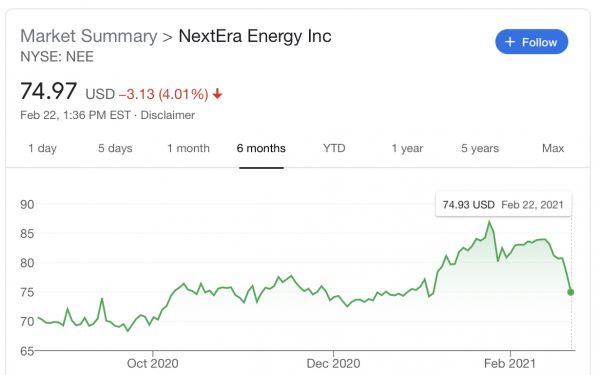