What’s behind the rise in US gas production? 🤔

What’s behind the rise in US shale gas production? Since the pandemic, US gas and oil production have taken different trajectories: oil has not fully recovered, but gas is setting fresh highs. Here at Novi, we get asked questions about these types of trends all the time. Of course the first-order answer to “Why is gas production rising” is simply “prices are up!!!!”, but there is a lot of nuance behind that. Different factors contributing to that rise could include increased activity, oil wells turning gassier, or improvements in well productivity.

In this post, we will take a look at those different factors, along with an exploration of where this increase is coming from.

Appalachia, and especially the Marcellus, remains the king of US shale gas production at ~35 bcf/d, a tremendous amount. Within Appalachia, operators have been adding more production in the southwestern part of the play, rather than the bone dry gas area in Northeastern Pennsylvania. On a percentage basis, growth has been lowest in Appalachia, but it has still added over 3 bcf/d since the pandemic began. Gas production has exploded higher in the Haynesville, benefitting from great differentials with access to the gulf coast gas network and its LNG export facilities.

But the second-biggest shale gas producing basin in the US isn’t the Haynesville – it’s the Permian, where associated gas volumes are nearing 18 bcf/d. With pre-pandemic volumes just below 15 bcf/d, the Permian has been responsible for around the same amount of gas production growth as Appalachia, which underscores how important oil activity levels are for US gas production.

GORs in the Eagle Ford and Permian

Are wells becoming gassier in the Permian and Eagle Ford? On average, the Permian has been pretty consistent over the last few years, but wells in the Eagle Ford have been producing more and more gas recently.

In the Eagle Ford, operators have been drilling different parts of the field over the last two years compared to pre-COVID times. In March 2020, there were 19 rigs in Karnes County, where you can find the most productive wells in the oil window but only 3 rigs in Webb County, where most of the production is dry gas. But by August of 2022, 20 rigs were running in Webb with only 10 in Karnes.

Most unconventional plays in the US do not have the full range of fluid windows like the Eagle Ford; perhaps if the Bakken had a gas leg we would be seeing new activity there. Only the Vaca Muerta and Montney span such a wide range of produced fluids. 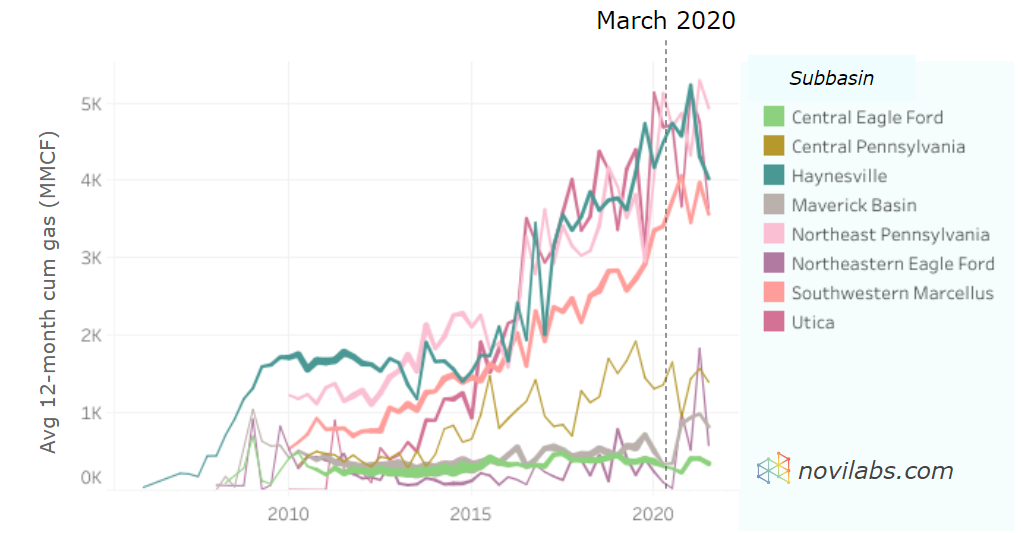 What about gas well productivity? After a five-year run where per-well performance more than doubled in Appalachia & Haynesville, 12-month cumulative volumes have started to plateau. The dramatic improvements have been a result primarily of longer lateral lengths and more intense completions, among other factors, but operators may now be finding the economic limit of these innovations.

When we shared an earlier version of this report on LinkedIn, some folks were quick to point out that the Barnett has seen some interesting activity over the last few years. With large refrac campaigns from BKV and even some infill drilling going on, production declines have been at their lowest levels since 2012. The Fayetteville has not seen a similar trend, but it will be interesting to see the extent to which these older plays get a second lease on life with refracs, artificial lift improvements, and infill drilling.

If gas well performance has been relatively consistent over the past few years, and oil wells have not been going gassier except in the Eagle Ford (which is a consequence primarily of the locations drilled), then we are left with activity levels as the primary driver of the shale gas production increases.

Operators have more than doubled their horizontal rig count in the gas plays since the depths of the pandemic, and increased production is the predictable result, though we do note that these numbers still sit below the previous high of 145 set in April 2019.

Permits are a leading indicator in advance of drilling rigs going on site, and permitting has begun to roll over a bit since summer 2022. It will be interesting to see whether these numbers pick back up if prices stay elevated.

The resiliency of American natural gas production is something to be proud of, especially this year as Europe has relied on US LNG to fill much of the gap left by the lost Russian supply. The US is blessed with some of the most productive reservoir in the world, and operators have taken advantage of that to deliver clean, reliable energy to their customers.

All of the data and charts from this report are available with your Novi subscription. If you would like to talk to one of our experts to learn more, please reach out below: novilabs.com/demo

What does the curve look like for methane vented, burned and leaked in gas drilling, completion, workover, production and transport operations? Has the industry made any headway in reducing greenhouse gas emissions? Are these emissions fully reported?

Seems like the spike in Fracking before the gas runs out. It has a burst before it is gone. A very short range plan for sure. What affect does it have on the area and water supply?