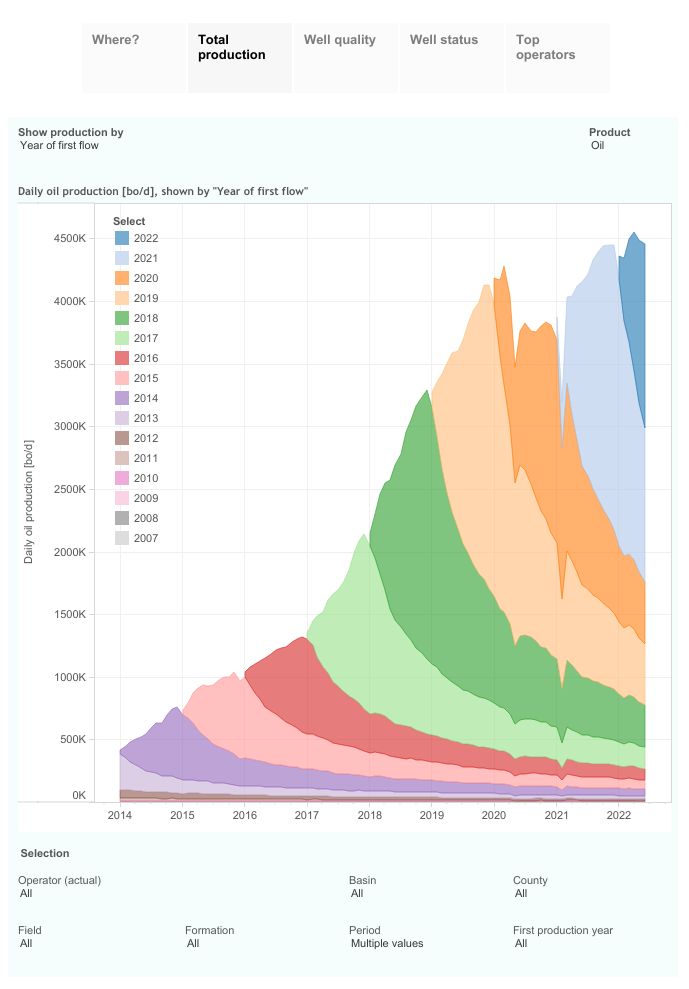 Visit the blog to explore the full interactive dashboard

After a few months hiatus, we’re now back with regular updates on unconventional developments in all the major US tight oil & gas basins!

This interactive presentation contains the latest oil & gas production data from all 37,174 horizontal wells in the Permian (Texas & New Mexico) that started producing from 2007/2008 onward, through May.

Permian tight oil production rose to a new output record in May, at around 4.6 million b/d (after upcoming revisions, horizontal wells only). Not all this production is reported yet by the state agencies, thus the apparent drop in production in above chart. Natural gas production rose as well, to over 18 Bcf/d. You can view this by toggling the ‘Product’ selection to gas.

The horizontal rig count in the Permian has risen to 327 as of last week (according to Baker Hughes), with 97 of these located in New Mexico: 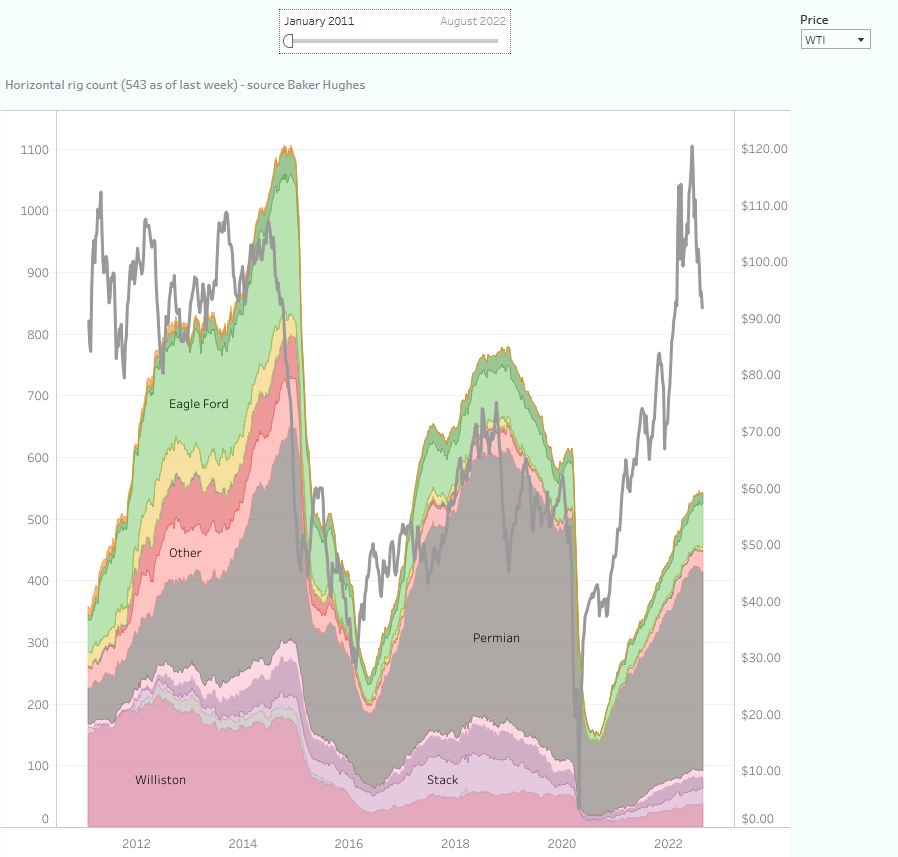 As you can see, the increase in drilling activity appears to have halted now that oil prices have come down from recent highs. Currently 60% (323 out of 543) of the rigs drilling for horizontal oil wells are active in the Permian Basin.

The following dashboard shows output in the top-10 producing counties in the Permian Basin: 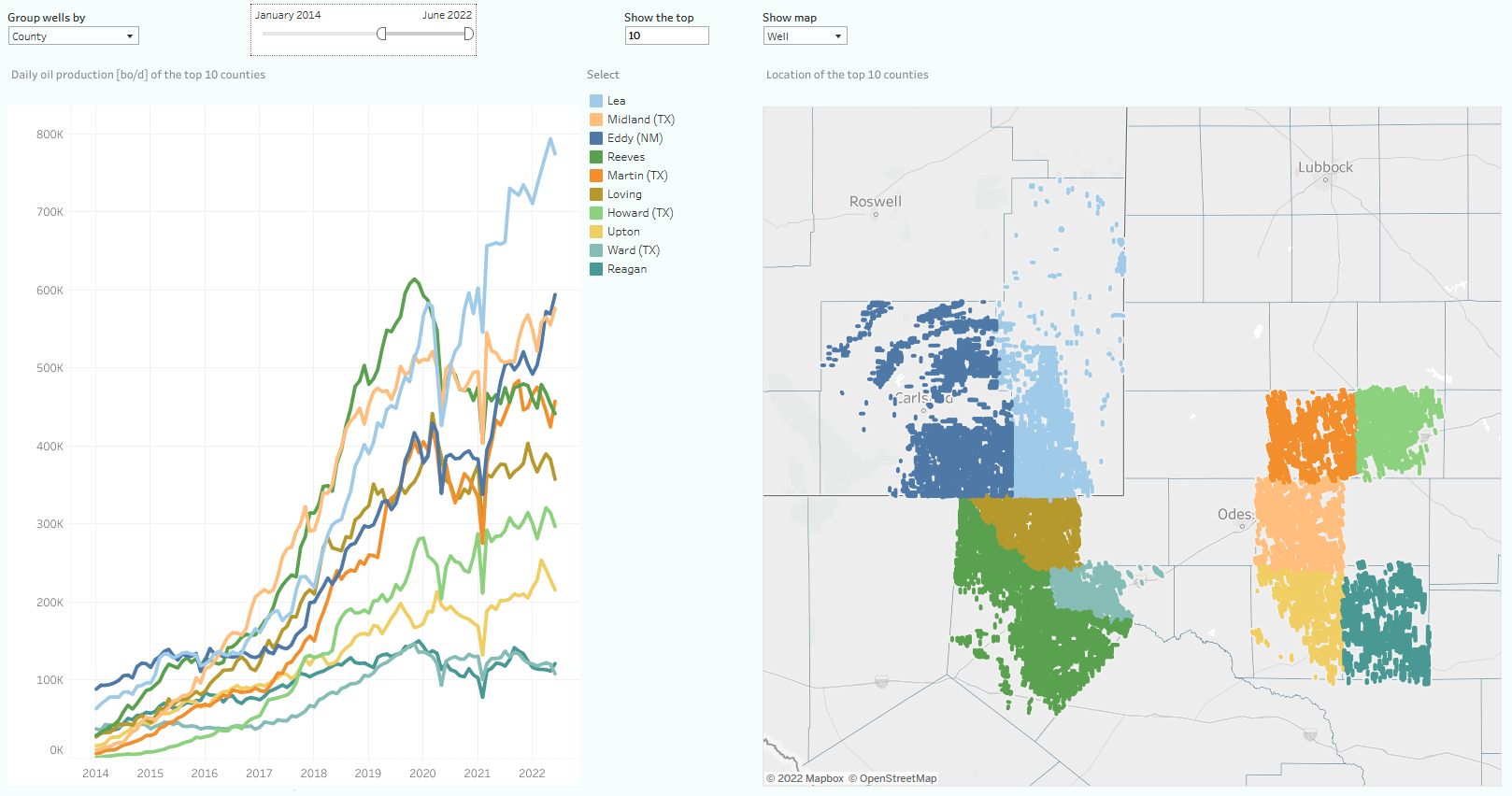 Unconventional production in Eddy County (NM) just surpassed Midland. The graph also shows that although production is still growing in some counties, it has stagnated or fallen in others, notably Reeves.

In the “Well quality” tab, the production profiles for all the horizontal wells in the Permian Basin can be found. Here we also share how well performance in the top 3 oil-producing counties has developed over the past decade: 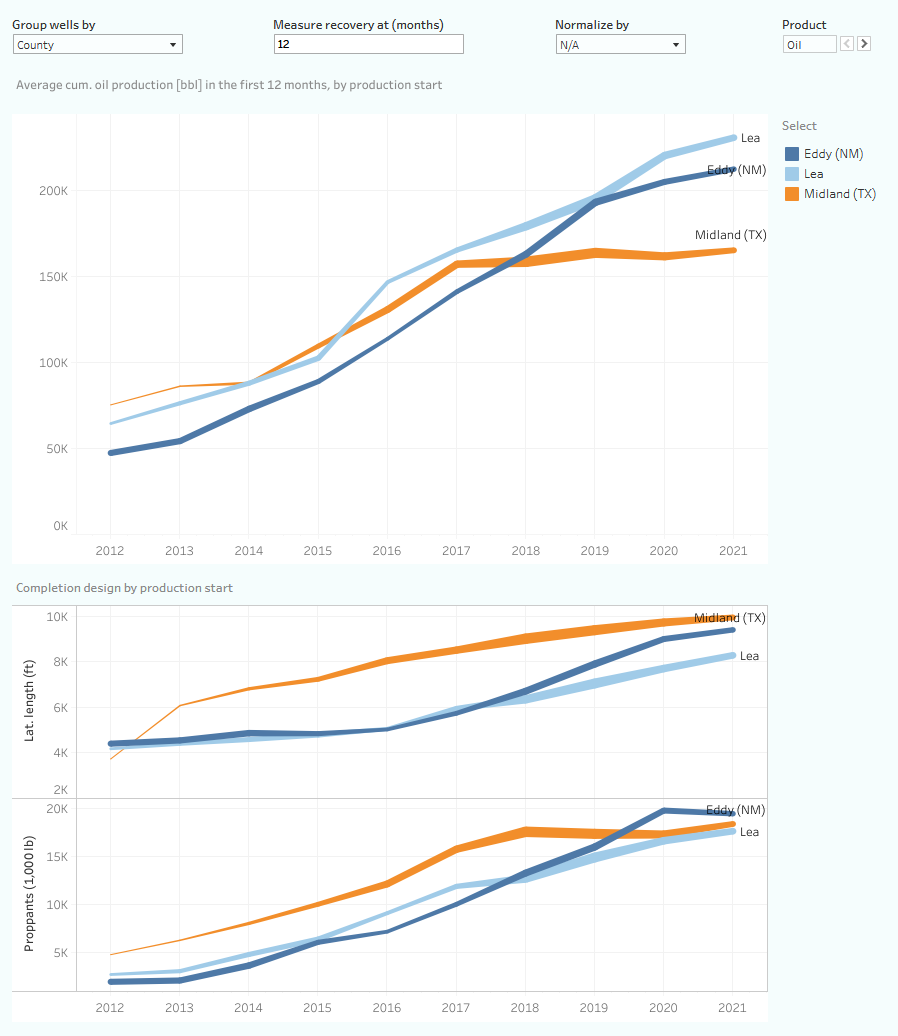 The top chart reveals that well productivity, as measure by the cumulative oil recovered during the first year on production, has increased significantly over time, from 50-80 thousand barrels of oil in 2012, to around 200 thousand barrels of oil for wells coming online last year. However, you can also see that productivity has stagnated in Midland County, even before taking into account that laterals have slightly increased during the last few years, as shown in the 2nd chart from the top.

In the final tab (“Top operators”) the production and well positions are displayed for the 15 largest producers in the Permian. Pioneer Natural Resources is well in the lead, with an output of half a million barrels per day.

Visit our blog to read the full post and use the interactive dashboards to gain more insight: https://bit.ly/3OfSA8S