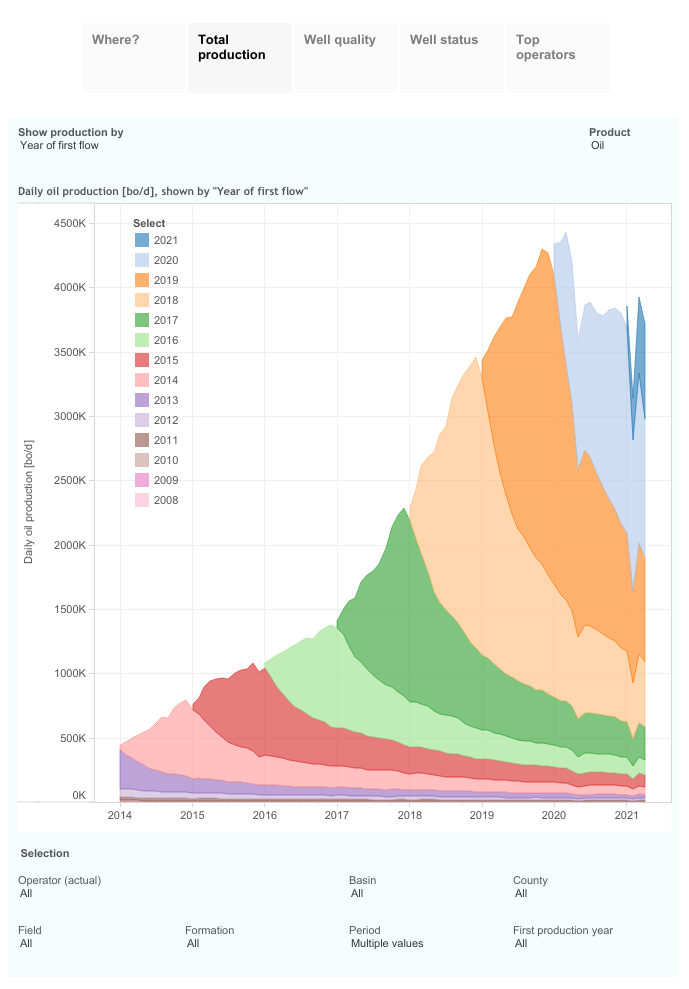 This interactive presentation contains the latest oil & gas production data from all 31,152 horizontal wells in the Permian (Texas & New Mexico) that started producing from 2008/2009 onward, through April 2021.

Tight oil production in the Permian was flat at 4.0 million bo/d in April (after revisions, horizontal wells only). About half of this was produced from wells that were completed since early last year, as is visualized by the light & dark blue areas in the chart above. Natural gas production, at over 15 Bcf/d, was close to record levels. Note that although April production appears to be down, just over a 1,000 wells were not yet reported (notably Devon Energy in New Mexico).

Over 2/3rds of the horizontal oil-directed rigs in the lower 48 were drilling in this basin, as of last week (228 out of 337, according to Baker Hughes). The last time weekly WTI prices were as high as last week ($73), almost 3 years ago, this number was more than double ( 761).

Our Supply Projection dashboard shows what would happen if drilling activity would stay at this level (although you can simulate your own rig count projections in the interactive version available in our ShaleProfile Analytics service): 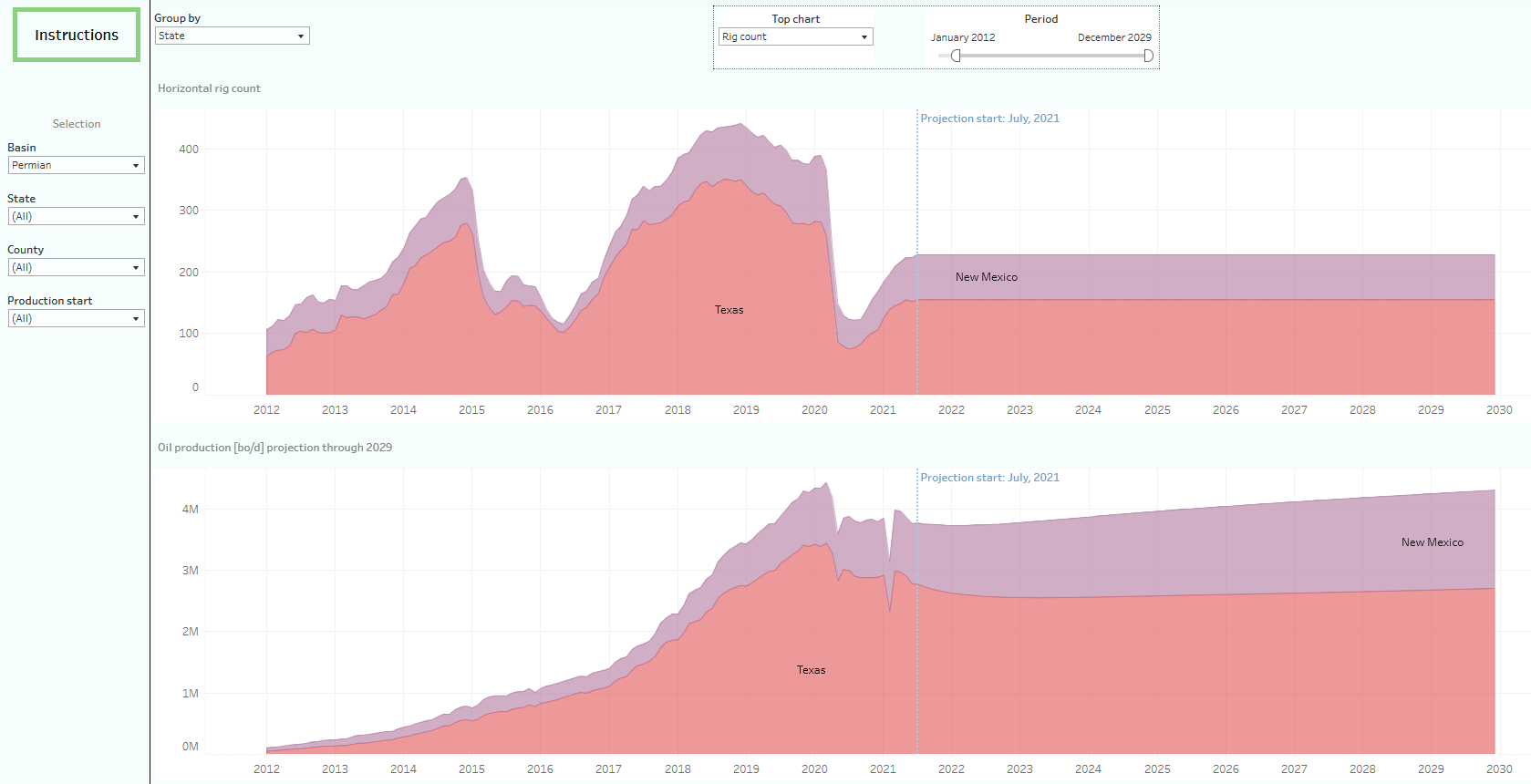 Tight oil outlook in the Permian, based on current drilling activity & well productivity, by state

As you can see, the lights are green again and production growth will soon resume, if it hasn’t already, although the growth rate will be far lower than in the 2017-2019 time frame.

In the “Well quality” tab, you can find how well performance has improved in this basin over time. The wells that began producing since 2016 peaked at between 500 & 900 b/d, and will decline to about 50 b/d by year 5, after which they will have recovered close to 300 thousand barrels of oil.

The 2 counties with the most rigs are Lea (46) and Midland (37). Here we show a comparison of their average well productivity: 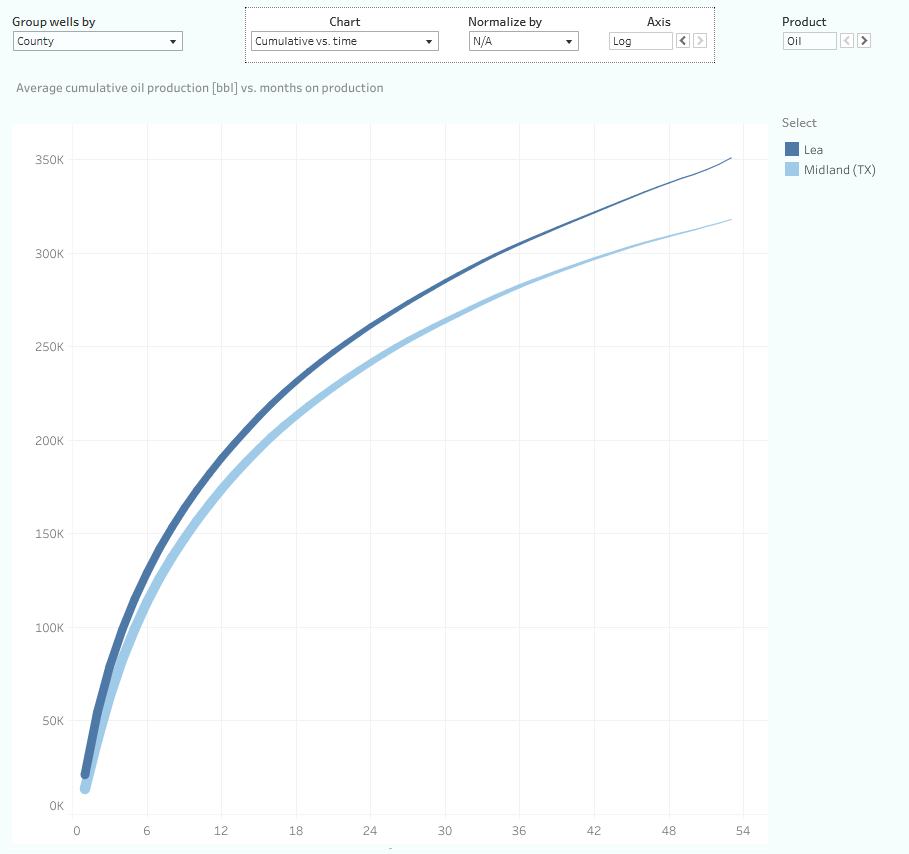 Average cumulative oil production vs. months on production, for Lea & Midland. Includes horizontal oil wells that were completed since 2017.

The average performance of the ~4,500 horizontal oil wells that were completed in these 2 counties since 2017 is shown here by county. Average productivity is slightly higher in Lea County, especially if one would normalize for lateral length (possible in our subscription services), as the wells are shorter in Lea (~7.5k feet vs. 10k feet in Midland).

In the final tab (“Top operators”) the production and well positions are displayed for the 10 largest producers in the Permian. Pioneer Natural Resources’ output jumped in April, due to its DoublePoint Energy acquisition, to over half a million b/d.

We will have a new post on the Eagle Ford early next week, followed by a post on Pennsylvania.

We are sad to announce that we are unable to attend the URTeC in 2 weeks, due to travel restrictions in place from the Netherlands. We hope to be back next year!

On a more positive note, another large trading firm signed up with us this week. A critical service for them was our REST API, through which accurate and highly up-to-date well and production can be downloaded on demand, which also includes production forecasts on well level, permits and directional survey data. More information on this service can be found here: ShaleProfile Data.

Visit our blog to read the full post and use the interactive dashboards to gain more insight: https://bit.ly/3wHKbRR