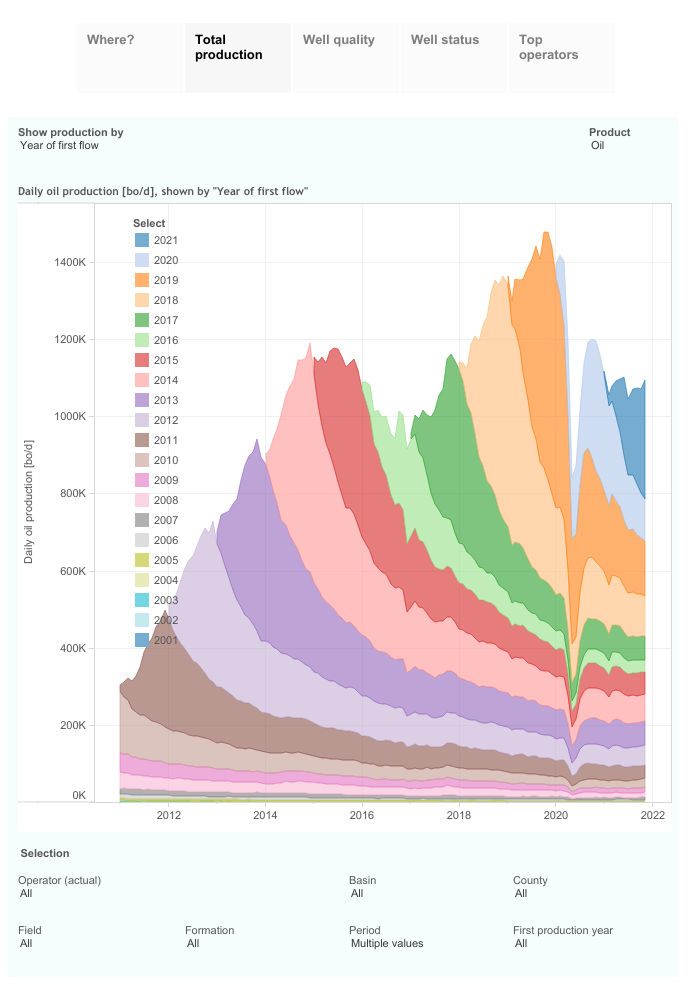 These interactive presentations contain the latest oil & gas production data from all 16,944 horizontal wells in North Dakota that started production from 2001 onward, through November.

Oil production in North Dakota from horizontal wells rose by 2% m-o-m, to 1.09 million b/d in November. Natural gas output increased as well and came in at 3.0 Bcf/d.

Although drilling activity has picked up in recent months, with 26 rigs drilling horizontal wells as of last week (according to Baker Hughes), from only 8 in September 2020, this level can only sustain about 1 million b/d assuming no changes in productivity (from our Supply Projection dashboard):

The top chart displays the horizontal rig count over time, while the bottom chart plots the total oil production from existing and future horizontal wells.

After several years of significant productivity increases, well results have barely changed in the 4 core counties in North Dakota since 2017. This is especially visible after normalizing for lateral length (as these have slightly increased) 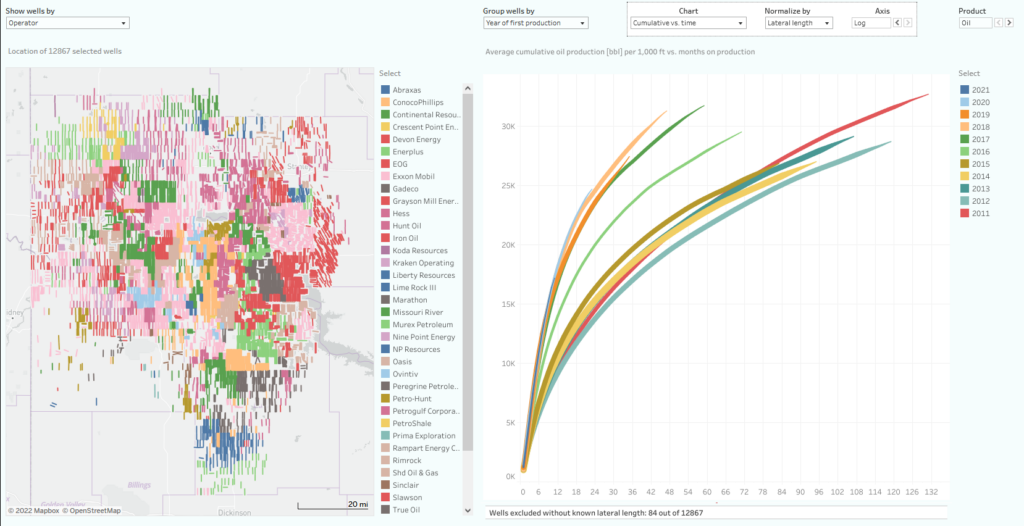 Recent wells are on track to recover 25 thousand barrels of oil per 1,000 ft during the first 2 years on production, just 2% higher compared with the wells that came online in 2018.

The final tab shows the production history and location of the top 12 operators in North Dakota. Continental Resources had with 169 thousand b/d of operated production a great November month, fueled by the excellent performance of the 19 wells it brought online in October.

EOG is no longer in this list, as it dropped to the 14th place with an output of only 22 thousand b/d (down from 96 thousand b/d in September 2014). The performance of its wells in Mountrail County (good for 2/3rd of its production) has rapidly deteriorated, probably due to too tight spacing:

Note in the bottom chart that the GOR has risen steeply for most vintages and that there is a corresponding decline in production rates (top chart). Where the 2007, 2008 and 2013 vintages before were on track to recover more than 600 thousand barrels per well (x-axis), that now has become unlikely.

Early next week we will have a new post on the Permian, for which we already have November production data for most wells.

Visit our blog to read the full post and use the interactive dashboards to gain more insight: https://bit.ly/3nmjd0u