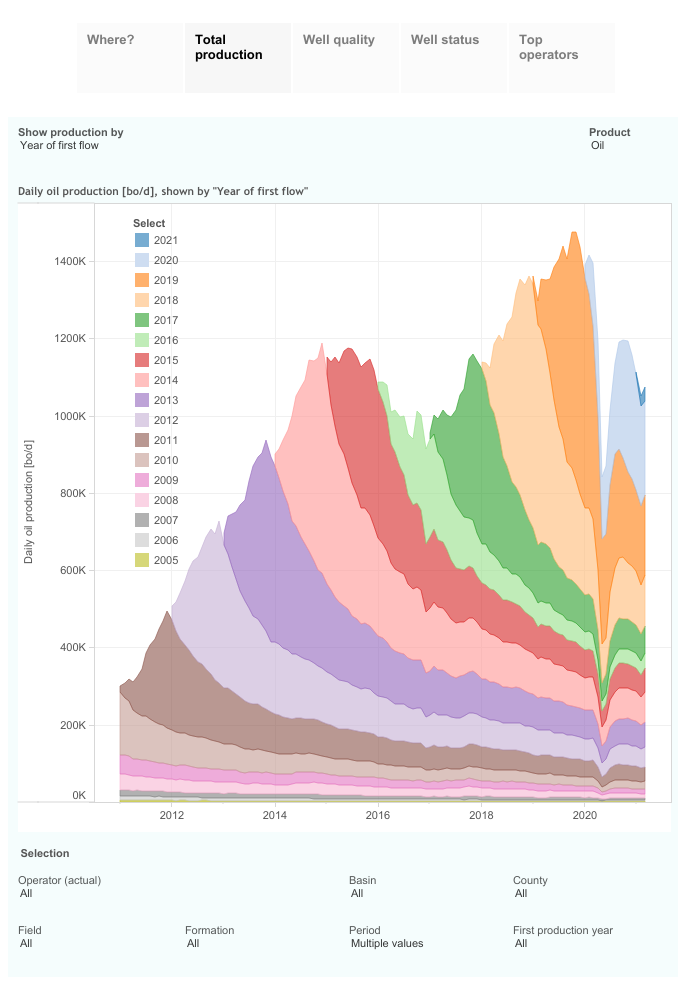 These interactive presentations contain the latest oil & gas production data from all 16,363 horizontal wells in North Dakota that started production from 2005 onward, through March.

Oil production in North Dakota from horizontal wells grew by 2% m-o-m, to 1.07 million bo/d in March, after a 6% drop the month before, when several states were hit by harsh winter weather. Natural gas production was with 2.9 Bcf/d not far from the peak exactly one year earlier, at 3.1 Bcf/d.

Despite the March uptick, the outlook is not good for tight oil production in the state, with only 14 rigs running (source: Baker Hughes). This can be best viewed in our Supply Projection dashboard: 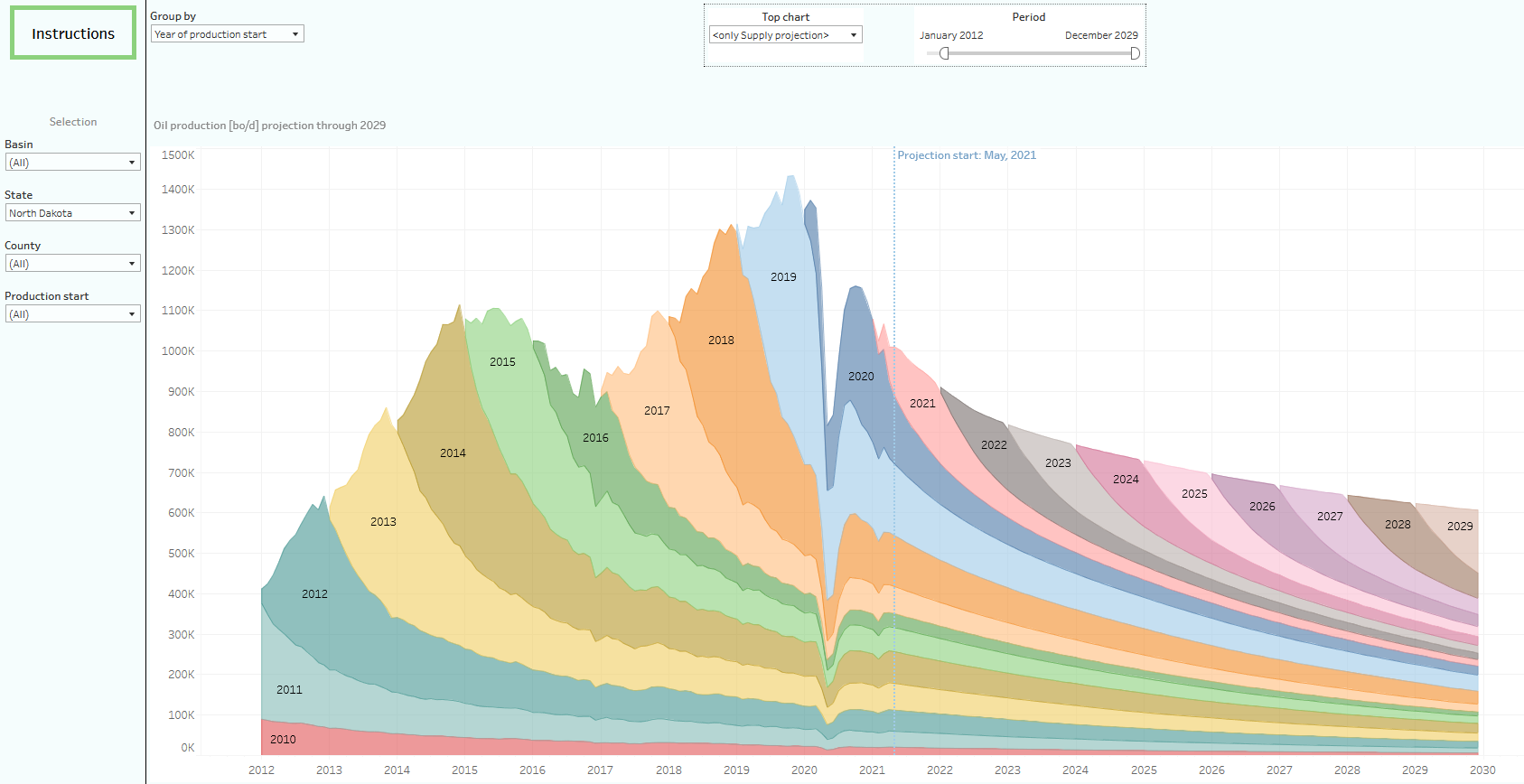 Tight oil outlook in North Dakota, based on the current rig count and well/rig productivity.

As is shown in the image above, at current conditions output might fall to below 900 thousand bo/d by the end of next year.

Using the interactive model available in this dashboard, I found that at least 30 rigs are needed to keep output above 1 million bo/d.

The 4 core counties in North Dakota (Dunn, McKenzie, Mountrail, Williams) are together good for over 95% of total production. The following image shows how well productivity and key completion parameters (lateral length & proppant loading) have changed in the last couple of years within these counties: 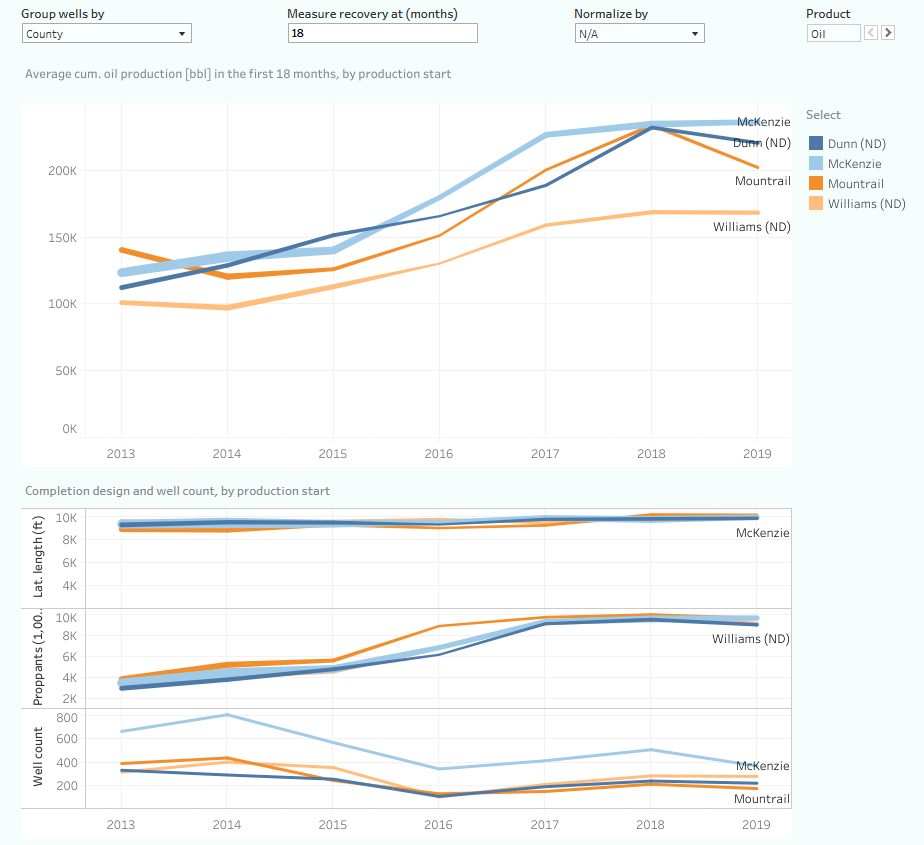 Well productivity and completion design in the 4 core counties of the Bakken.

Well productivity, as measured by the average cumulative oil recovered in the first 18 months, topped out in 2018, at 234 thousand barrels of oil, on average, in all except Williams County. This coincides with a peak in proppant loadings, at almost 10 million pounds per completion.

The number of inactive wells dropped to 1,718 in March (see the “Well status” tab), the lowest number since April last year, although an up-trend is still clearly visible.

The final tab shows the top 12 operators in the basin. Oasis, the number 11 on this list, will acquire (former QEP) assets belonging to Diamondback. You can see the position and performance of those assets in this image, from our Productivity Ranking dashboard: 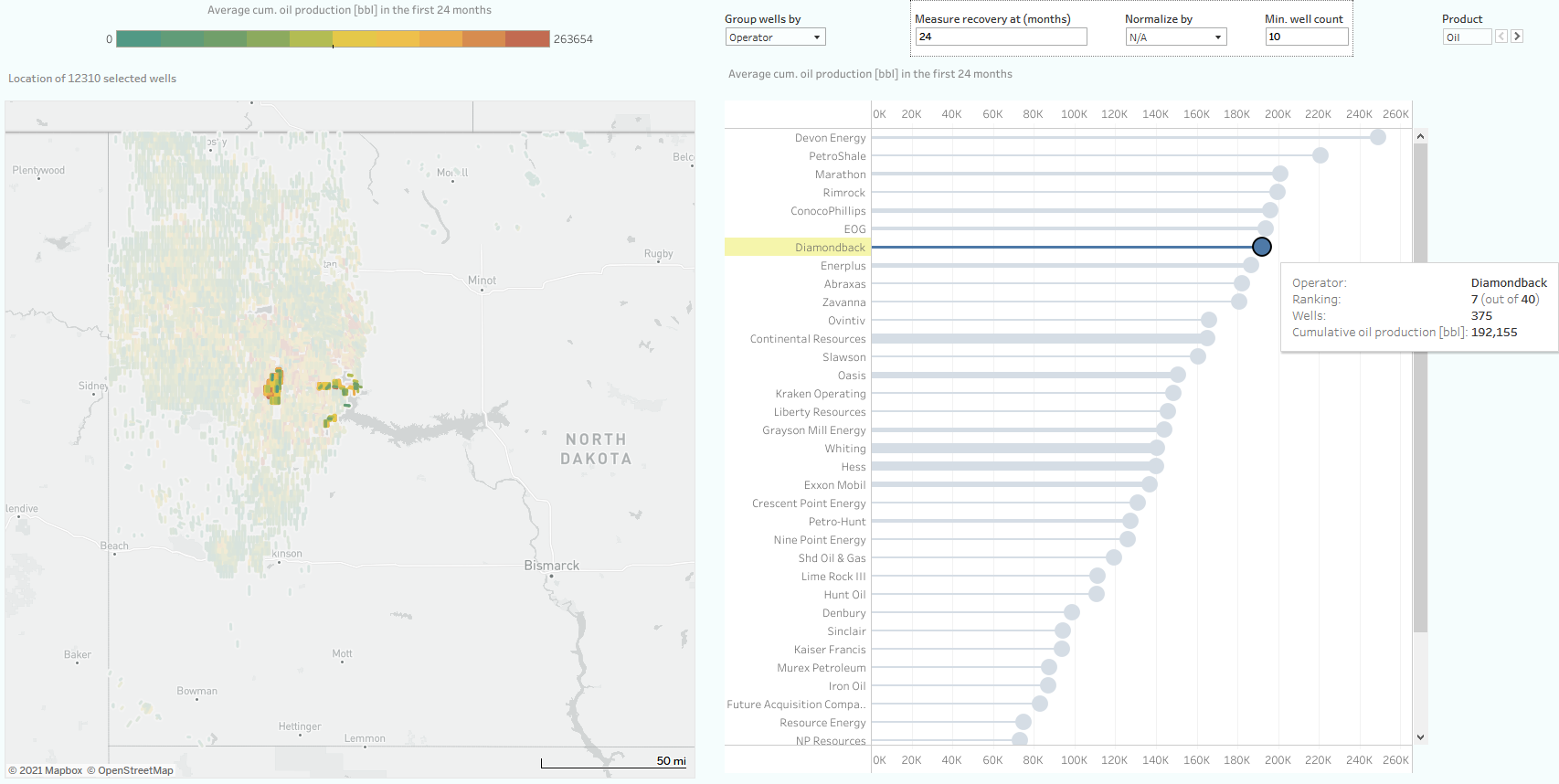 Productivity ranking of operators in North Dakota (hz wells only).

The 375 horizontal wells that began production since 2011 and have already produced for at least 2 years, and were  part of this transaction, recovered on average almost 200 thousand barrels of oil in the first 2 years. This was a very similar performance as EOG achieved, and well above Oasis’ own results.

We keep expanding our coverage and last week launched a more comprehensive data subscription package. More info, including a description and sample of the data, is available on our ShaleProfile Data page.

Visit our blog to read the full post and use the interactive dashboards to gain more insight: https://bit.ly/33wO4Nh