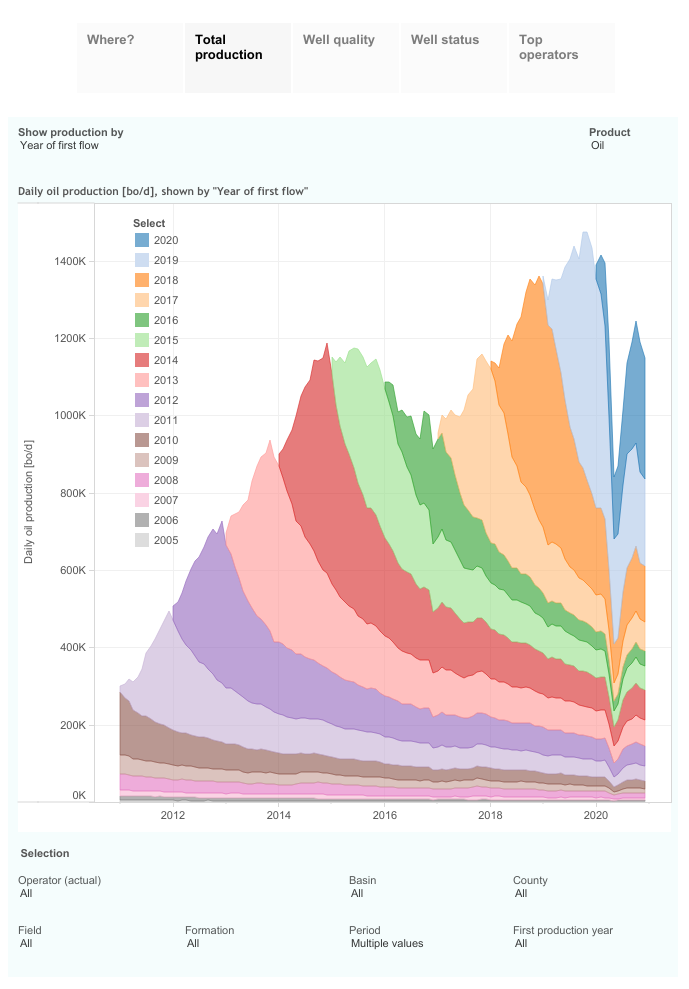 These interactive presentations contain the latest oil & gas production data from all 16,234 horizontal wells in North Dakota that started production from 2005 onward, through December.

Oil production in North Dakota continued its fall to 1.15 million bo/d in December (before revisions). Almost 600 wells were completed in 2020, fewer than half compared with the previous year (1,270) and the lowest number since 2009. This was obviously not sufficient to maintain output and the loss year-over-year was almost 300 thousand bo/d.

With only 12 rigs drilling horizontal wells  as of last week (according to the Baker Hughes rig count), drilling activity is below even its somewhat smaller cousin the Eagle Ford where 30 rigs are active. At least permit activity was the highest in the 4th quarter of 2020:

Permit activity in North Dakota since 2008, by quarter.

This screenshot was taken from our Permit activity dashboard. The chart on the right shows how permit activity has changed in this area, by quarter. It reveals that in Q4 228 permits for new horizontal wells were approved. In the actual dashboard you can find also easily pinpoint the exact location of these permitted wells.

The following chart (from the same dashboard) ranks the operators that received those 228 permits: 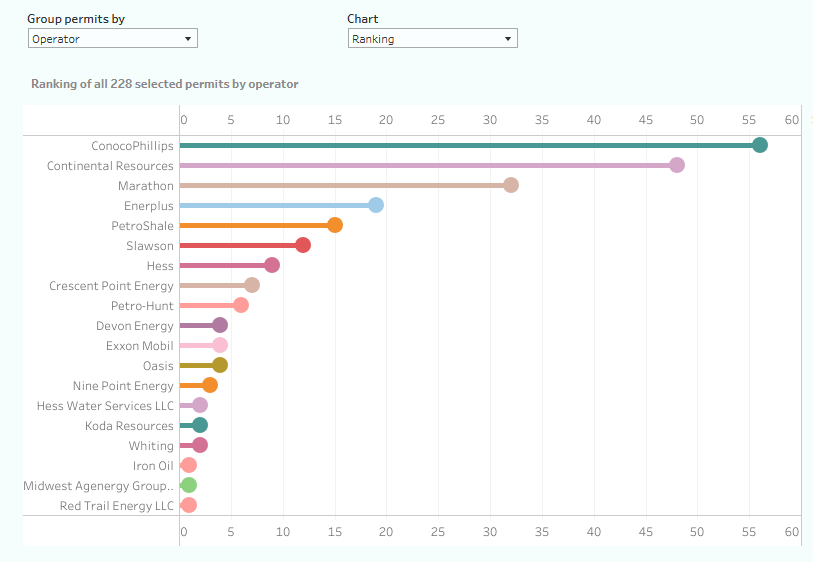 Ranking of operators in North Dakota, by approved permits in Q4 2020.

The 3 operators with the most new permits were good for 60% of the total. Surprisingly, ConocoPhillips, which is not even in the top-3 in terms of output, was well in the lead on this metric.

In the “Well status” overview, the status of all these wells can be found. There you’ll find that the spike in non-producing (‘inactive’) wells has now passed. The bottom chart plots all these wells by production level; in December 40% of all the horizontal wells in North Dakota were producing below 25 bo/d (6,517 wells).

The final tab shows the top 8 operators in the basin. Continental Resources, the number 1, was back at the product level it first reached 2 years earlier. 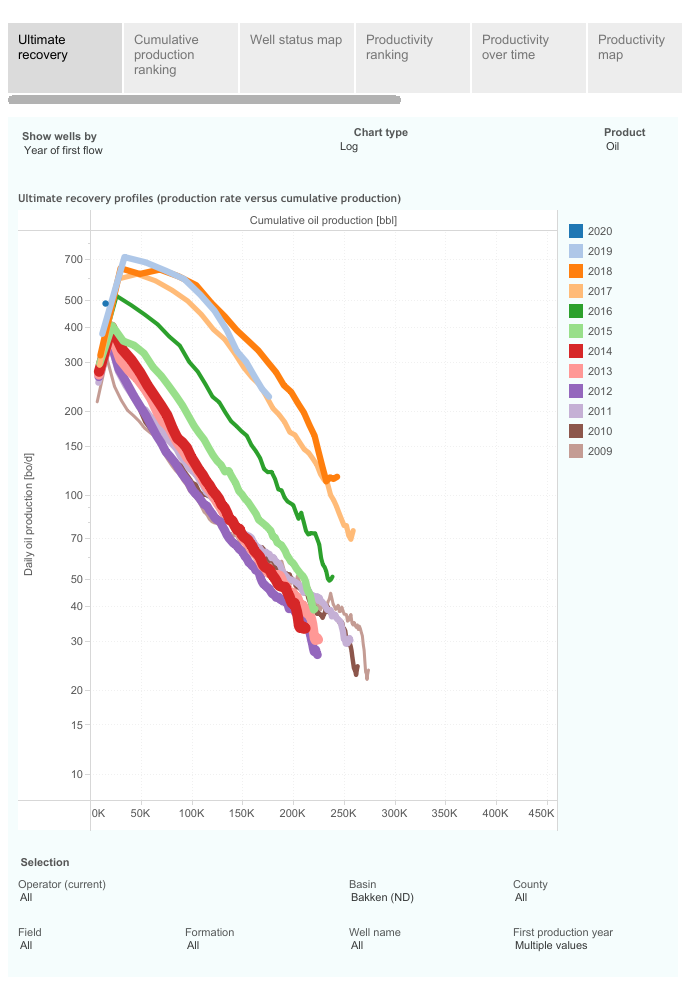 This “Ultimate recovery” overview shows how these horizontal wells are heading towards their ultimate recovery. They are grouped by the year in which production started.

So far the wells that began production in 2018 had the best start on average, as those 1,268 wells recovered 240 thousand barrels of oil in the first 2 years, on average. The few wells that came online in 2020 did peak at even higher rates (show the wells by quarter of first production to see this). You can now also find that the wells from the 2009-2011 period, despite a slower start, are now tracking a better performance than those in the 4 years after.

I also wanted to share this chart with you, in which average well productivity can be viewed over time, by county: 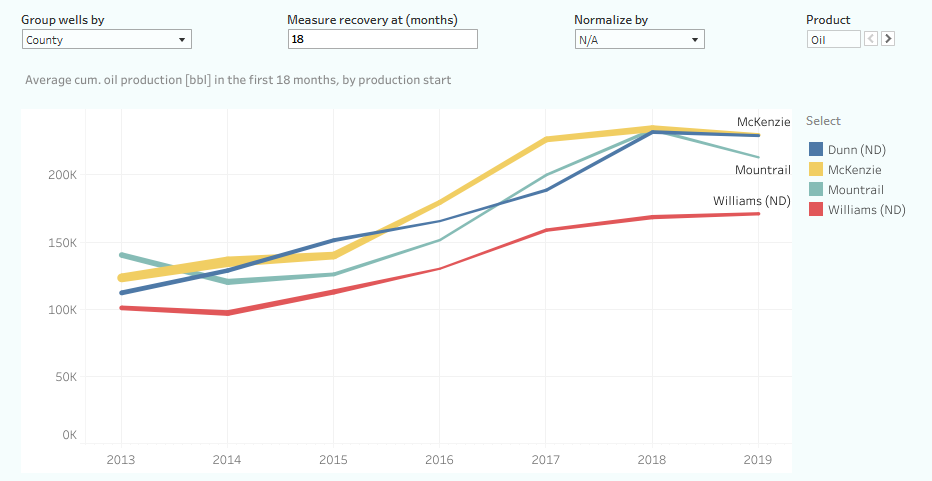 Well productivity in the 4 main counties in the Bakken.

For each county, the average well productivity, as measured by the average cumulative oil recovered in the first 18 months is displayed over time. You’ll note that now the best performing wells can be found in the counties McKenzie and Dunn.

Next week we will be back with posts on the Permian and the Eagle Ford.

Visit our blog to read the full post and use the interactive dashboards to gain more insight: https://bit.ly/2Lw5uo5