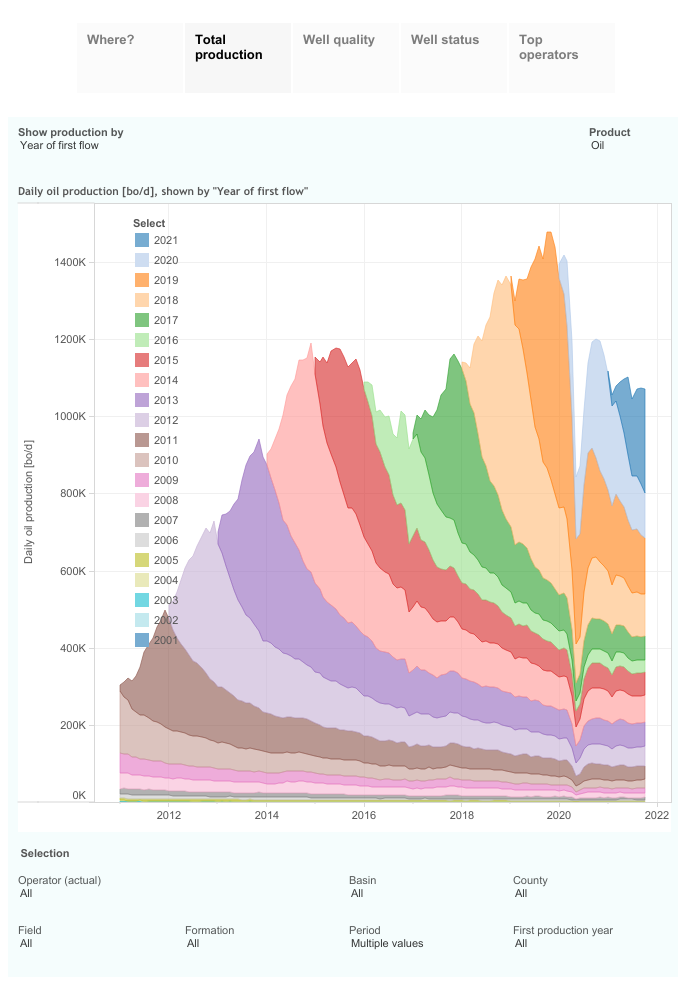 These interactive presentations contain the latest oil & gas production data from all 16,888 horizontal wells in North Dakota that started production from 2001 onward, through October.

Oil production in North Dakota from horizontal wells was flat m-o-m for the 2nd month in a row, at 1.07 million b/d in October. Natural gas output, at 2.9 Bcf/d, was close to the historical high in November 2019 (3.1 Bcf/d). Only 492 new horizontal wells were completed through October, the lowest number since 2009.

Still, activity is also picking up in this basin, and as of last week 26 rigs are drilling horizontal wells, according to Baker Hughes, the highest number in more than 1.5 years. If well productivity and rig efficiency stay where they are, this level could sustain an output of just over 1 million b/d going forward (from our Supply Projection dashboard):

The top chart displays the horizontal rig count over time, while the bottom chart plots the total oil production from existing and future horizontal wells.

Production is down in each of the 4 core counties of the Bakken; Dunn, McKenzie, Mountrail, and Williams. But the decline is the steepest in Williams County, which produced only 136 thousand b/d in October, just half from what it produced 2 years earlier (271 thousand b/d in November 2019).

Here we can see that well productivity has not increased in Williams county since at least 2017: 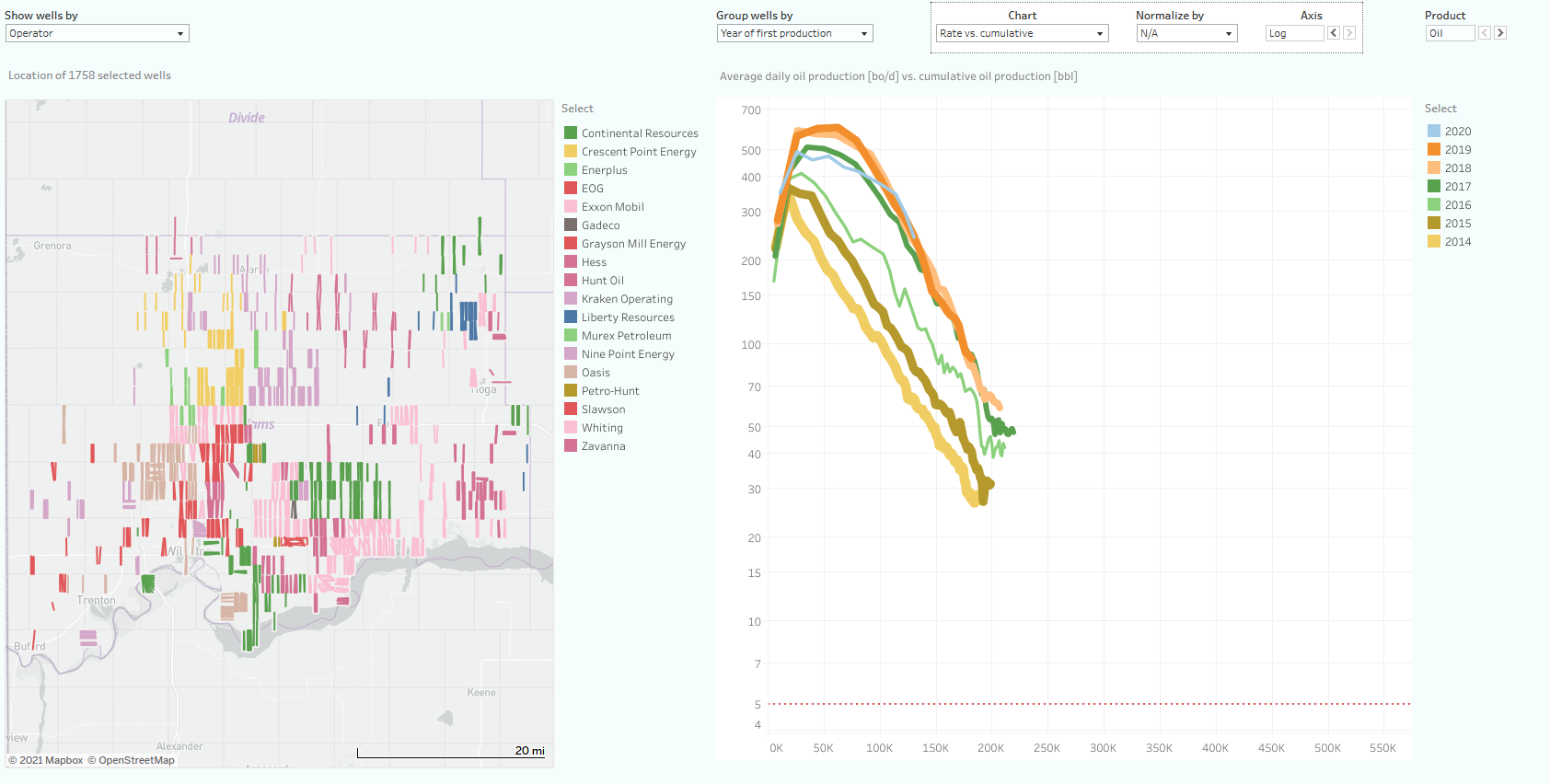 Interestingly, Williams County is still in 2nd place in terms of total gas production. The gas/oil ratio has steadily increased over the years, and newer wells reach a GOR of 4 Mcf/barrel within 2 years on production: 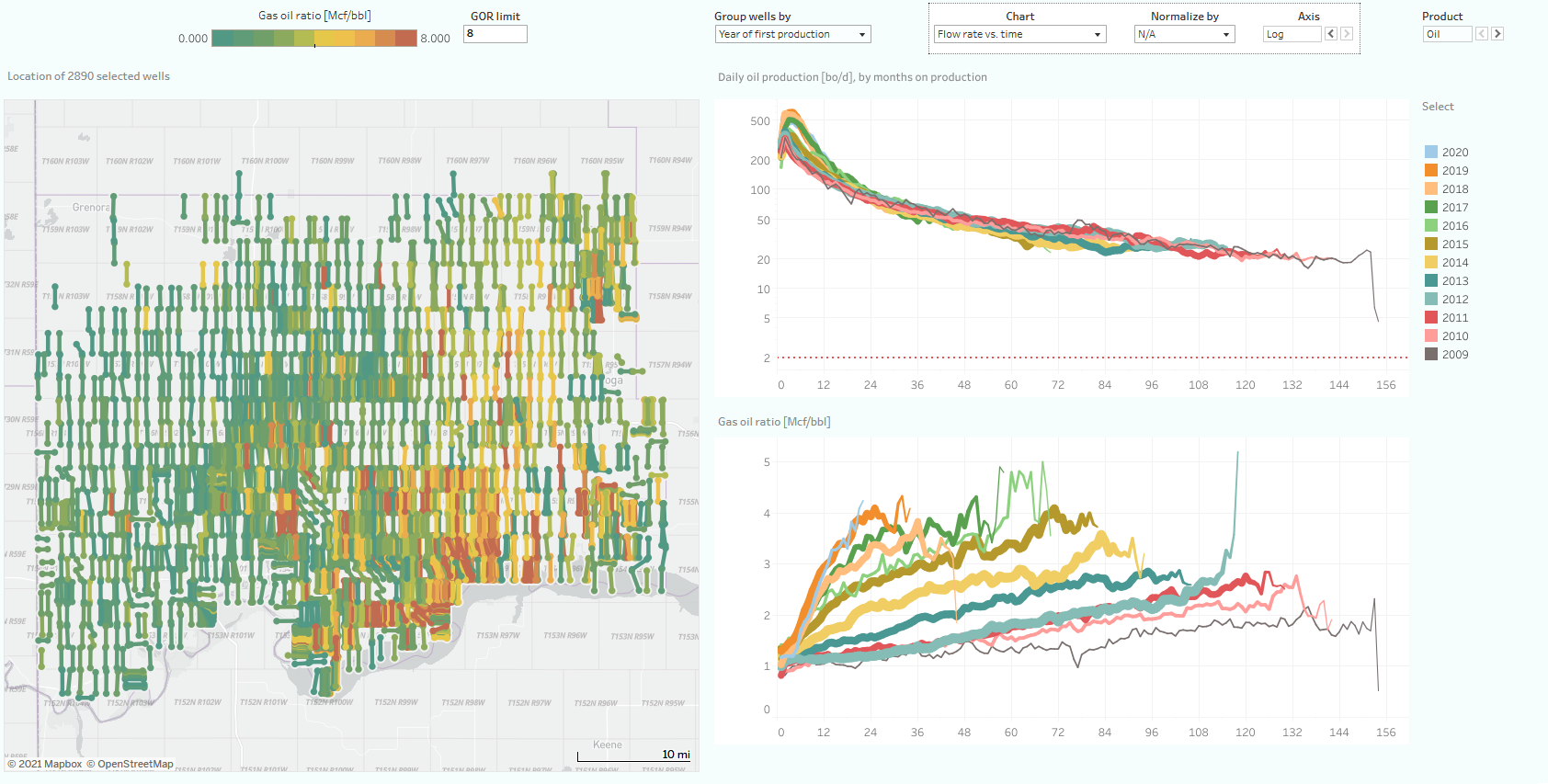 On the map all wells here are colored by the gas/oil ratio in the most recent month. The bottom right chart shows the performance of all wells, by vintage year of first production (production rate vs. months on production), while the bottom-right chart plots the average gas/oil ratio for the same wells.

Early next week we will have a new post on the Permian, for which we already have production data through October for most wells.

Visit our blog to read the full post and use the interactive dashboards to gain more insight: https://bit.ly/3q04rNd