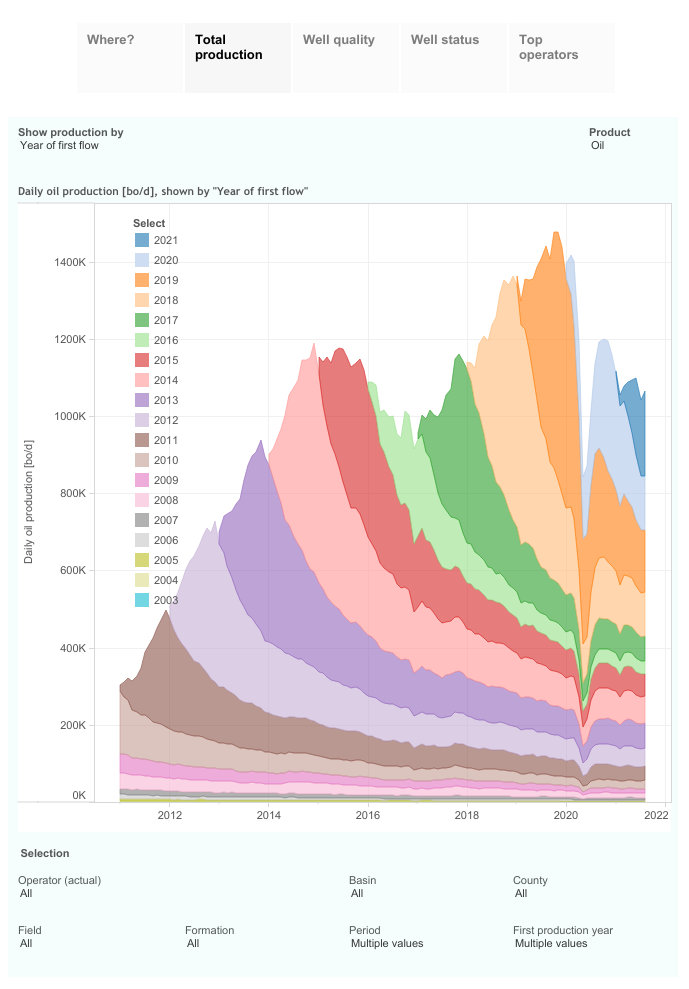 These interactive presentations contain the latest oil & gas production data from all 16,771 horizontal wells in North Dakota that started production from 2001 onward, through August.

Oil production in North Dakota from horizontal wells increased by 2% to 1.06 million b/d in August. Only 366 horizontal wells came online this year through August, the lowest number in a decade.

In the 3rd tab (Well quality), you can view how average well productivity has changed over time in North Dakota.  To figure out much these wells are likely to produce in total, the following dashboard from our analytics service comes in handy:

By extrapolating these curves until an economic limit is reached, you can make a rough estimate on ultimate recovery. It appears that the wells that have come online since 2017 will on average have a cumulative production of 350-400 thousand barrels of oil, before having declined to a production rate of 20 b/d. In the current price environment, that is still profitable for most wells.

Parshall and Sanish are some of the oldest and largest fields in North Dakota. How have gas/oil ratios (GORs) developed here over time, and what has been the impact on well performance?

The selected wells are color-coded by the GOR in the most recent month (red is more gassy). What you can see here is that for several of the earlier vintages there is a clear inflection point when GORs suddenly increased steeply (bottom-right chart). This also seems to have coincided with a steepening of the decline (top-right chart). Newer wells are getting gassier quicker and recover less oil than earlier wells.

The following image shows how the overall oil and gas production, as well as the GOR (yellow, right-hand axis) have developed over the years here:

You can see that since 2014 the GOR has increased quite steeply, from less than 1 Mcf/bbl, to close to 2.5 Mcf/bbl in August. Total gas production is on a similar level as 5 years earlier, though oil output has fallen by almost half.

The final tab shows the production history and location of the top 12 operators in North Dakota. Continental Resources is with over 150 thousand b/d of output well above the number 2, Hess (with 99 thousand b/d in August).

For these presentations, we used data gathered from the sources listed below.

Visit our blog to read the full post and use the interactive dashboards to gain more insight: https://bit.ly/2WTRNFb