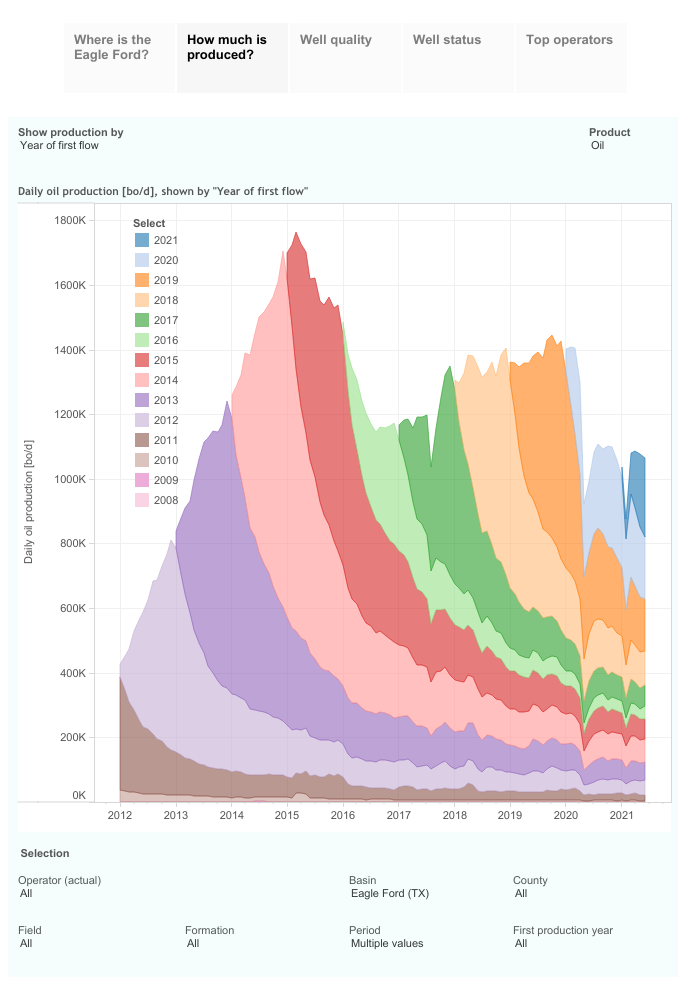 This interactive presentation contains the latest oil & gas production data from all 25,879 horizontal wells in the Eagle Ford region, that have started producing from 2008 onward, through June.

Tight oil production in the Eagle Ford was flat for the 3rd consecutive month in June, at 1.1 million b/d (Hz. wells only, after upcoming revisions). The first time the Eagle Ford produced at this level was 8 years earlier, when WTI was almost at $100/bbl. Natural gas production fell in June to about 5.6 Bcf/d.

The number of horizontal rigs in the Eagle Ford has remained at 40 during the past month (according to Baker Hughes). Only 3 of those rigs are drilling in Karnes County, the lowest number in more than a decade, and down from 10 earlier this year. This county is still responsible for 30% of the oil produced in the Eagle Ford. Our Supply Projection dashboard shows what would happen if the rig count would remain at 3 in Karnes: 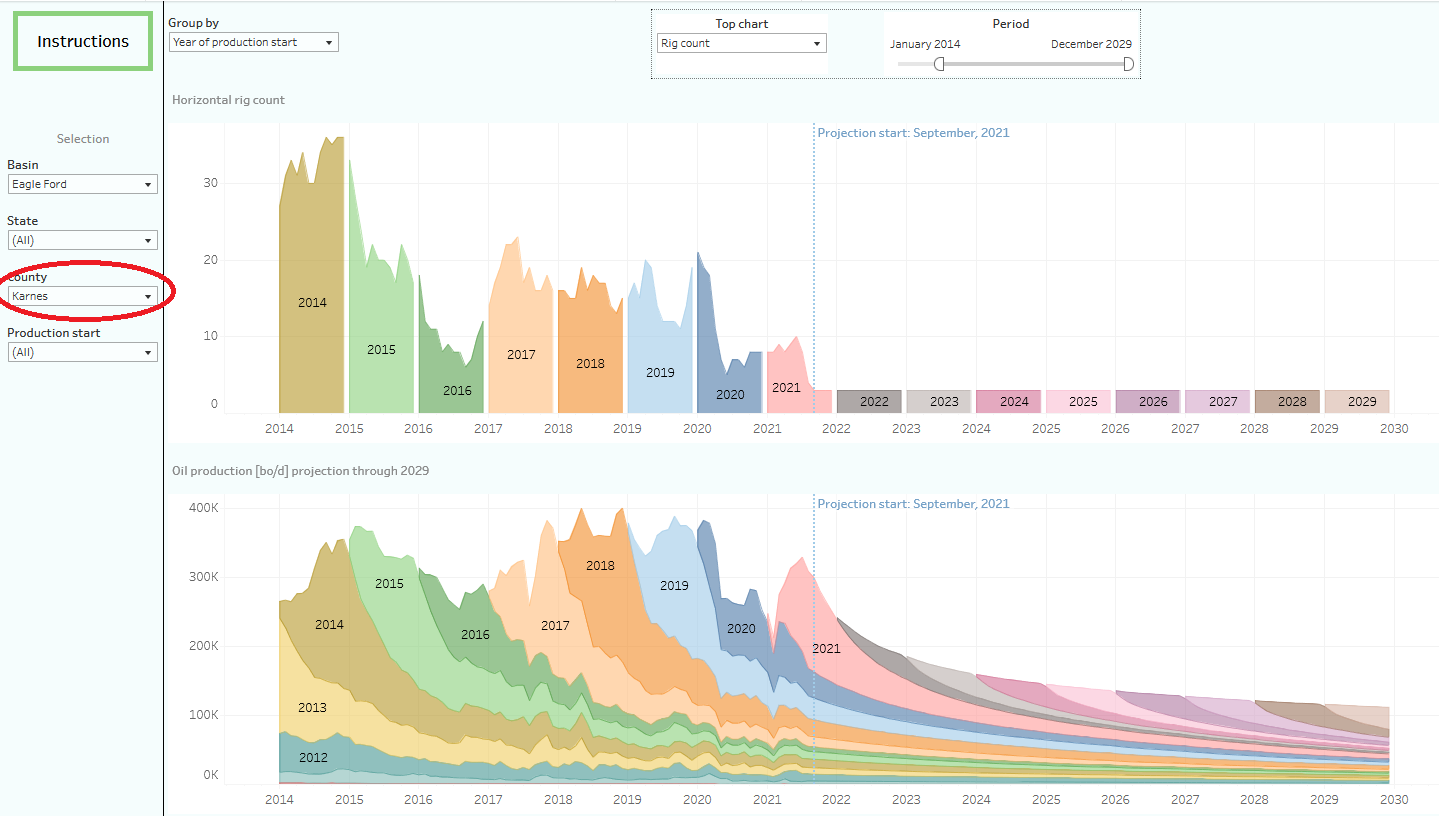 As the bottom graph here shows, 3 rigs would only be able to sustain a long-term output of not much more than 100 thousand b/d, given current well & rig productivity, compared with 300 thousand b/d currently.

Can poorer well results explain the reduced interest in Karnes? From our Production Profiles dashboard: 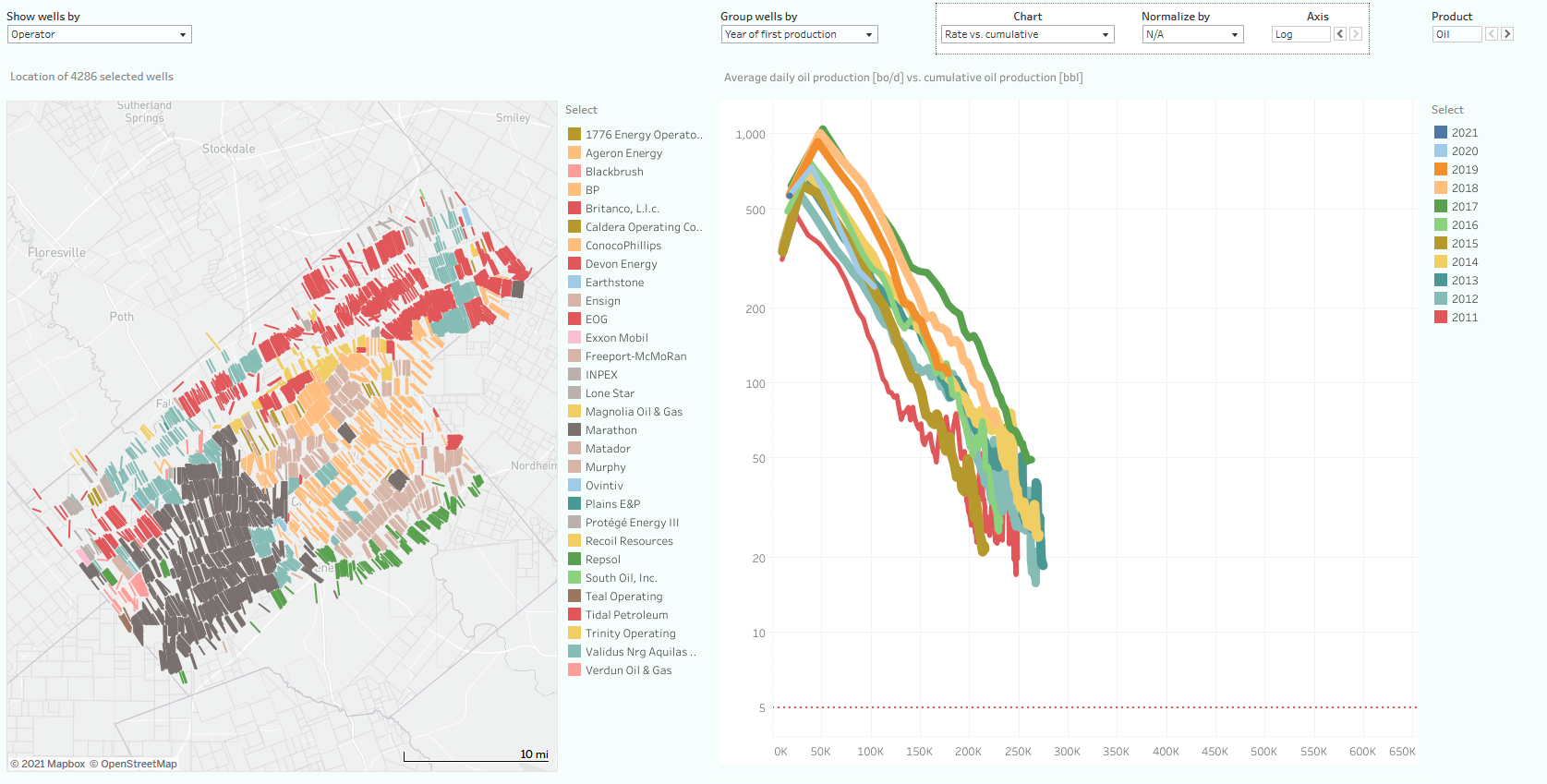 The chart on the right shows that average well productivity has fallen since 2017. All vintages are trending towards an EUR of less than 300 thousand barrels of oil, before hitting a production rate of 10 b/d. On the map the well locations of all the included wells are visible, and colored by operator.

The well performance picture becomes worse after we normalize for lateral length: 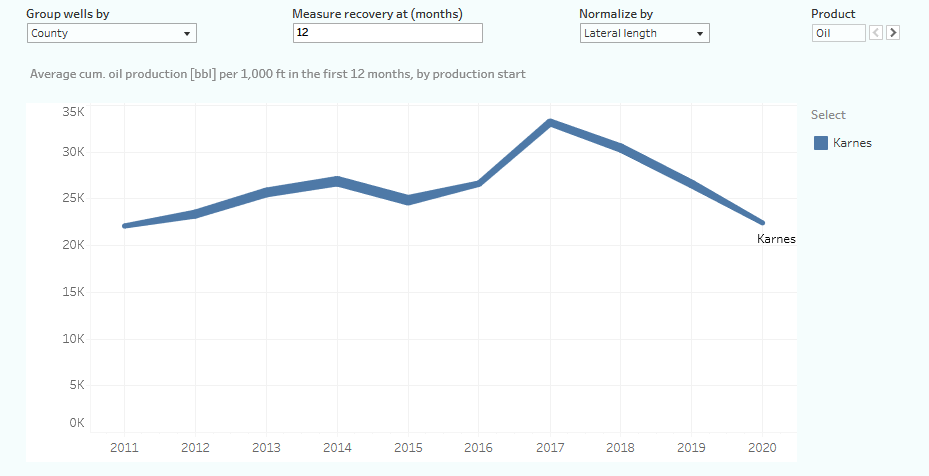 This chart shows how average performance, as measured by the cumulative oil recovered in the first year on production, normalized for lateral length, has evolved over time. The wells that were completed in 2020, and have produced for at least a year, recovered only 22.3 thousand barrels of oil, per 1,000′ of lateral length.

Analyzing the data in more detail doesn’t indicate that the abnormal shut-ins during the last 1.5 years were responsible for this deterioration.

The output and well locations of the 10 largest operators in the basin are displayed in the final tab. ConocoPhillips and Marathon were both producing at a 1-year high in June. Devon Energy’s production is down by over 75% since the start of 2016.

Our next post will be on Pennsylvania, which released July production data a while back. The other 2 states in Appalachia recently reported Q2 production data, which is available in our subscription services.

Visit our blog to read the full post and use the interactive dashboards to gain more insight: https://bit.ly/3i2BaOR