It’s becoming a pattern: anti-energy activists and fringe politicians claim to support a “just transition” for oil and natural gas workers to as-yet-uncreated jobs in other sectors. But then they applaud when those workers lose their jobs and future opportunities in oil and natural gas, and struggle to find other jobs to replace them.

The latest example is the reaction to a New York Times story reporting on college graduates who earned degrees to work in the energy industry, but who are now struggling to find jobs as the COVID-19 pandemic continues to hammer the economy. Those who claim to support a “just transition” would be expected to sympathize with these young Americans.

Instead, the story was met with instant disdain, with activists suggesting these recent graduates should not receive any support.

For instance, a senior editor of the Sierra Club’s Sierra Magazine tweeted, “Honey, where’s my violin? No, the reeeealy little one?” in response to the NYT article. 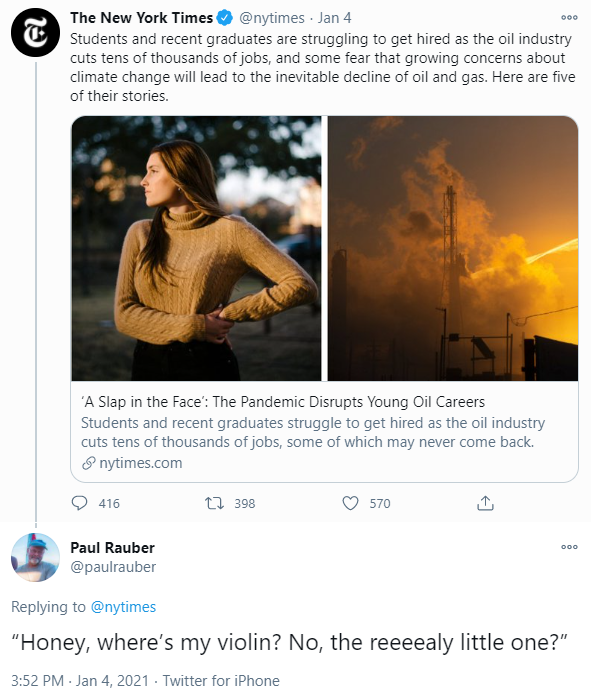 This comment came despite the fact that the Sierra Club touts the so-called just transition to support displaced workers and Sierra Magazine published an article a few years ago titled, “How to Support Clean Energy and Not Be a Jerk.”

The Society of Environmental Journalists noted that young professionals and the jobless need support, but couldn’t resist at mocking these recent college graduates by stating, “If they had studied the oil industry, they might have learned that historically, it has been a boom or bust industry.” 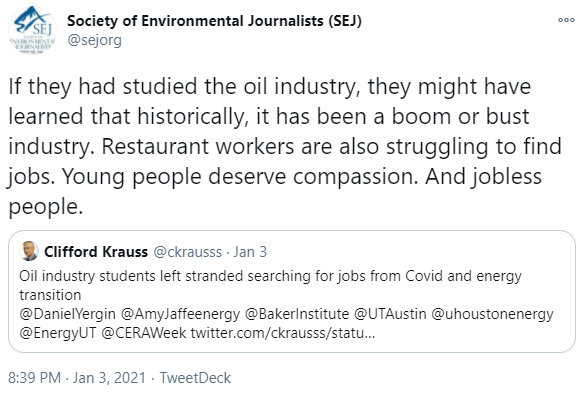 “You should have known better” isn’t exactly the same thing as “protect workers with a just transition.”

Sadly, this isn’t the first time that tough news in the energy sector has been met with glee from the same folks who keep claiming to be on the side of America’s energy workers.

In April 2020, Rep. Alexandria Ocasio-Cortez (D-N.Y.), a key author of the Green New Deal, tweeted, “You absolutely love to see it” in response to falling oil prices that led to a massive loss of jobs and paychecks. She later deleted the tweet.

A few weeks later, a group of fringe Congressional Democrats introduced legislation that would prevent CARES Act funding, meant to support companies struggling because of COVID-19, from going to the fossil fuel industry,  jeopardizing thousands of oil and natural gas jobs as well as countless small businesses like contractors, hotels, and restaurants that support a strong energy sector. The bill was even introduced despite the fact that energy workers were declared “essential” by both Democrat and Republican officials.

Then in July, as multiple pipeline projects were cancelled due to court rulings and overwhelming activist pressure, groups including the Sierra Club, 350.org, and Greenpeace – all of whom claim to support a “just transition” – hailed the news as an “historic victory” that was “truly enormous” and a “great week.” The cancelled pipelines meant thousands of lost jobs and millions of dollars in reduced economic activity and tax revenue.

Energy workers, especially labor unions, typically view “just transition” rhetoric as dubious. They recognize it means they lose their jobs, and decades of similar promises rarely if ever yielded the results that advocates claimed. Based on how advocates of a “just transition” keep marginalizing those workers’ hardships, could anyone blame them for their skepticism?

That the oil/gas industry is attempting to co-opt the generic term "energy" for its dirty fuel is repugnant, but understandable. Oil and gas have become dirty words because they make dirty energy.

Even before climate change awareness, your industry had a dismal record of laying everything to waste anything that stood in its path in pursuit of profit. But in 2021, there's no reason anyone should be proud of accepting money in exchange for fossil fuel - especially young people, who will have to live in the world it's created.

Fortunately, there are alternatives. An acquaintance, who had graduated with a degree in Petroleum Engineering and promptly secured a lucrative job in Houston, recently gave it all up - and went back to school to pursue a degree in nuclear engineering. Maybe it was a matter of conscience, or maybe she just wanted a job with a future.