As the weather turns colder, more Americans are relying on clean, affordable, reliable natural gas to keep their houses warm and cook family dinners during the holidays. That’s not what Massachusetts Institute of Technology researchers were thinking about in a new report on what they consider an “uncertain role” for natural gas in a clean energy economy.

Although the researchers concede that “natural gas use would still be a significant part of the energy mix” were wind, solar, and nuclear installations to be increased, they remain concerned about climate implications of methane leakage and practices like venting and flaring. Such concerns fail to take into account the fact that methane leakage rates are estimated to be far below the threshold for natural gas to maintain its climate benefits and the steps industry is taking to further reduce emissions.

Here are six facts to remember while reading:

Fact 1: Methane leakage rates are far below the threshold for natural gas to maintain its climate benefits.

Multiple studies have analyzed the lifecycle emissions of natural gas – from the well head to end use – to determine the methane leakage rate at which natural gas loses its climate benefits over other energy sources.

For instance, a 2019 study published in Nature found that as long as leakage rates stay below around 9 percent:

“The coal-to-gas shift is consistent with climate stabilization objectives for the next 50-100 years.”

Similarly, a 2015 study supported by work at Carnegie Mellon University determined that under a 100-year Global Warming Potential (GWP), the “break-even point for GHGs from U.S. LNG and coal electricity would be over a 9 percent fugitive emissions rate,” and under a 20-year GWP it would be around 6 percent. And another 2015 study by climate researcher Zeke Hausfather found:

“It would take a leakage rate of over 5.2 percent in the worst scenario (existing gas operating instead of new coal) and over 9.9 percent in the best scenario (new gas replacing existing coal) for natural gas to have the same average warming as coal over the 100-year period.” (emphasis added)

Meanwhile, estimates for actual methane leakage rates in oil and natural gas systems range from 1.1 percent to 1.65 percent, with one outlier study questionably placing them as high as 2.3 percent. But all of them fall far below the leakage rate threshold estimates above which natural gas would lose its climate benefits.

Over the past decade, the United States has replaced aging coal-fired generators with natural gas power plants. This shift has already led to the reduction of more than 2.8 million metric tons of carbon dioxide emissions since 2005, making it the largest source of energy-related carbon savings, according to recent EIA data. This is a 57 percent greater emissions reduction than wind and solar combined!

In fact, the switch to natural gas for electricity generation prevented 95 million tons of CO2 emissions in 2018, according to new data from the International Energy Agency. IEA found that, though increased global demand for energy increased emissions by 1.7 percent in 2018, “the increase in emissions would have been more than 15 percent greater” without natural gas.

Fact 3: Methane leakage is not out of control—it’s declining.

Since 1990, methane emissions from all stages of the natural gas production and distribution systems decreased by 14 percent.

These reductions are even higher in certain regions. New analysis by Texans for Natural Gas, the Permian Basin Petroleum Association and the New Mexico Oil and Gas Association found that in the past seven years, Permian Basin operators have reduced methane emissions intensity by nearly 64 percent. These declines come in part because of the very low rates of flaring. World Bank statistics show that flaring in the Permian Basin ranks 45th in intensity—behind other major producers like Russia and Venezuela.

Reducing methane losses due to leakage was also the focus of the 27th Annual World Gas Conference, where more than 10,000 stakeholders discussed how to develop and implement new technologies to better monitor and address the issue. These voluntary industry efforts have been successful. The Environmental Partnership– a voluntary group of roughly 65 leading oil and natural gas production and transmission companies –repaired 99 percent of identified methane leaks within 60 days in 2018.

Though the MIT study acknowledges that “methane is a valuable commodity and therefore companies…already have some incentive to minimize its losses,” the report largely discounts these significant leakage reductions.

Fact 4: American emissions have fallen faster than global emissions—in part because of the switch to natural gas.

Since 2005, the United States has become a global leader in carbon reductions, cutting annual CO2 emissions by 758 million metric tons by 2017. This is the largest decline of any country in the world and largely reflects the shift to natural gas as a fuel for power generation. 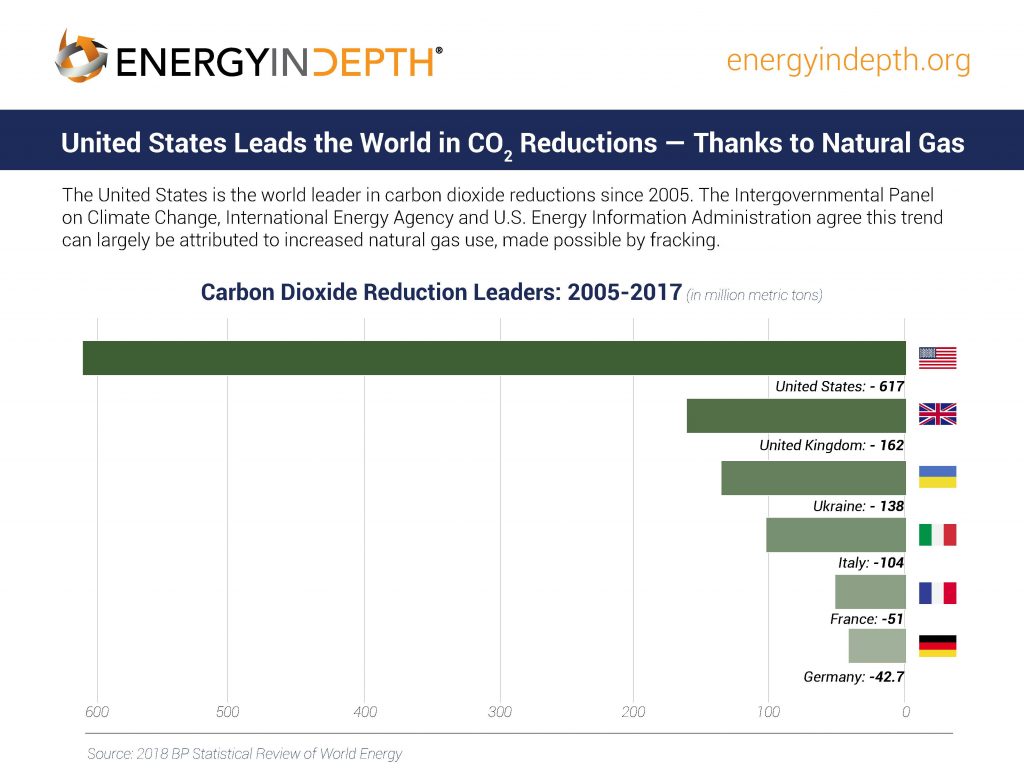 Fact 5: Investment in energy infrastructure will continue to pay off in the future.

Today’s energy infrastructure investment will shape the energy landscape of the future. The authors of the MIT study are hesitant to encourage additional investment in improving natural gas infrastructure that could reduce methane leakage because these investments “might see limited used beyond the next couple of decades.”

But the stranded assets argument ignores the forecasted growth in energy demand. Given current policies, IEA forecasts that global energy demand will grow by about 1.3 percent annually through 2040, and much of this growth will be met with natural gas. The report explains that the United States is expected to represent 30 percent of natural gas growth through 2030, as demand increases in Asia, Europe and Africa.

Fact 6: The conclusions of the press release don’t match the study’s finding.

MIT’s study actually offers a constructive critique of natural gas, recognizing the role it has played in reducing carbon dioxide emissions, and pointing out ways in which the industry can continue to reduce emissions through monitoring and investment in new equipment. But a reader wouldn’t get that from the press release.

For instance, the researchers write that policies were effective in reducing carbon monoxide emissions in the past, suggesting that a similar approach could also work to bring down fugitive methane emissions:

“One past example of success in monitoring and mitigating point source emissions, including from older, high-emitting equipment, is the reduction in carbon monoxide emissions from vehicles.”

But the press release discounts this, instead highlighting the uncertainty surrounding attempts to lower emissions and implying that this would make monitoring and reducing prohibitively difficult or expensive. The release states with authority:

“The actual leakage rates associated with the use of methane are widely distributed, highly variable, and very hard to pin down.”

In fact, the industry has already worked to reduce methane leaks throughout the supply chain, a process that will only improve with increased infrastructure investment. Unfortunately, without reading the entire study, readers are unlikely to learn that.