There are 2 "E"s in Pipeline Over the past decade Conventional and Renewable Energy staked positions across the aisle in business just as Republicans and Democrats have squared off in Washington DC. From subsidies to fracking and New Green Deal vs Energy Dominance, rarely could both energy sectors get on the same page. But in the past 12 months there has been a thaw (insert your own climate joke here) in the natural gas pipeline space.

Williams Companies and Energy Transfer have both announced initiatives integrating solar PV into their energy supply mix. Williams announced they will combine the electrification of their compressor fleet with solar energy installations within their field operations . Energy Transfer has also embraced solar through a 15 year power purchase agreement with solar developer Recurrent Energy.

While the majors pursue Big Ticket environmental projects like offshore wind and carbon sequestration to bolter the "E" and "S" in their Environmental-Social-Governance (ESG) scores these two midstream organizations have committed to lessening their climate footprint and growing local jobs via solar. I think the time has come for more collaboration like this to deliver a greener barrel and cubic foot. We possess the innovation and capabilities to make the "Energy Transition" good for platers in both conventional and renewable energy production.

Williams announced they will combine the electrification of their compressor fleet with solar energy installations within their field operations .

I assume these will still be connected to the grid as well-- but will they perhaps integrate energy storage to maximize the amount of time they can operate in isolation? Or even to sell energy back into the grid if the situation arises?

Thanks for sharing, David!

I don't know what Willams' actual plans are, but including battery energy storage would certainly make sense. Pipeline compressors don't consume all that much power, but they need to be reliably available nearly 24/7. If they relied on grid power whenever the solar panels weren't producing, they would need to include some provision for contingency backup power in case of grid outage.

Batteries could provide that contingency backup, while allowing solar to supply 90% or more of all energy to the compressors. By being grid-connected and sharing energy storage on the grid, they'd also provide the pipeline company with a synergistic revenue stream for ancillary services.

By being grid-connected and sharing energy storage on the grid, they'd also provide the pipeline company with a synergistic revenue stream for ancillary services.

Now you're speaking their language and underscoring perhaps the real motivation, rather than the sustainability 'do the right thing' idea. But hey, motivation matters much less than results!

Batteries would certainly improve reliability. As is always the case the economics drive the scope, the compression would need to be near population/load to pay out, most stations are remote. Another factor is utility receptivity to solar (see net metering) and independent development. Keeping solar competitive works best for all parties.

Not surprisingly, the vast majority of gas compression is gas fueled.  Many of these locations do not have good access to quality power and of course they have quality fuel right at the location.  The scale of the existing pipeline, not including most gathering nor gas treatment could suprise many - over 3500 compressors and 20 million HP, over 15 GW of electrical power.  I would doubt that most compressor stations have the area available to install solar PV at the scale that is needed.  Also this is base load operations which would lead to some very large battery storage solutions.  Energy storage would be more useful at locations where there is more variation in load.

All valid points Gary, not all compression sites will work. I think the key for energy transition is to start with what WILL work and grow from there. I can remember being told in the 1990s that wind generation was coming to USand I scoffed, replying that only works in high commodity price markets in Europe, we now know the "rest of the story". For oil & gas companies (like Williams and ETC) ESG does matter in attracting investment, pushing firms to innovate and demonstrate willingness to lessen environmental impact.

Warren Buffett, as he did with so many other investments, saw the writing on the wall when he told a group of investors in 2014:

"I will do anything that is basically covered by the law to reduce Berkshire's tax rate," Buffet told an audience in Omaha, Nebraska recently. "For example, on wind energy, we get a tax credit if we build a lot of wind farms. That's the only reason to build them. They don't make sense without the tax credit."

After $billions of dollars in investment wind now provides a whopping 7.3% of U.S. electricity, barely making a dent in U.S. CO2 emissions. And with the Investment Tax Credit ending in 2022, now might be a good time to get out of the market.

Looks like an investor would have been right to scoff in the 1990s - and even more so, now (wind, below, is shown by the brown line creeping along the x-axis). 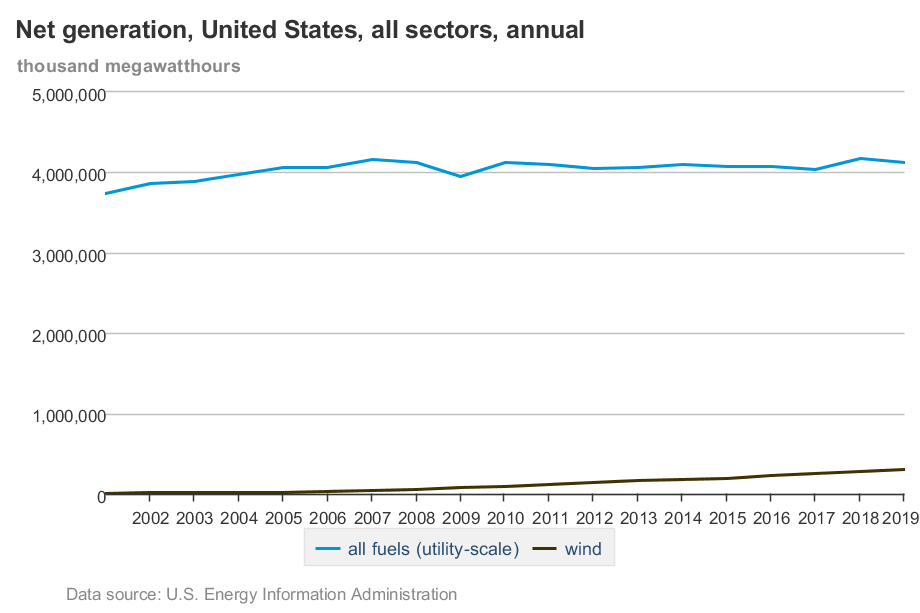 David - the big focus for gathering and pipelines is now methane.  The challenge with existing gas transmissions pipelines is that their customers will have to pay for the upgrades, highly regulated.  At some point they may become big proponents of electricity if they can get a rate of return on the added investment, the challenge wil be the fact that they are investing in moving a product that some think we do not need - natural gas.  The time horizons are different than for the electricity monopolies who are making the case for all carbon free energy and hoping that the regulators will allow them a return on the transition.

Enbridge has embraced energy transition too!