Not quite sure why 'tension arises' as per the headline but remainder of article may interest the community. 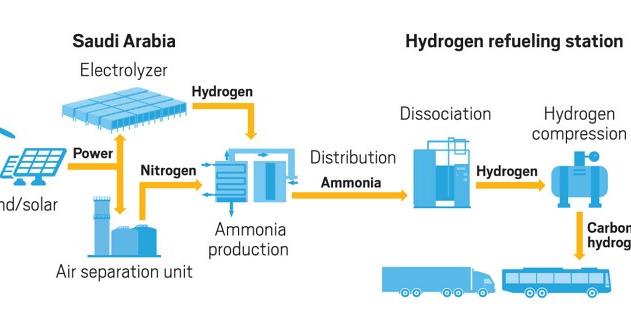 The new hydrogen economy - a practical guide for market entrants |...

"Not quite sure why 'tension arises' as per the headline..."

Charlie, the article explains why:

"The EC proposes cofunding any blue hydrogen project in which roughly 90% of the CO2 is captured and stored. But such a policy would be a “huge mistake” because it would divert resources from green hydrogen, according to the European Environmental Bureau, which represents more than 140 environmental organizations across Europe."

I suppose tension arises because truly clean and fossil-free hydrogen, supported by 140 environmental organizations across Europe, is an unsupportable fantasy:

The tension, apparently, is between proponents of blue vs. green hydrogen in the EU. Green hydrogen proponents want all of the EU hydrogen-related subsidies to be devoted to electrolytic (green) hydrogen. They don't want any funding diverted to support CCS and blue hydrogen.

The proponents of green hydrogen are the wind and solar industries along with manufacturers of electrolysis equipment. So of course they'd like to have all the subsidies sent their way. But that's a foolish, counterproductive position, in my opinion.

For economic reasons, facilities for producing green hydrogen will draw power primarily from the grid. Given the inefficiencies of electrolysis and the current mix of generation resources on the grid, production of green hydrogen will actually consume more coal and natural gas than reforming would. And none of the carbon emissions will be captured and stored. If restrictions are imposed to limit electrolysis to periods where there are surplus supplies of wind and solar energy available, the cost of production will be too high and the volumes too low to seed the applications hydrogen needs in order to succeed.

I suspect there would be far more tension if there was no support and nothing to go at for the nascent hydrogen industy.  The European announcements give both blue and green plenty to go at.

The good news for the hydrogen fuel industry is 1) a major fossil fuel player (in Saudi Arabia) thinks it's real enough to be investment worthy, and 2) the technology mix is moving towards having an ammonia component.

I've always said that any forecasts that assuming the fossil fuel industry will disappear in our lifetime is nothing more than wishful thinking.  Fossil based H2 with CC&S provides a scenario in which fossil fuel companies can co-exist with a low emissions future. The economics may work out, since the product is made from one of the cheapest fuels (fossil gas), and would compete against more expensive fuels (gasoline and diesel), plus it would have the market appeal of being blended with some portion “made from sunshine”.

Any system that wants to have a significant portion of the H2 produced using off-peak clean electricity has to have a seasonal energy storage capability, since demand for electricity is highly seasonal in places that comprise most demand.  Ammonia is much easier to store (and transport) than H2, so it is a better choice for that seasonal component in many locations.

The ammonia solutions that seem closest to market utilize ammonia-to-hydrogen converters at hydrogen refueling stations, which substitute truck delivery of liquid ammonia for any sort of hydrogen delivery.  So the green H2 folks will have to come up with their own distribution system, or get on board the ammonia train.

I also find it ironic that the two examples in the graphic of H2 end-users, trucks and buses, are also examples of potential end users for ammonia as a carbon-free fuel (because they have professional operators who can be trained to handle such a toxic fuel safely).  Ammonia can be burned with around 50% efficiency in specially optimized internal combustion engines, so these applications can use ammonia directly and avoid the cost of fuel cells and inconvenience of H2 storage.c

Great points about the applications where ammonia can help supplement a hydrogen economy-- we talked about that with John Armstrong in the Energy Central podcast, for anyone interested: https://energycentral.com/c/cp/power-perspectives%E2%84%A2-podcast-episode-13-%E2%80%98can-green-hydrogen-lead-us-green-ammonia%E2%80%99

I hadn't thought much about the difference in using ammonia, or even hydrogen, specifically in vehicles that have trained drivers rather than just the common everyday person. That would certainly provide another level of safety, though would it necessarily alleviate the perceptions and fears that some still associate with hydrogen gas and its perceived dangers?

I had a college professor who lamented, "if we didn't already drive gasoline cars, the public would never accept the safety case for gasoline, given the scrutiny applied to alternative fuels".  Anyone old enough to remember the early days of fuel-injected car engines will be familiar with the site of flaming cars on the side of the road.

Fortunately, neither hydrogen nor ammonia have accident scenarios that leave such an impressive visible result, although the three fuels are said to have similar safety levels.

I would think the fact that trucks and buses live outdoors, and therefore don't have a risk of leaking vapors building up in enclosed spaces would help H2 and ammonia (not explosive but toxic).  But the professional handling would mainly help with toxic fuels like ammonia and methanol.

Fortunately, neither hydrogen nor ammonia have accident scenarios that leave such an impressive visible result, although the three fuels are said to have similar safety levels.

Such an interesting idea that really permeates a lot of energy topics-- it's as much about perception of safety than it is the actual safety when it comes to tech being adopted!

Michael commented on ...
100% Clean Electricity by 2035?
Fundamentals of mathematics and computer computation do not support the veracity of the climate models.

John commented on ...
100% Clean Electricity by 2035?
I posted my responses below yesterday in a screaming panic (late for an appointment).

Mark commented on ...
New study shows that renewable energies significantly reduce electricity prices
Thanks Simon. I would be shocked if the results were much different. But with the data you have is it possible to ask the same questions with,...