On the sudden stratospheric warming and polar vortex of early 2021 | NOAA Climate.gov

ARE POLAR VORTEX BLACK SWAN EVENTS: What we can learn from recent Texas crisis?

The disaster began with disruption of polar vortex; the west to east circulation of air around the Arctic. On 5 January there was a sudden stratospheric warming: a sharp increase in temperatures that caused the flow of winds to slow and ultimately change direction. That allowed cold polar air that had been bottled up over the Arctic to escape and flow down across the US.

The trend in sudden stratospheric warming is flat since 1970s, this gives false sense of security to the planners that these are black swan events, and provide reason to cut cost a very high price as we saw recently in Texas. In fact these events, are not rare, and  occur on average about six times a decade, although they do not always cause the southward rush of cold air that we have seen in the past week.

The event resulted in approximately, 1.8 bcf/day of gas going offline, a staggering ~ 20% of US gas, as a result gas price in some places spiked from $3.0/mmbtu to $1250/mmbtu.  Production freeze-offs, caused by water and other liquids freezing and blocking the flow of gas out of the wellhead, started spreading as temperatures dropped. According to Ed Crooks, VP at Wood Mackenzie; "The wellheads in Texas were not well prepared for freezing conditions." Dropping temperatures, freezing of some wind turbines and eventually a nuclear plant going offline complicated the crisis. The absence of link between Texas and national grid, made the matter worst.

Water dew-pointing in oil and gas equipment is one of the many solutions available to avoid freezing of oilfield and production equipment at much lower cost, then what we incurred in recent crisis!

On the sudden stratospheric warming and polar vortex of early 2021 | NOAA Climate.gov

A rapidly warming stratosphere and swirling polar vortexes, oh my! What is going on so far this winter? Three stratosphere experts help us sort it out. 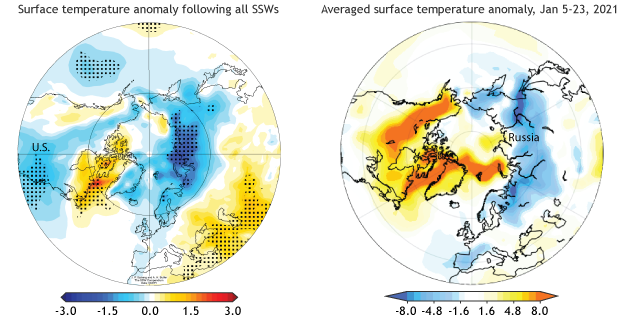 UK Low Carbon Hydrogen Standard
What is the difference between FCEM and AOCE
Social cost of co2 emission
What aspect of the IRA may be the most critical? A hint: it isn’t the ITC or PTC.