Natural gas has played the leading role in reducing carbon emissions in the United States during the past 15 years and is now supporting a durable and reliable electric grid during the buildout of electric vehicles, according to members and witness at a Senate Environment and Public Works Committee hearing held on Wednesday focused on American energy security and climate solutions.

Sen. Dan Sullivan (R-Alaska) utilized a chart displaying the emissions increases and reductions of several major global economies between 2005 and 2020. The results were unmistakable: the United States reduced its CO2 emissions by 970 million metric tons during that period – more than any other major economy in comparison. 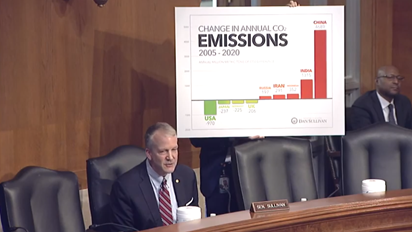 Sullivan then asked the witnesses testifying what caused the drop in emissions, and Kathleen Sgamma, president of the Western Energy Alliance said that the unequivocable answer is the U.S. shale revolution, which boosted the use of natural gas in America’s energy mix:

“A realistic approach is to recognize that the increased use of natural gas in the electricity sector has already been the [emissions reduction] equivalent of 190 million EVs on the road.”

Katherine Stainken, VP of Policy at the Electrification Coalition, also highlighted the buildout of renewables during that time period, but Sgamma pointed out that natural gas was the main contributor to the country’s reduced emissions:

“In the electricity sector, fuel switching to natural gas has reduced more greenhouse gas than wind and solar combined. We’ve reduced about 3.5 billion tons of GHG emissions compared with about 2.1 billion by renewables, and we did that without incentives, without subsidies, we did that through market investment and increased production of natural gas.”

The development of renewables is also reliant on natural gas to provide dispatchable power with the Washington Post calling natural gas the “secret friend” and reporting:

“Because these sources of electricity generation are ‘intermittent’ — solar fluctuates with weather and the daily cycle, wind fluctuates with the wind — there has to be some means of continuing to provide electricity even when they go dark. And the more renewables you have, the bigger this problem can be. … Solving that problem has ironically involved more fossil fuels — and more particularly, installing a large number of fast-ramping natural gas plants, which can fill in quickly whenever renewable generation slips.”

Senators from both parties touted the positive climate impacts of EVs. But even committee Chair Sen. Tom Carper (D-Del.) observed that EVs are not going to overtake internal combustion engine vehicles in the near future, showing the need for a strong oil sector as part of America’s energy security:

“We’re not going to switch to electric vehicles overnight. We’re going to be driving vehicles that use liquid fuels for a long time. That’s the reality we live with. … We’re not in a post-liquid fuels world.”

Additionally, EVs are only as clean as the energy sources they consume, and natural gas will be an essential and reliable component of electricity generation today and into the future.

Jim Matheson, a former Democratic Congressman from Utah and now CEO of the National Rural Electric Cooperative Association, also emphasized the need for a broad energy mix and touted the emissions reductions from natural gas:

“The ongoing energy transition must recognize the need for time, technology development, and be inclusive of all energy sources to maintain reliability and affordability. Achieving 100 percent carbon free electricity generation by 2035 is simply an overly ambitious goal. American consumers expect the lights to stay on at prices they can afford. A diverse energy mix is essential to meeting those expectations day in and day out. … Natural gas is playing an increasingly important role in co-op emission reductions.”

So, regardless of how many EVs are built, purchased, and driven, it’s highly likely that they will run on electricity that’s been generated by natural gas for decades and that the fuel is supporting a reliable electric grid.

Yet, while many Democrats on the committee held up EVs as a key to reducing emissions, they also dismissed the industry’s concerns regarding the administration’s posture towards domestic oil and natural gas development.

“In my judgement there is price gouging going on. We have 9,000 approved leases that we aren’t using. So, in fact, if supply production does relate to prices, let’s use the leases – let’s produce more.”

As Energy In Depth recently pointed out, the “9,000 leases” statistic doesn’t tell anywhere close to the full story, as a lease approval is just the first step in the lengthy, capital-intensive process that turns a lease into an operational well, and the Biden administration and environmental activist groups have slowed down the process.

Moreover, accusations of price gouging have been dismissed from top experts, including officials at the Dallas Federal Reserve Bank, academics, and energy analysts like Bob McNally at Rapidan Energy and Nicole Petersen at GasBuddy.

Sgamma also pointed out that stalled permit applications and underfunded infrastructure (often the result of activist protests and lawsuits) has prohibited the industry from developing the infrastructure that captures methane and transmits natural gas to customers, including electric power plants:

“Flaring is significant when you don’t have the infrastructure to transport your natural gas. If we can’t capture that methane, we can’t put that well in place. Lack of pipeline capacity is holding us up.”

Sgamma outlined several steps Congress and the Biden administration could take in order to allow domestic production to meet demand in the U.S. and abroad:

“We need to stop the over-regulation of the industry that is meant to get to an answer of ‘no’. Move forward with pipelines, LNG terminals, so we can export greenhouse gas emissions reduction to the rest of the world.”