Radon is the second leading cause of lung cancer in the United States and is found in high concentrations in homes, schools and businesses across the country. Despite its long prevalence in regions such as Appalachia, researchers continue to attempt to link the gas, and its known health impacts, to more recent unconventional oil and natural gas development.

Harvard University researchers this month claimed that “fracking development” or unconventional oil and natural gas development (UOGD) may be associated with increased radioactive particle material (airborne radon) that “may cause adverse health outcomes in nearby communities.” It’s a finding that faced significant criticism from the study’s peer-reviewers, which included Seth Shonkoff – the activist who wrote a 2012 memo encouraging anti-fracking groups to connect health problems and fracking even when no evidence existed to support the claims, yet also recently admitted:

One anonymous reviewer even completely rejected the first draft due to “many conceptual errors” and the fact that the study’s conclusions were not demonstrated. In fact, three of the five peer-reviewers took issue with the study’s claim to have shown a potential link between the proximity of oil and natural gas development with health impacts, suggesting according to the authors, that “even though [the increases in radon] are measurable, may be too trivial to cause any health or environmental effects.”

Even Joan Casey, who was the lead author on a previous flawed oil and natural gas radon study and part of a team that has tried to link fracking to multiple health ailments including depression, expressed concern that this conclusion “is strongly worded and implies causality.”

Another anonymous reviewer repeatedly questioned this finding, calling it his “greatest area of concern within the paper” and explaining to the authors that “the maximum elevation in activity reported in the present paper is negligible” and “this is a bold claim and the data presented do not support this.” He eventually approved the manuscript, but not because he felt the finding was fully demonstrated:

“Reviewer #5 (Remarks to the Author): I am still not convinced by the suggested health impacts, but the authors have at least toned down their statements in relation to this. I think it appropriate that this manuscript is now published so that others can then read and judge for themselves.”

The author’s response to this reviewer is perhaps the most telling statement in regard to the manuscript:

“Reply: Thank you for your approval. I totally understand your skepticism of the health effects of UOGD through particle radioactivity. You’re far from alone. In the revised version, I further tone down the statements and admit that more field measurements are needed to validate this exposure pathway. (Lines 319-321)” (emphasis added)

Despite this admission, after publication, one author told the Guardian:

“If you asked me to go and live downwind [of fracking sites], I would not go. People should not go crazy, but I think it’s a significant risk that needs to be addressed.”

Here are three additional things to keep in mind when reading this new study:

Fact 1: The study’s findings do not show statistical significance of increased radon.

Despite the strong statements the authors made to media, their work does not actually demonstrate that homes and businesses near unconventional oil and natural gas development are exposed to higher levels of radon as a result of this proximity. In fact, as Casey mentioned in one set of her edits, in the Bakken higher levels were found farther from the well sites and there was no statistical significance for the Marcellus findings:

“Related to sub-regional analyses: Line 349: how do levels of uranium differ by the three regions? Any explanation for the larger coefficients at the 30 and 35 km radii in the Bakken? While the authors conclude that there’s not much going on in the Marcellus, the point estimate is large (though not statistically significant) for the 20km radius. A bit more discussion would be helpful as this paper will certainly garner media attention. If distance to RadNet sites explains the lack of an association, what was the average distance between wells and RadNet sites in the Marcellus compared to the other formations?” (emphasis added)

The only region where researchers potentially estimated statistical significance was in the Permian, but the reviewers still did not see this “negligible” increase as enough to impact health. From Reviewer #5:

“What matters when relating radioactivity to a biological endpoint is dose (radiation energy absorbed within biological tissue). The authors may argue that the difference is whether or not the activity is particle bound, but the reported negligible potential elevation in radioactivity will make little difference to the total dose to an individual. Even if we were to (i) approximate the slight elevations in alpha and beta emissions that may also have been identified if the authors had considered these, and (ii) apply radiation weighting factors to account for the relative biological effectiveness of these different emitters to enable the potential increase in equivalent dose to be calculated, the change in dose would still be negligible. Why then are the authors proposing significant harm from a negligible elevation in dose? Looking at the references used in the paper to support the statements around the health impacts of particulate bound radioactivity, the three studies cited were all conducted by the authors of the paper under review here.” (emphasis added)

Researchers did not conduct their own sampling for this study, but instead relied on the  Environmental Protection Agency’s radon monitoring network, RadNet, which in their own words both strengthened and limited the study. On the one hand, it allowed for them to view data from long-term monitoring, including prior to shale development. On the other, this limited the number of monitors that fit the study’s parameters of having wells within 20 to 30 kilometers.

For instance, the authors explain:

The Marcellus-Utica region had similar findings:

“In the Marcellus-Utica subregion, we found no evidence of a statistically significant association between upwind UOGD wells and downwind PR for any buffer distances investigated. … However, when the buffer radius is 20 km, the impact of additional 100 UOGD wells in Marcellus-Utica subregion (0.180 mBq/m3, 95% CI: −0.031 mBq/m3, 0.390 mBq/m3), though not significant, was greater than the impact in the other two subregions.” (emphasis added)

In fact, when using Pa. Department of Environmental Protection data to compare the location of the monitoring site in Bloomsburg, Pa. with the zip code for Hughesville, where nearby natural gas wells are located, Bloomsburg had higher results for first floor radon from January 1990 through December 2016. This includes the time period when the majority of any nearby wells, if not all of them, would have been drilled and completed.

Fact 3: The United States has a historic radon problem, including in shale-rich states.

Radon is an issue in many parts of the country, and one that started long before shale development. As the EPA explains:

“Radon comes from the breakdown of naturally occurring radioactive elements (such as uranium and thorium) in soils and rocks. As part of the radioactive decay process, radon gas is produced. The gas moves up through the soil to the surface, where it can enter homes, schools and the workplace through cracks and other holes in the foundation. In some cases, radon can enter buildings through well water and come from building materials. Any home can have a radon problem – old or new homes, well-sealed or drafty homes, and homes with or without basements.” 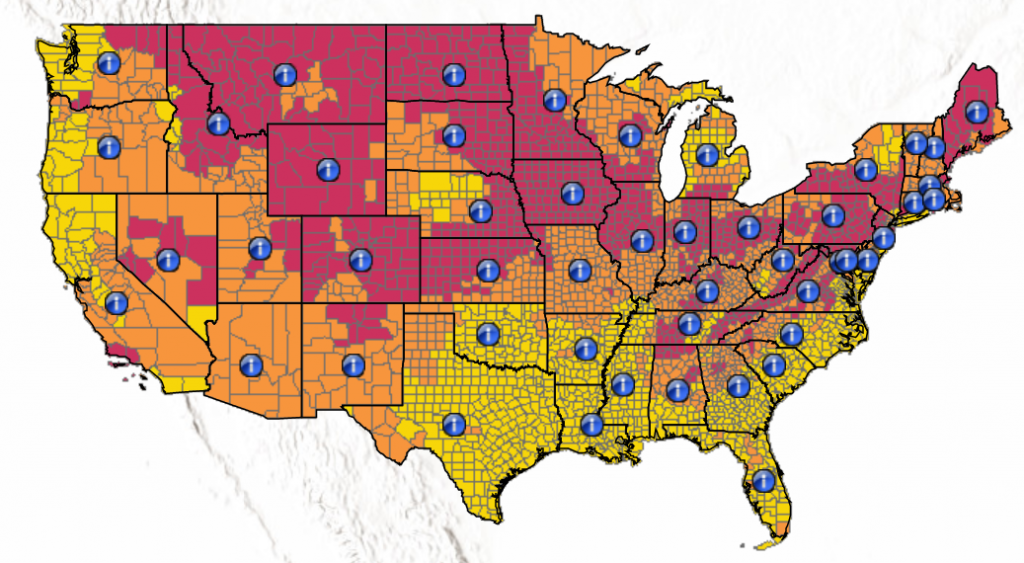 According to the Pa. DEP:

“Pennsylvania has one of the most serious radon problems in the United States. Approximately 40 percent of Pennsylvania homes have radon levels above Environmental Protection Agency’s action guideline of 4 picocuries per liter.” (emphasis added)

And the locations of where that radon is most prevalent has not changed much since EPA first began mapping the gas in 1993.

Notably, some of the highest concentrations in the state are in areas with absolutely no oil and natural gas development, as Morning Call reported in 2016:

“The highest level of radon ever recorded in Pennsylvania was found in a newly constructed house in Center Valley, the state Department of Environmental Protection said Thursday. In October, a reading of the carcinogen showed a level of 6,176 picocuries per liter, more than 1,500 times higher than the recommended limit of 4 pCi/L set by the U.S. Environmental Protection Agency.”

Colorado, where the monitors were located for the study’s expanded 30-kilomenter buffer in the Bakken-Niobrara region, also has incredibly high instances of radon. As RDS Environmental explains:

“Colorado is known as Zone 1 when it comes to the presence of high radon gas levels. Nearly 73 percent (that is every 3 out of 4 homes) of all homes in Colorado have high levels of the gas.”

Pikes Peak – without oil and natural gas development – has the highest instances of radon in the state because of the high concentrations of uranium found in the ground there. As Katherine Lemon, a public information specialist working with the Colorado Department of Public Health and Environment’s Hazardous Materials division, told RDS Environmental:

“The geological makeup of the entire Colorado state includes huge deposits of granite and naturally occurring uranium, making it a perfect breeding ground for radon.”

Radon is a serious health concern across the country, but this was the case long before shale development. As such, there are a multitude of potential upwind sources that could be, and likely are, contributing to the radon identified by the RadNet monitors.

This study’s peer-reviewers agree that the researchers were unable to link health impacts from radon to nearby well development – a fact that should be conveyed in coverage of it. At the end of the day, this study is not sufficient as a stand-alone publication because the preliminary nature of the data makes it difficult to draw conclusions.

If you live in a state with historic radon issues, you can reach out to your state environmental regulators to find out more information on testing and mitigation.