The return of Iranian oil; and what this means for the international markets. There is a phrase in Persian - “Moshtâghe didâr”, which means “I’m eager to see you”. And the oil consuming world, today more than ever, earnestly bids Moshtâghe didâr to Iranian crude!

Iran’s significance in the crude trade, can be gauged from the fact that despite a stellar bull run since the start of this year, a possible delay in unravelling of ongoing Iranian sanctions sent prices even higher on this week. Crude has been climbing steadily since the beginning of 2021, with Brent up by 38% this year and West Texas Intermediate (WTI) by nearly 43%. Prices, however, nudged upwards of US$ 75/ barrel after a top US diplomat said that even if the United States were to reach a nuclear deal with Iran, several US sanctions on Tehran would still remain in place, thereby dashing hopes of an immediate return of Iranian barrels in the market (see Fig I) 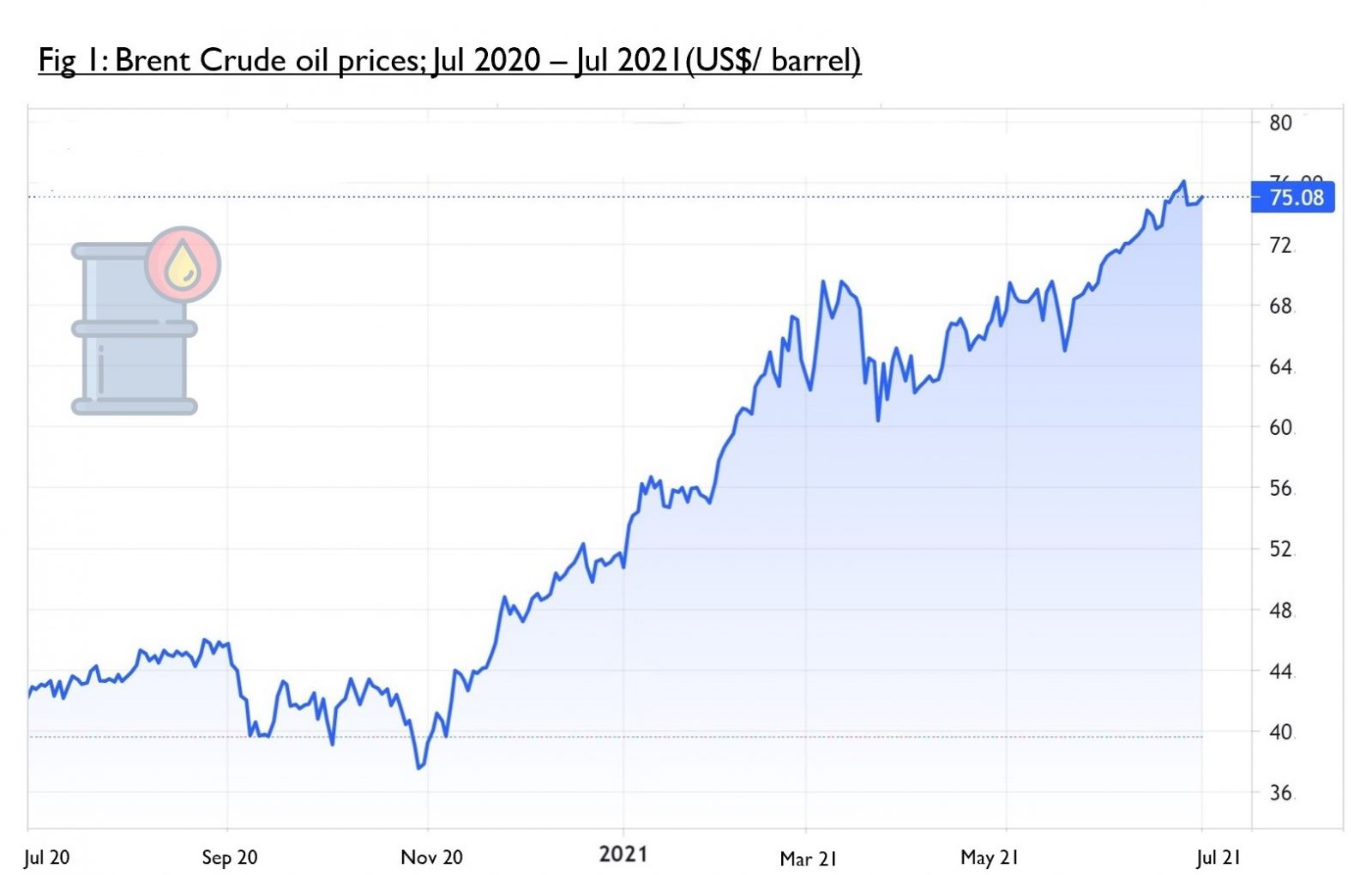 Antony Blinken, US Secretary of State, remarked that "I would anticipate that even in the event of a return to compliance with the JCPOA (Joint Comprehensive Plan of Action, 2015), hundreds of sanctions will remain in place, including sanctions imposed by the Trump administration."

Iran (then Persia) was the first country in the Middle East where oil was discovered when William Knox D’Arcy drilled for, and discovered commercial quantities of oil at Majid – i – Suleiman, in 1908. Petroleum has been the primary industry in Iran since the 1920s and with nearly 208 billion barrels of proven reserves of oil, and 34 Trillion Cubic Feet of gas, the country is an important, but fickle, player in the hydrocarbon world.

For almost a century thereafter, Iran has had a vacillating relationship with the West over handling of its domestic oil industry, touching a low when Prime Minster Mosaddegh nationalised the Anglo-Persian Oil Company (AIOC) in 1951. The bonhomie with Iran was ephemeral during the Shah’s regime in the 60’s and 70’s but hit its nadir after he was ousted in the 1979 Iranian Revolution. Since then, there have been sporadic periods of relative equanimity, but largely interspersed by distrust, bickering, rumourmongering and threats – emanating from both sides.

After years of intense negotiations, Iran, the P5+1 (UN Permanent 5 + Germany) and EU agreed on the JCPOA which provided Iran substantial relief from previously imposed sanctions, and in return the country agreed to pull back on its nuclear program and allowed access to UN inspections at select nuclear installations.

However, this too was short lived, and almost three years later, in May 2018, the Trump administration announced that the US would unilaterally exit from the JCPOA. This, then, led to a staged re-imposition of all nuclear sanctions against Iran, including debilitating curbs on its oil & gas industry.

The US administration had aimed to reduce Iran’s oil revenues and as a result the country’s crude exports fell by almost 90% from 2.3 million barrels per day (mm bopd) at the beginning of 2018 to a mere 260,000 bopd by October 2019.

While the sanctions were reintroduced in May 2018 and came into full force in November 2018, it was only by May 2019 that Iran felt the full brunt of these economic restrictions. This is because the temporary sanctions waivers (so called significant reduction exemptions; SREs) that had previously been issued to eight importers of Iranian oil including China and India (accounting for 71% of the total exemptions - 360,000 bopd and 300,000 bopd respectively) expired that month and were not renewed.

This had a devastating impact on Iran’s oil production and exports, preventing much-needed investment in the country’s ageing fields and barring it from “legally” exporting crude oil to global customers. Exports of Iranian crude have, thus, hovered around the 1 mm bopd mark since 2019 (see Fig II).

With Trump out of power, recent reports suggest that Iran is ramping up its hitherto stalled oil production in anticipation of favourable treatment from the newly elected Biden Administration, and a possible return to the JCPOA as originally agreed upon in 2015. President Biden is seen to possess a kinder disposition towards Iran than his predecessor, and as a candidate, had pledged a return to a 2015 nuclear pact with Iran.

It is thus no surprise that the country pumped 2.3 mm bopd in March, according to the IEA, which was its highest production level since May 2019, when the Trump administration imposed a full embargo on international oil sales.

So, what does Iran’s return to the oil markets mean, and what impact will readily available Iranian barrels have on the oil price?

Even if Iran and the US, along with the original P5+1 and EU decide that they wish to revert to the pre 2018 status-quo, implementing the JCPOA today will not be easy. Both the parties, at least publicly, differ on the issue of imposed sanctions and there already is disagreement over the modalities of lifting of the underlying restrictions: Iran insists on having a final say for verifying whether sanctions are no longer in effect, whereas the US refuses to assess compliance based purely on Tehran’s green signal. 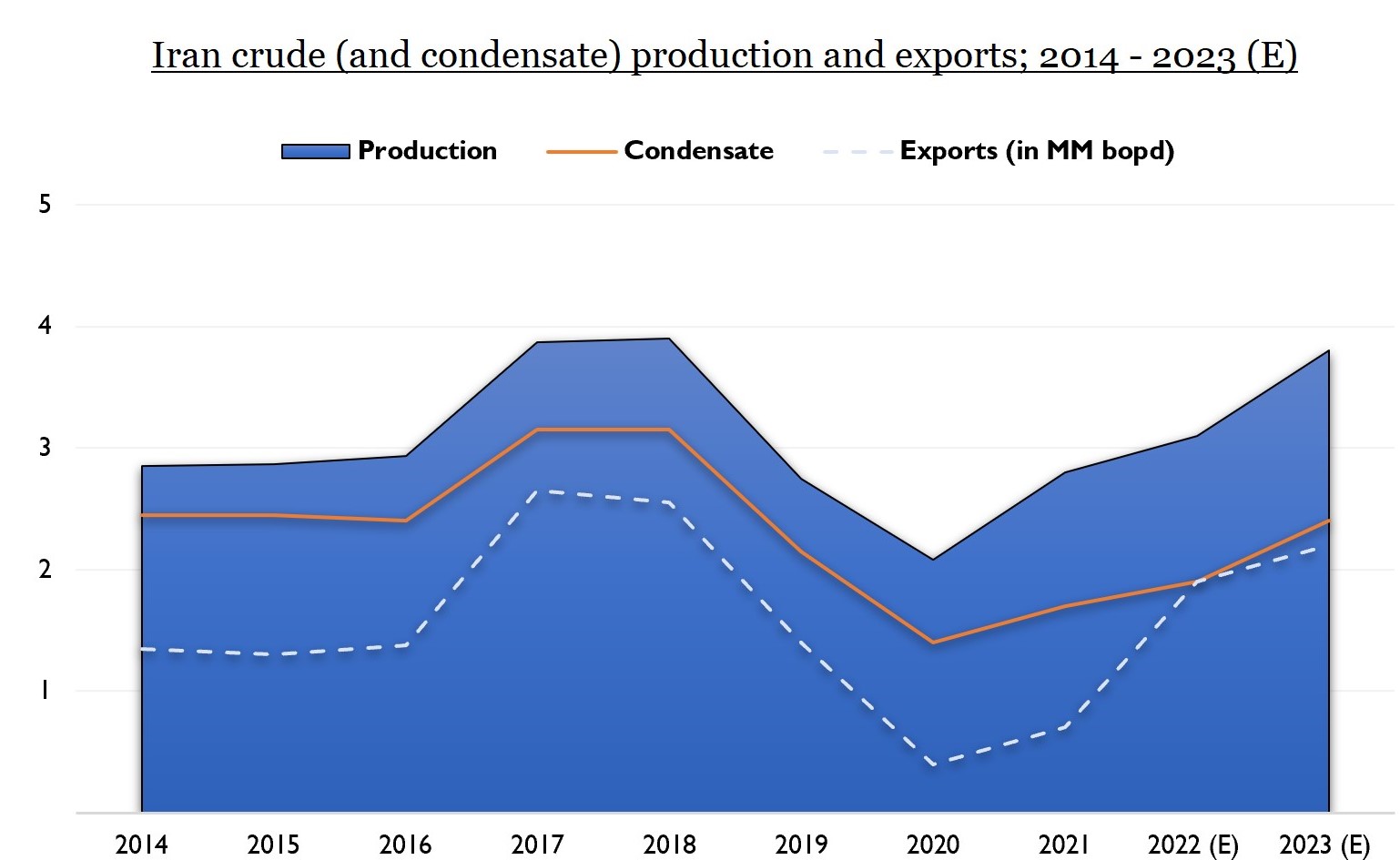 Negotiations are bound to become even more arduous when dealing with the core issue of the JCPOA and indeed the very bone of contention between Iran and the West; Iran’s nuclear program. Under the JCPOA, Iran had agreed to eliminate its stockpile of medium-enriched uranium, cut its stockpile of low-enriched uranium by 98%, and reduce by about two-thirds the number of its gas centrifuges. Additionally, for the next 15 years, Iran would only enrich uranium up to 3.67%. It is unlikely that the country has remained true to these pledges in the past three years, or if it would agree to a more stringent scrutiny of its existing nuclear facilities.

However, there now is a marked eagerness from all sides to come to an agreement which has some semblance to the 2015 nuclear deal, and one that would allow Iran to re-renter the international market.

Based on a number of different parameters, we think a best-case scenario could unfold around the end of this year, by which time a new government would be in place in Tehran (Presidential elections are to take place this week) to execute Iran’s negotiated return to the JCPOA covenants, albeit with minor changes.

In such a scenario, some sanctions relief would accrue in 4Q 2021 with full set of withdrawals coming into effect only by Q2 2022. This would be mirrored in the Iranian oil sector and production is expected to accelerate by Q4 2021 with an additional 300,000 bopd coming onstream in end 2021 to reach 2.9 mm bopd – nearly 600,000 higher than March levels. Output would then gradually increase through the first half of next year, with a possibility of returning to 2018 pre-sanction levels of 3.8 mm bopd by H2 2022.

Tellingly, over the last two weeks, Tehran has released various statements outlining plans to significantly increase its oil volumes, initially very quickly from key fields in West Karoun – comprising the biggies of North Azadegan, South Azadegan, North Yaran, South Yaran and Yadavaran - which together are estimated to hold around 67 billion barrels of oil in place.

On the price front, an additional one mn bopd of Iranian crude flowing into the market has the ability to pare off between 3 to 5 dollars from the cost of each barrel of oil. Most analysts thus expect prices to hover around the US $ 65 – 72 per barrel range in 2021 and 2022, providing a counterweight to market tightness expected as the world comes out of Covid induced slowdowns and industrial activity beings to pick up pace across the world.

A world with surplus Iranian oil bodes well for consumer countries like India, which rely heavily on imported crude, and can ill afford high crude prices which discordantly impacts their fiscal mathematics.

Moshtâghe didâr, it is for those much awaited Iranian barrels

A world with surplus Iranian oil bodes well for consumer countries like India, which rely heavily on imported crude, and can ill afford high crude prices which discordantly impacts their fiscal mathematics.

For these reasons, this is surely a welcome sign for many in the market. But on a longer-term outlook, has the past year+ changed the Iranian view of the certainty of oil markets and how strongly they'll be committed to them for the future, or has it brought about more of an urgency to diversify its energy resources and economy?