The petroleum trade between the United States and Canada doubled from 2010 to 2019 – a surge that was powered by unprecedented domestic crude oil production, which directly supported the economies of several Central and Midwestern states, according to a new report from a top U.S.-based market research firm.

“It is clear from this study that enhanced trade between our two nations has produced a paradigm shift. For years, policymakers have talked about North American energy security. We now have it. We have it because of this important trade relationship coupled with the ingenuity of the oil and natural gas industry on both sides of the border. We must collectively urge policymakers to value this partnership and to promote this important trade relationship that has been so beneficial to our two great countries.”

During his keynote speech, Macchiarola shared three key takeaways from the report, which was comissioned by API:

Takeaway #1: The Canadian and U.S. Oil Markets Are Integrated More Than Ever

The data show that now more than ever, oil markets in Canada and the United States are strongly linked. One of the driving factors behind the increase in cross-border market integration is the sheer increase in volume of Canadian crude being shipped to U.S. refineries; in 2019 approximately 3.8 million barrels per day (b/d) of crude oil was imported from Canada. The increased market integration was also led by the flow of U.S. crude oil primarily from the Gulf Coast to refineries in Canada’s eastern-most provinces; approximately 0.3 million b/d were transported along that route in 2019. 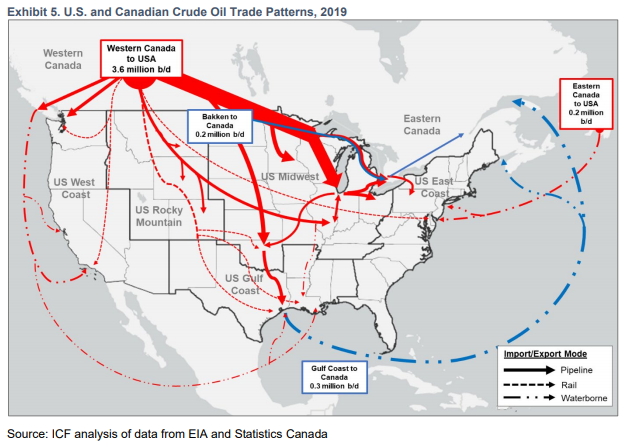 Crude production in the United States grew year-over-year from 2010 to 2019, with the exception of 2016, reaching an all-time average high of 12.25 million b/d in 2019. The increase in domestic production led to greater amounts of domestically refined crude—ultimately leaving the United States to drastically decrease the amount of imported foreign crude. 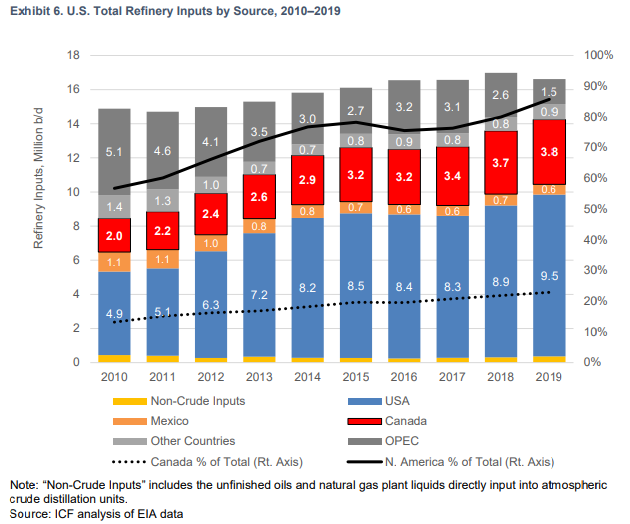 With a significant increase in U.S. crude being refined domestically, the United States – and North America as a whole – strengthened its energy security and dramatically decreased the region’s dependency on foreign oil. Whereas U.S. refineries imported nearly 6.5 million b/d from OPEC and other countries in 2010, the United States imported only 2.4 million b/d in 2019—roughly a 67 percent decrease.

U.S.-Canadian cross-border crude oil trade led to several economic benefits for Central, Midwestern, and West Coast states which have crude oil refineries. The Midwest region processed the most heavy and other crude oil imports from Canada in 2019, representing 66 percent of U.S. refinery inputs with an average of 2.51 million b/d for the region. 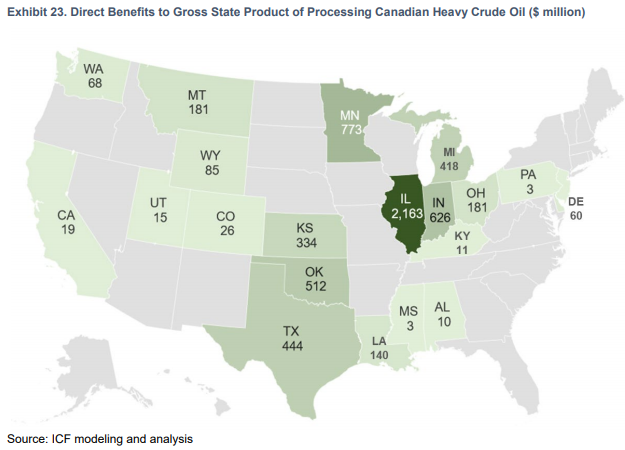 The cross-border petroleum trade between the United States and Canada throughout the past decade significantly shifted both countries’ economies, and levels of energy security, for the better. The energy policies and stable relationship between both nations cannot be understated, as the resilency—and future—of both countries rely on it.