Report On Shift To Renewables Jobs Leaves Out Key Details

A new Brookings Institution report makes the case that fossil fuel industry workers in areas of the country where such jobs are plentiful could easily transition to the renewables sector, but the analysis leaves out key details that would have major implications for workers.

The report argues the geographic locations of major fossil fuel communities align well with solar and wind potential. It says its database of potential sites for renewable energy production found:

“In total, a quarter of the counties in the U.S. with the greatest potential for both wind and solar electricity generation are also fossil fuel hubs.”

Many states have already benefitted by embracing an all-of-the-above energy strategy that enables renewable job creation alongside prolific oil and gas employment. Texas, for instance, leads the country in natural gas, oil, and wind production. Renewable jobs aren’t displacing oilfield jobs there, but rather creating additional employment opportunities. But as the study acknowledges, even if these wind facilities were replacing oilfield jobs, this strategy won’t work everywhere:

“Of course, not every fossil-fuel-dependent community is well situated within the clean economy. And not all workers susceptible to job displacement will instantly find new careers or easily transfer their skills and experience. Energy workers in certain Kentucky, Minnesota, and West Virginia counties, for example, may need different kinds of community assistance programs because renewables may not be competitive in those locations.”

While the report puts forth an encouraging primary thesis that major basins supporting oil, natural gas, and coal workers – especially those in the Great Plains and the West – are located in prime sunny and windy areas, the study focuses on macro issues while ignoring many of the practical implications such a transition would have on workers.

Here are the key details left out from the Brookings Institution report:

The analysis makes good use of visual data to show the areas with a heavy concentration of fossil fuel workers, underscoring the major role that states like Colorado, New Mexico, North Dakota, Texas, and Wyoming play in our energy industry. 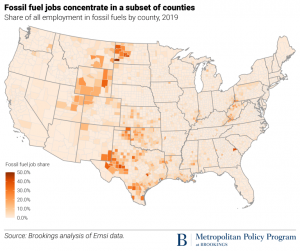 But the report never states if there are enough jobs in the renewables sector to provide gainful employment for every person who might lose their job in the oil, natural gas, and coal sectors. The Brookings Institution counts 1.7 million Americans who worked in fossil fuel industries in 2019, while the group E2 reported that solar and wind only employed 446,000 workers that same year.

While a major increase in solar and wind production would create more jobs in those sectors, would there be enough labor force opportunities for all of the workers in Brooking’s so-called “fossil fuel hubs” who are facing displacement?

In fact, as part of the discussion on support for fossil fuel workers, the report even concedes:

“… the current labor demand for fast-growing renewable energy jobs may still lag behind fossil fuel industries in the next few years and may not supplant all existing jobs.”

No Mention of Competitive Pay

Once more, the visual data from the Brookings Institution does well to show the geographic impact of solar and wind. 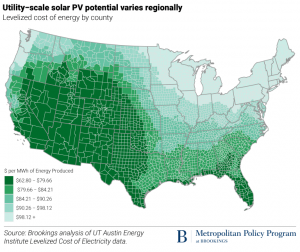 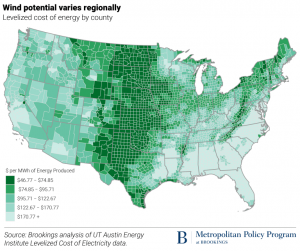 But the emphasis of the report is on the generation costs of solar and wind in these areas, which are no doubt important metrics for both the balance sheets of energy companies and pocketbooks of consumers.

However, the report glosses over the financial aspect of the workers at these solar and wind installations, acknowledging:

“Not all renewable energy jobs offer higher pay or are more unionized than fossil fuel jobs, and some of these workers may not be able to easily translate their skills or experience.” (emphasis added)

Will former fossil fuel workers earn a paycheck in the renewables sector that’s competitive with the salary from their oil, natural gas, and coal jobs?

But the current labor market advantages fossil fuel workers. The Bureau of Labor Statistics reports that oil and natural gas workers earn $47 per hour on average while solar and wind workers average $22 and $26 per hour, respectively.

Uncertain Commitment to a “Just Transition”

Job availability and security for displaced workers, as well as competitive pay are important factors that need to be included in decisions that impact the livelihoods of workers across the country. As the authors explain:

“Fossil fuel industries can offer wages above the national median, may not require much formal education beyond high school, and can provide on-the-job training and promote technical skills related to energy. … Even as many fossil fuel industries have shed jobs over the last few years—including through the continued phase out of coal—no community rich in fossil fuel jobs would willingly want to give up even more without a clear alternative.”

To meet this challenge, the authors recommend a “just transition” that includes the federal government offering financial assistance to communities in need, education and training programs, supporting public and private investment in local and national companies that are creating solar and wind jobs.

While the “just transition” may be a noble cause, in reality, that so-called pledge is actually leaving workers behind. As Energy In Depth has noted, the economic pinch is happening immediately with no support for workers who face job losses. This, despite the Biden campaign’s climate plan that definitively stated: “We’re not going to leave any workers or communities behind.”

Likewise, elected leaders and environmental activists who have touted a “just transition” have been quick to cheer market events and government decisions that led to job losses in the fossil fuel industry with no backstop for workers.

Beyond political swings, there are practical issues with the “just transition” as noted in a Colorado Sun story on the shift to renewables in power generation:

“‘It is getting harder and harder to find opportunities for impacted workers,’ Rich Meisinger, business manager of IBEW Local 111, which represents utility industry workers, said during the video conference. ‘You can’t just transfer them to another power plant,’ Meisinger said.”

As the country undergoes an energy transformation, the reality is that oil and natural gas will continue to be needed for years to come. The challenge of ensuring workers who produce these critical resources don’t get left behind is much more complex than simply replacing one job with another.

As states across the West and the Great Plains have shown, a strong energy industry can and should be built on both fossil fuel and renewables resources. This all-of-the-above strategy has helped make the United States an energy powerhouse that generates gainful employment and strong wages for these workers.

The post Report On Shift To Renewables Jobs Leaves Out Key Details appeared first on .