Production of natural gas in Texas remained strong enough to meet the increased demand during February’s historic winter storm and power losses across the supply chain, according to a new report commissioned by the Texas Oil & Gas Association. As TXOGA president Todd Staples explained:

“Missing from many of the post-storm accounts and opinion pieces is the remarkable way natural gas stepped up to power the vast majority of electricity generation in Texas during the storm. On an annual basis, natural gas represents about 48 percent of Texas’ electric power generation. 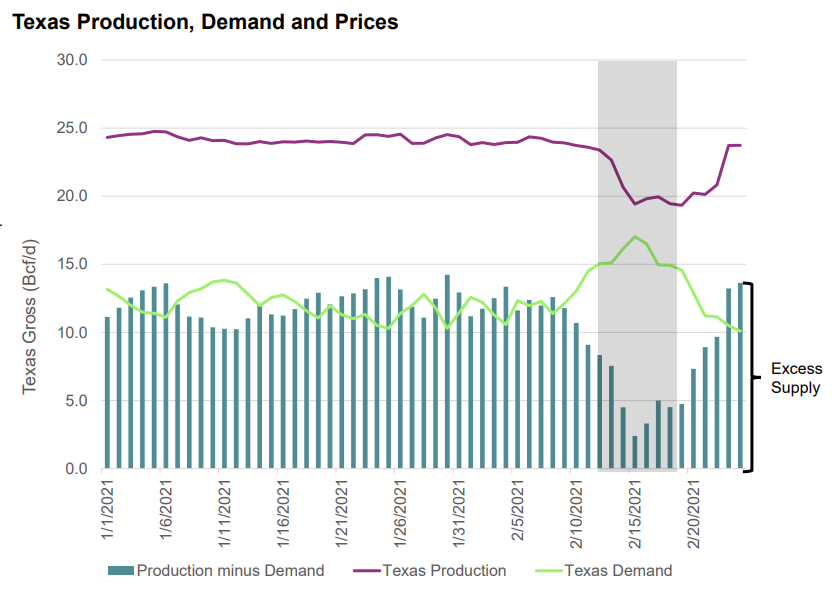 While every energy source, and the entire power grid, faced enormous challenges, the TXOGA analysis shows once again that natural gas was the key fuel for Texas during the storm, as Energy In Depth has previously noted. As the analysis explains:

TXOGA’s analysis, which included polling of upstream and midstream companies across the state, found that power outages were a primary factor in reductions and shutdowns of natural gas production and transportation throughout the extreme weather event. As the report explains:

“Once power outages began, natural gas production was impacted because surface facilities and infrastructure relies heavily on electricity for operations, which then exacerbated the ability for power generators to receive natural gas supplies.” 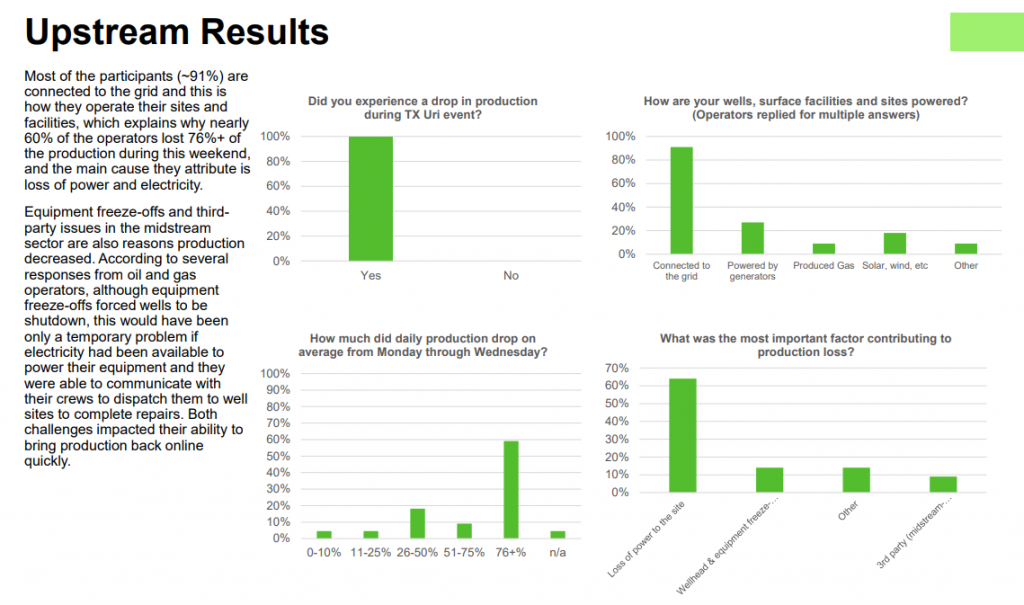 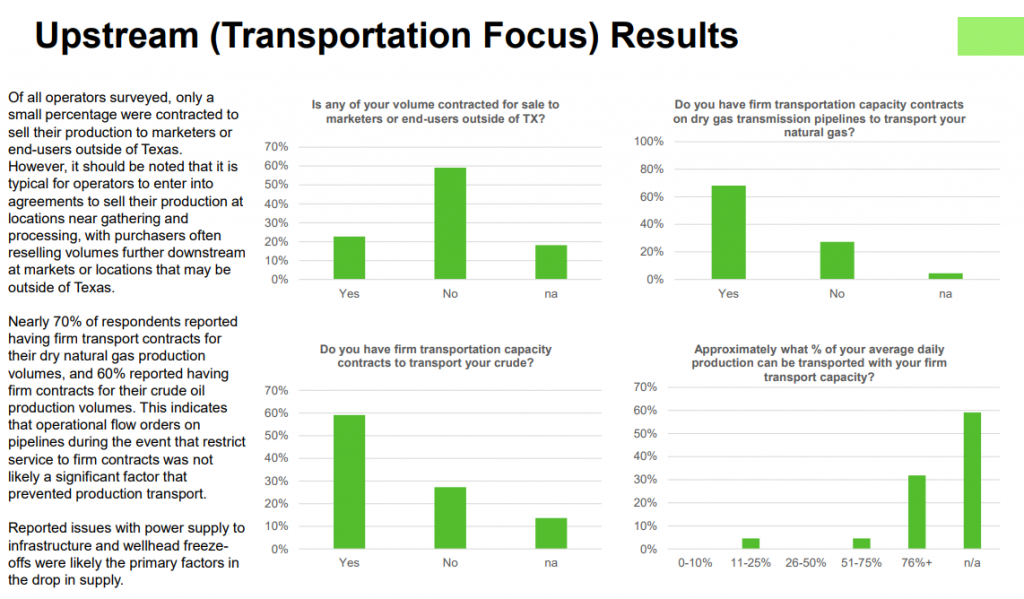 As TXOGA acknowledges, “matching supply with demand proved challenging,” particularly when demand spiked so significantly. The report explains that power demand declined after February 14, but “power service necessary for natural gas midstream infrastructure to operate was offline and remaining available natural gas supplies were prioritized for home heating. Residential/commercial natural gas demand was more consistent through the peak period. The industrial facility sample decreased over the same time period, as service to homes for heating and power plants was prioritized.”

Finally, the analysis highlights the fact that “natural gas storage withdraws increased” as demand surged, and that “a record-high withdrawal of -156 Bcf was reported by the Energy Information Administration for the week ending February 19.” This storage capacity provided critical in meeting the increased demand:

“There are five natural gas storage facilities observable in the pipeline flow data. Storage activity around Winter Storm Uri is shown in the chart. Even though the sample is small (~15 percent), it provides some insight into how storage facilities responded during this critical time.” 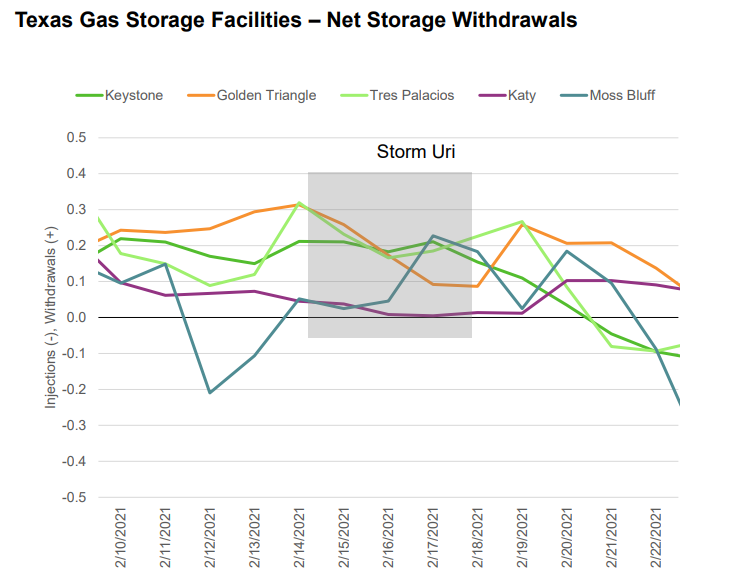 Energy In Depth has previously noted the need for robust natural gas storage capacity, and as the TXOGA analysis show, that supply played a major role in helping the state weather the storm.

“The gas system and the electric system … are not just two systems that can co-exist separately with touchpoints. Gas reliability and electric reliability are inherently connected. One of the issues that we see, and we see this clearly in California, because we have the most solar buildout in California, is the ability of the gas system to support very rapid power plant ramps. Particularly in the afternoon, when solar comes off, the power demand continues to grow and natural gas is currently the only resource that can meet that peak, and the amount of gas that those power plants suck out of the gas system is extraordinary, and storage turns out to be one of the key assets to be able to maintain pressure in the gas system in that scenario.”  (emphasis added)

There are many lessons to be learned as more analyses of the storm and what occurred in its wake come out. As Staples said:

“During the February winter storm, failures occurred up and down the line of our state’s electricity system and every sector must improve. This analysis makes clear that the issues with natural gas production and transportation began with outages originating at the power generation units. Texans deserve a serious, thoughtful, factual evaluation of what really went wrong. Along with many stakeholders, the Texas oil and natural gas industry continues to assess the entire operational process to develop specific solutions to better protect Texans against future emergency situation failures.”