A ban on federal oil and natural gas leasing would have devastating effects on the U.S. economy and environment, according to a newly released report. The American Petroleum Institute report, prepared by energy consulting firm OnLocation, found that the ban could cost the United States $700 billion in GDP, nearly 1 million jobs and $9 billion in government revenue.

Though many may not realize it, federal lands play an important role in energy production. Energy produced on federal lands and waters accounted for 12 percent of U.S. natural gas production and nearly a quarter of U.S. oil production. If this production fell out, the United States would spend $500 billion more on energy from foreign suppliers through 2030 – putting American energy security at risk.

Limiting the leasing of federal lands and waters would not only cut production, but would result in stark impacts for the states and communities where this productions is concentrated.

For example, a federal leasing ban would have troubling effects on oil and natural gas production in the Permian Basin, where much of the drilling in southeast corner of New Mexico occurs on federal lands. If these lands were rendered inaccessible to energy producers, the Land of Enchantment would see its oil and natural gas production nearly halved, jeopardizing much-needed jobs, tax revenue and community investment to rural regions of the state. In 2017, New Mexico had one of the highest poverty rates in the country – 19.7 percent of the state lived below poverty level.  The report found a federal ban on leasing would cost the state 62,000 jobs by 2022, and put $1.1 billion of revenue for the state at risk.

Like New Mexico, the Gulf Coast would also experience negative economic effects. Offshore oil and natural gas production provides jobs to coastal towns from Texas to Louisiana, and stands to lose 203,000 by 2022 if that production vanished. Compounded by the $223 million in state reimbursements that would also be put at risk, the gulf coast faces severe consequences from any federal leasing ban. 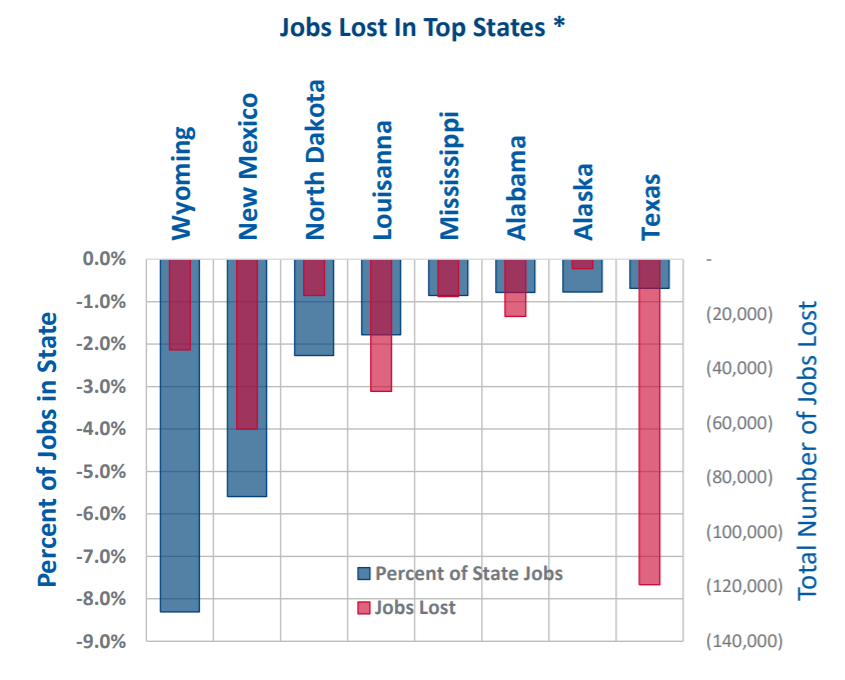 Beyond staggering economic consequences, API’s report illustrated the environmental affects a federal lands and water leasing ban would have in the United States.

In 2020, thanks to energy production on federal lands and waters, over $227 million has been apportioned from the Land and Water Conservation Fund (LWCF) for recreation and conservation projects across the United States. This number has only grown since 2019, due to an increase in offshore leases. Aside from the money that goes directly to conservation efforts, stopping federal leasing would also hamper the transition from natural gas to coal. According to the report, the loss of federal leasing production would keep around half the coal capacity that would otherwise be retired by 2030.

API President and CEO Mike Sommers summarized the multitude of dangers posed by a ban most aptly:

“Banning federal leasing and development on federal lands and waters would derail decades of U.S. energy progress and return us to the days of relying on foreign energy sources hostile to American interests… It’s clear a federal leasing ban should be off the table – there’s far too much at stake for American workers, local economies and our nation’s energy security.”